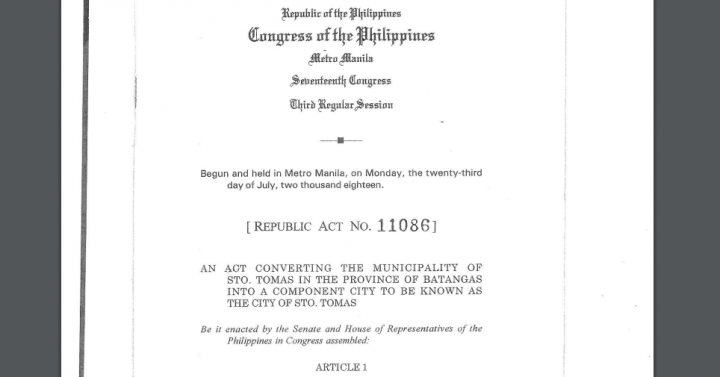 MANILA – Do you know that at least 13 of the current 146 cities of the country created since 1901 bear the names of saints or religious figures with the names “san”, “santa” or “santo”?

Yes, these are the towns of San Juan in the National Capital Region; San José in Nueva Ecija; San Fernando and Angeles in Pampanga; San José del Monte in Bulacan; Santiago to Isabelle; San Pablo, Santa Rosa and San Pedro in Laguna; San Carlos in Pangasinan and Negros Occidental; San Fernando in La Union; and Santo Tomas in Batangas.

Prior to their existence as a city, they were also former cities of their home provinces, according to combined data from the Manila Bulletin Yearbook released on February 2, 2015 and the Philippine Statistics Authority (PSA).

The city of San Juan, ancient city of the province of Rizal and site of the famous Pinaglabanan monument of 1896, was named after Saint John the Baptist, one of the 12 apostles of Jesus Christ whose feast falls on June 24 .

It was weaned from Rizal Province and incorporated into Metro Manila in 1975 by Presidential Decree No. 824. It became a city during the time of President Gloria Macapagal-Arroyo by Republic Law No. 9388 in March 2007.

The town of San José in Nueva Ecija, as the name suggests, is named after Saint Joseph, the earthly father of Jesus Christ. It became a city under Republic Law 6051 signed by President Ferdinand E. Marcos on August 4, 1969.

Before becoming a city, Santiago was one of the most developed cities of Isabela in Region 2 (Cagayan Valley). It was converted into a city through RA 7720 signed by President Fidel V. Ramos on May 5, 1994.

In Pampanga, the city of Angeles (which literally means the holy guardian angels) was converted into a city under RA 3700 signed by President Diosdado P. Macapagal and entered into force on January 1, 1964.

Also in Pampanga, the former capital of San Fernando was converted into a city under RA 8990 approved by Arroyo on January 26, 2001.

Another former capital, San Fernando in La Union, was established as a city under RA 8509 signed by Ramos on February 13, 1998.

On June 18, 1960, the city of San Carlos in the province of Negros Occidental was transformed into a city under RA 2643 signed by President Carlos P. Garcia.

Five years later, a town of the same name, San Carlos in Pangasinan, was established as a town under RA 4487 approved by Marcos on June 19, 1965.

The city of San José del Monte in Bulacan, one of the three cities of the province after Malolos and Meycauayan, was born in September 2000 by RA 8797 signed by President Joseph Estrada.

The city of San Pablo in Laguna was created by President Manuel L. Quezon by Commonwealth Act 520 which he signed on May 7, 1940. It was the first city of Laguna.

Another municipality of Laguna, San Pedro, became a city on March 27, 2013 through RA 10420 signed by President Benigno S. Aquino III.

The 146th and youngest city in the country, Santo Tomas à Batangas, was converted into a component city in 2018, via RA 11086. It is the only city created to date under the administration of President Rodrigo R. Duterte. (ANP)