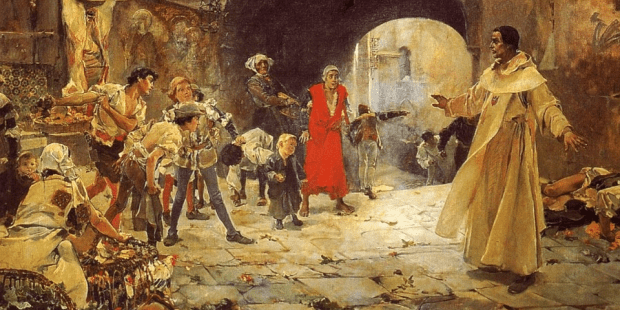 Pr. Joan Gilabert Jofré rescued a mental patient from bullies and then founded the “Hospital of the Innocents”.

A Catholic priest founded the world’s first psychiatric hospital. Surprised? We shouldn’t be. This is just one of the many contributions the Church has made to humanity that most people are unaware of, even Catholics.

It was Friday, February 24, 1409. Fr. Joan Gilabert Jofré was leaving the convent of Plaza de la Merced, in Valencia, Spain. On his way to the cathedral, near St. Catherine’s Church, he saw a group of young men taunting and assaulting a man. Shouting, they called him “Crazy, crazy!”

In fact, it was obvious that it was a mentally ill man. The priest courageously repelled the attackers, protected the poor man and took him to the Mercedarian residence.

Pr. Jofré himself was a mercédaire friar, that is to say a priest belonging to the Order of Mercy, in which he had entered in 1370.

The Mercedarians and Our Lady of Mercy

The mercedaries still exist today and the community is over 800 years old. The order was founded on August 10, 1218 in Barcelona. In addition to the traditional vows of poverty, chastity and obedience, its members took a fourth vow: to devote their lives so completely to freeing slaves that they would even trade places with captives who were in danger of losing their faith – or if the order had no money to buy their release.

One of the best known Mercedarians is the founder, St. Peter Nolasco. He was a great liberator of Christians who were kidnapped by Muslims and taken as slaves to North Africa. The saint even sold the heritage he had inherited from his family to organize rescue expeditions. When he ran out of resources, he started begging for alms and donations. When he also ran out of alms and donations, St. Peter Nolasco pleaded with God for a miracle. It was then that he received an apparition from Our Lady, who asked him to found a congregation dedicated to the rescue of slaves. This is the origin of both the Order of Mercy and the devotion to Our Lady of Mercy.

It was at the Mercedarian residence that Fr. Jofré lodged this poor man who was harassed because of his mental disorders. From then on, Jofré began to promote not only charity towards the mentally ill, but also the creation of a specific hospital for them.

Pope Benedict XIII learned of the initiative and authorized the works by the bull of May 16, 1410. The hospital was placed under the spiritual patronage of the Virgin Mary under the title of Our Lady of the Innocents.

Things move quickly: on June 1, 1410, the Hospital of the Innocents is born to receive the mentally ill, the poor and abandoned children. The hospital chapel was dedicated to Our Lady of the Impotents. This first hospital in the world to offer care and residence to the mentally ill became the current University Hospital of Valencia.

Pr. Jofré spent a season carrying out evangelistic missions with Saint Vincent Ferrer. Shortly after returning to the monastery, he died on May 18, 1417. Despite several setbacks due to historical circumstances and not to the life of Fr. Jofré himself, his canonization process is underway but not forgotten.