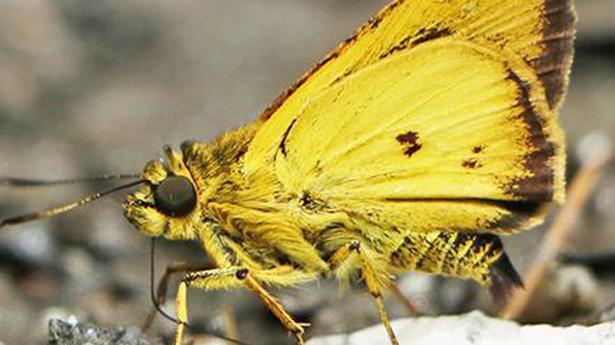 When Sonam Wangchuk Lepcha, from Dzongu in North Sikkim, began to observe butterflies and take pictures of them, he was not taken very seriously by the people around him. But now his hobby has led to the discovery of a new species of butterfly, the closest relatives of which are in southeastern China, near Hong Kong.

Since 2016, Mr. Wangchuk Lepcha has been in the habit of photographing butterflies and sending their photos to entomologists based at the National Center for Biological Sciences (NCBS), Bengaluru, to identify them and upload them to the â€œButterflies of Indiaâ€ website. That they maintain. In 2020, he contributed the image of a golden yellow butterfly with brown borders and spots.

All sightings submitted on this website are reviewed by a panel of experts, including Krushnamegh Kunte of NCBS, who counts Lepidoptera or butterflies as one of his primary research interests. â€œExamining Sonam’s image, I realized that this is a species previously unknown to India and in fact, it may be a new species,â€ says Dr. Kunte.

His group asked Mr. Wangchuk Lepcha to get permission from the Sikkim Forestry Department to study the butterfly, and then they examined it further.

The new species of butterfly, now known as the Chocolate-Lined Flitter, also bears the scientific name Zographetus dzonguensis, after Dzongu in northern Sikkim, the place where it was discovered. His closest relatives are Zographetus pangi in Guangdong and Zographetus hainanensis in Hainan, both in southeast China, near Hong Kong, says Dr Kunte.

The physical appearance of the species differs slightly, and the internal structures of males also differ slightly. Details were published in an article by Zootaxons December 1.

“We haven’t done genetic studies yet, but we hope to do them next year, once we are fully functional when the pandemic is over,” adds Dr Kunte.

Mr. Wangchuk Lepcha, author of the article, recalls that on May 5, 2016, while on his way to Namprickdang, he was struck by the number of different butterfly species he observed and tried to count them – that very evening he had counted 50 different species of butterflies in that area. Since then, he has photographed more than 350 different butterflies from the Dzongu region.

“I heard that the Lepchas of Sikkim and Darjeeling were excellent butterfly catchers and were good at naming them in our own language, but we have forgotten all of Lepcha’s names for butterflies now,” Wangchuk Lepcha said in a message to The hindu. The common name Lepcha for butterflies is thamblyok.

Mr. Wangchuk Lepcha mentions a place of historical interest near Dzongu called Blykovoo, which means “the land of butterflies”.

Evidencing the rich population of butterflies in Dzongu, Dr Kunte says that there was himself rediscovered a species of butterfly lost in 2008, not far from the area where Mr. Wangchuk Lepcha saw the chocolate-rimmed Flitter. “This species was the rare jester (Symbrenthia silana). It is legally protected in India under Schedule I of the Wildlife (Protection) Act, 1972, which also protects iconic animals such as the Asian elephant and the snow leopard, â€adds Dr. Kunte.