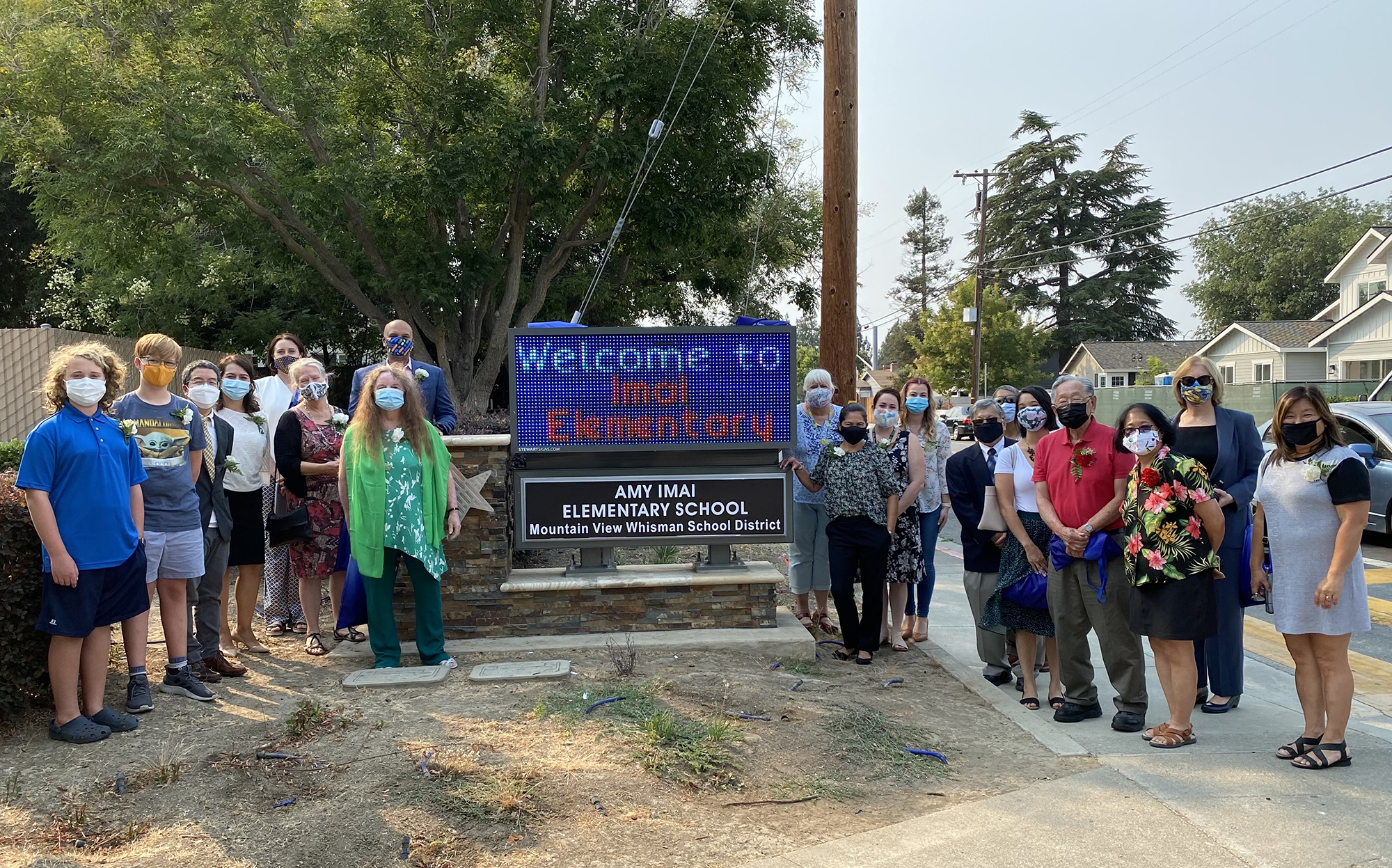 Amy Imai has spent her life sharing her experiences as a Japanese American interned during WWII in the hope that the past would never happen again. Now Mountain View students attend an elementary school named in his honor.

The Mountain View Whisman School District Board of Directors voted unanimously earlier this year to rename the Frank L. Huff Elementary School after it emerged that Huff, a local education leader in the in the early 1900s, espoused racist and anti-immigrant views.

Born in 1930, Imai lived in Mountain View with her family until they were forced to move to an internment camp during World War II. Once released, Imai returned to the Bay Area and eventually relocated to Mountain View.

Prior to her death on New Years Eve in 2013, Imai was deeply involved in the Mountain View Buddhist Temple for decades, supported the Mountain View Sister Cities program, played a role in local politics, and spoke in local schools during his stay in the internment camp.

â€œShe had a huge impact in her community, but in some ways it was a quiet impact,â€ said school board president Devon Conley. “It was unwavering, it was persistent.”

Imai was the second oldest of four children. His younger brother Arthur Kunimoto, the only surviving brother, remembers their family living on Eunice Avenue, a few blocks from the school that now bears his sister’s name.

After the Pearl Harbor attack, the family were sent to the Heart Mountain War Relocation Center in Wyoming, where approximately 14,000 people were confined over a three-year period. It made no difference that his father was a World War I veteran.

In her final year of incarceration, Imai worked as a cook and waitress at the camp hospital, according to an article and oral history interview with Imai from the Japanese American Museum in San Jose.

After the family was released and allowed to return to California, Kunimoto said he recalled feeling animosity from some members of the community and finding businesses that refused to serve Japanese Americans.

â€œIt wasn’t easy to get a haircut,â€ Kunimoto said with a chuckle.

The family worked as sharecroppers in the Cupertino region, picking berries, Kunimoto said. Amy helped take care of the siblings, acting in many ways as a second mother, he said.

Imai graduated from Fremont High School in Sunnyvale and was one of the graduation speakers, according to her obituary.

Kunimoto said her sister got a scholarship to the state of San Jose, but ultimately did not attend because their father objected to her going to college.

For many decades, Imai has been active in the Mountain View Buddhist Temple, including teaching the Dharma School for over 45 years and helping to coordinate funeral receptions.

Imai was also known to have constantly spoken about her experiences of internment. She would go to schools, libraries and other community gathering places to talk about her own story.

â€œIt was really important for her to let people know what happened to her,â€ said Leslie Imai. “She wasn’t angry, she just wanted people to be aware and not forget, so that it wouldn’t happen again.”

Mountain View City Council member Margaret Abe-Koga remembers her own daughters listening to Imai speak at the Buddhist temple. Listening to the point of view of the internment in the first person opened my eyes, said Abe-Koga, especially because it is a frequently overlooked chapter in American history at the ‘school.

Imai was also interested in local politics, running unsuccessfully for the Mountain View Los Altos Union High School district board in 1981, according to historical records from the county registrar of electors.

â€œPolitically, she would have done well, but she was born at the wrong time,â€ Kunimoto said.

Despite his own loss, Imai worked to help other Asian American candidates. This included Abe-Koga herself. After moving to Mountain View in the late 1990s, Abe-Koga said she was introduced to Imai, who helped her become more involved in the community and was one of the early supporters of ‘Abe-Koga to run for city council.

â€œShe really took me under her wing when I got to Mountain View,â€ said Abe-Koga, who grew up in San Mateo and considers Imai a mentor.

When school board members asked Abe-Koga for suggestions for new namesakes, she said Imai immediately occurred to her. Imai was a particularly timely choice, said Abe-Koga, given the recent increase in incidents of anti-Asian hate.

Imai’s niece Lisa Sato, daughter of Arthur Kunimoto, spoke of the recent increase in anti-Asian sentiment and violence, saying she appreciated the school district taking a stand on its choice of name change.

Sato didn’t really know his aunt until she moved to the Bay Area as an adult. Once she did, Sato said she came to appreciate Imai’s impact on her family and the community at large, calling her a “natural leader.”

â€œWatching how she addressed people and made connections was just amazing,â€ Sato said.

When Imai passed away in late 2013 at the age of 83, Sato said she realized how appreciated her aunt was when hundreds of people showed up for her funeral, which she said was broadcast on closed circuit television because so many people came to pay homage to it. . According to Leslie Imai, more than 700 people attended.

Imai was a “legend” in the family, known for being non-judgmental and treating people with respect, Sato said.

â€œWhenever I think of taking the higher road, I think of Amy,â€ she said.

Naming a school in Imai’s honor and discussing the history of Mountain View with immigrant populations, Conley said the community is “closing the circle of justice” and trying to right some of its old wrongs.

â€œShe wanted to make sure that what happened to her and her family didn’t happen again in the future,â€ Conley said. “It’s a really powerful legacy. What an incredible example for our children.”

Leslie Imai said she was honored to hear that her stepmother’s contributions would be remembered.

â€œTo have an Asian American nominated for something like that, especially considering who Frank Huff was and his specific bias towards Asian Americans, was very fitting,â€ she said. .

Evidence for Huff’s racist views includes a historical account from 1922 that says Huff “sincerely believes in America for Americans and strongly opposes immigration to our country of people who are not in tune with the institutions. and American ideals, especially those of such blood. as cannot be assimilated by the Caucasian race for its own benefit.

The new name of the school will give students the opportunity to learn more about the history of the Japanese internment, Conley said, adding that the symbols are important and “carry a weight in the heart and mind. of our children and our families whom we cannot underestimate “.

In recent years, several districts in the Bay Area have removed namesakes from schools for holding racist or offensive views. This includes the Palo Alto Unified School District, which renamed two schools in 2018 because the former namesakes, Lewis Terman and David Starr Jordan, were strong supporters of eugenics.

Sometimes the renaming of schools has become controversial. The San Francisco Board of Education earlier this year suspended a heavily criticized plan to rename 44 schools.

Conley said she knew of a certain goal in removing the names of offensive historical figures, but said she believed that “we can teach our students about our history and also create justice in the world by raising symbols that represent what we want to be as a community. “