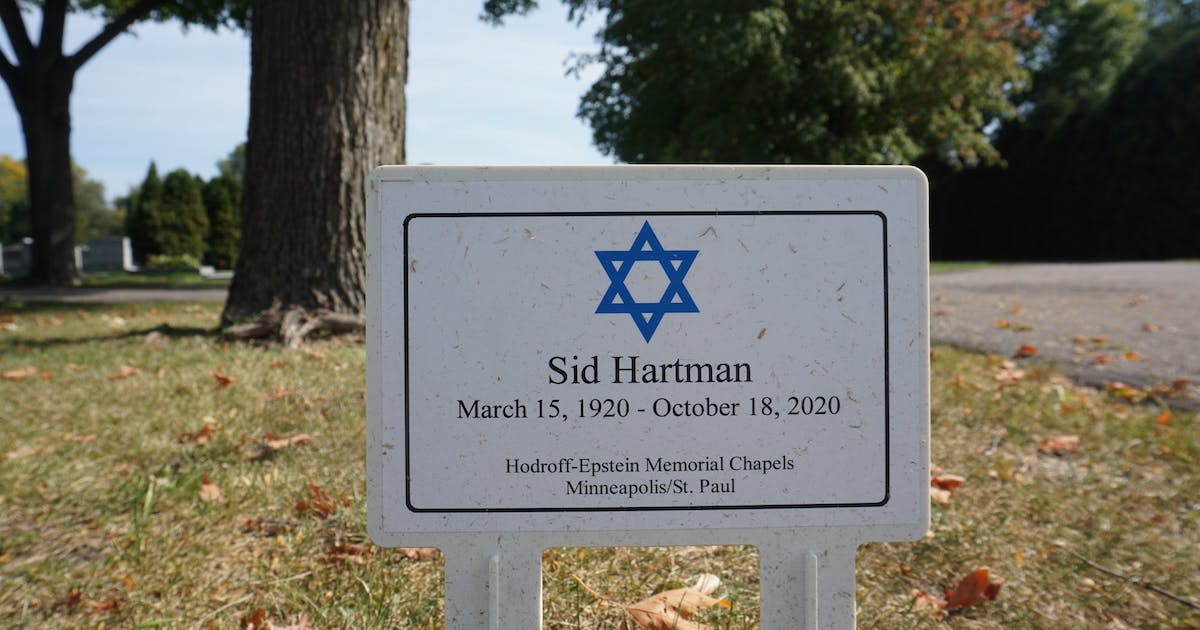 The Minneapolis Jewish Cemetery is in front of a several-block stretch of small businesses heading south on Penn Avenue, half a mile from Highway 62 in Richfield. It wasn’t until mid-summer when I parked under a cluster of trees and saw the wave of headstones that I realized it was going to be impossible to find Sid Hartman.

Because he died during the COVID-19 era, there was no public memorial. No large gathering of family, friends and colleagues. I went through the grief of losing someone at that point the only way I could, sitting at home.

But months after his death, something told me that this desire was going nowhere.

Late that night, lying in bed, my face lit by a cell phone, I typed “serious Sid Hartman” into a Google search.

The first result was for a website called Find a Grave.

He told me that Sid Hartman was buried in the Minneapolis Jewish Cemetery in Richfield.

I didn’t know such a thing existed until I did. And then I had no excuse.

Yet as I parked at the cemetery, my naivety hit me dead in the tracks as I turned off the engine and realized that just because you can find a cemetery doesn’t mean you can find a grave.

I wandered around for a while and couldn’t find what I was looking for. No Sid. No one I know. Just the unknowable beauty that life gives us all. The rolling whistle of insects, the laser whistle of a cardinal, the Gordons and the Meshbeshers and the Sigels and the Roths.

I’ve watched Sid go to work for the last decade of his life. I transcribed his interviews, helped him compile statistics and edited his copy. I watched him move through a journalistic landscape that he refused to let pass.

It seems impossible to think that the last story we worked on together in person was chronicling his 100th birthday. March 15, 2020. It was a year ago, Monday, he passed away, October 18.

I return to the cemetery a week later, and as I scan the graves I begin to note the ages and think how blessed Sid was to live as long as he did, but how little to care.

It was, without qualification, his most incredible professional talent. Age meant absolutely nothing to him when he went to work.

I see the grave of an 18 year old. Died in 1942. I wonder if he went to fight for his country and did not return home. But I do not know.

I am obsessed with finding someone who has lived longer than Sid. It takes a while, until:

Daughter of Samuel and Jennie Lasky

What are you doing even with this amount of time? The end of the First World War at 18. The start of World War II at the age of 38. John F. Kennedy assassinated when she was 63 years old. He has 40 years left.

I try to visualize an unknowable person, turn around and see Sid’s brother’s grave. And I know.

See a small white sign with the Star of David that says:

Take off your hat and shoes.

Stand up straight. Smell the parched grass between your toes.

Sit down, resist the urge to lie down, spread your fingers on the ground, dig your fingers into the earth, notice the plastic fence that tries to make the grass grow, the anthills growing in the drought, the sky who breathes, the distant hum of a lawn mower, the little stones placed above him, his family plots beside him, the shadow of the maple like a blessing above his head.

Say, I hope you find peace.

Say, what a blessing you have been.

Tell him what’s new with the Gophers.

It’s not the first time I’ve spoken to him since his death, but the last time it was at a bronze statue of Sid in downtown Minneapolis.

This statue is very realistic. And if, say, you found yourself in a deserted cityscape at 4 p.m. on a random April afternoon with 1,600 fans returning to Target Center, you might have found yourself completely alone watching it.

Then you might have found yourself talking aloud to this statue, and starting to feel uncomfortable, you felt your normally rational mind irrationally thinking that it was about to start responding.

So it did not provide the usual feeling of communicating on a spiritual level.

Still, it helped me realize how isolated I was in my job. How much I had depended on her routine and her self-confidence. How much I missed what it meant to show up and be forced to share space. What it meant to matter, in a desperate capacity, to someone professionally.

But whatever part of the spectrum I was on, one thing I realized when he left and started a new job was that professional growth was not a substitute for meaning something to someone. ‘a.

After I leave the cemetery, I go to my basement, pull out a box, and pull out the only two books Sid has ever given me – his biographies.

I take them upstairs and put them on my shelves.

I put a framed photo of us just outside the left edge of my computer.

I used to want to separate Sid so violently from my personal life that I wouldn’t think of displaying memories like that. I was an independent person, and this overwhelming personality was not going to subsume who I was.

When people asked me what I did for a living, I would tell them that I worked in the sports department of the Star Tribune, compiled boxscores and stats, and helped edit the copy.

I was loath to mention it. I refused to answer his calls on my days off. I have dozens of voicemail messages from Sid that are variations on a simple theme: â€œJeff, will you call me back, please?

I take these memories at face value.

At the time, I felt that what I was doing was absolutely necessary for my life.

And now I try to answer every phone call I get from my family.

And now when people ask me what I do at the newspaper, I say I worked for Sid.

But working at the newspaper right now means working in a room in my house, so I leave her where she is every once in a while and go back to the cemetery.

I can be there in 10 minutes if I turn on the Penn lights and walk past Vale Typewriter, Sandy’s Tavern with their world famous burgers, the seemingly closed Pickin ‘Parlor, and Cuernos Chuecos Western Wear.

You don’t really have to be here, but it feels good to communicate in this physical space – although it’s impossible to imagine being the driving force behind a conversation with Sid.

I sit down and find nothing significant to say.

I tell him what he missed.

I tell him Ryan Saunders was fired.

I tell him the Twins are having a tough year.

I tell him all the notes he has published.

I tell him the Vikings have a chance, if certain things fall into place.

I tell him that my son is almost 2 years old and he is talking a mile a minute.

I tell him that I have a new job and that it would never have happened without him.

I tell him that life is going well and that it would never have happened without him.

I tell him that life can be lonely without him.

And then I stop talking, look to the leaves above us and pray for the wind to pick up.

Jeff’s Day is a Star Tribune sports multiplatform editor and writer. Email him at [email protected]

RURCON seeks to collaborate with churches in Lagos