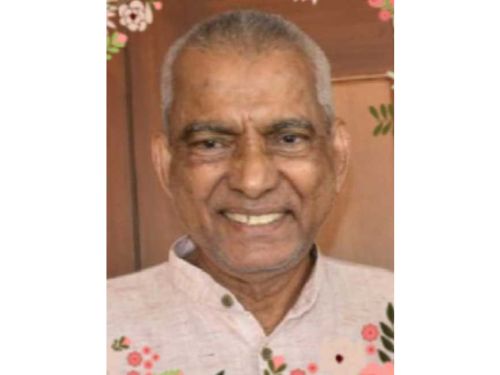 A tribute to my director, Father Lawrence Pinto Sj, a Jesuit priest of students and poor people

A tribute to my director, Father Lawrence Pinto Sj, a Jesuit priest of students and poor people

Mangaluru: It is said, “The best and most beautiful things in the world cannot be seen or even touched – they must be felt in the heart.” These are my feelings about Father Lawrence Pinto Sj, my former principal of St Aloysius High School, Mangaluru in 1975. The last time I and some of my classmates in the year 1975 met Father Lawrence Pinto Sj , it was January 4th 2020, after we all had a class reunion one day before meeting Father Lawrence Pinto and Father Denis Rasquinha Sj, (both principals at St Aloysius High School) while they were residing at the Fatima retirement home, Mangaluiru. We all loved our school days at St Aloysius and we cherish and always have fond memories of those past years. We still remember our strict and disciplined principal in upper primary school, Father Denis Coelho SJ, affectionately known as “Shivaji” (because of his appearance) and in high school, Father Denis Rasquinha SJ and Father Lawrence Pinto SJ. , which we all liked very much. dearly.

More than we were thrilled to meet our mentors, the Jesuit duo were also extremely amazed to see us and they were happy to interact with us. Surprisingly, even in this golden age, Fr. Rasquinha and Fr. Pinto recognized us and even remembered our names. A popular teacher and former principal of St Aloysius High School, (SAHS) Mangalore, Father Lawrence Pinto SJ (88) died at the city’s Father Muller Hospital on Thursday, December 16. He had served in the SAHS for 18 years, including 13 years as Director. He was also principal of St Joseph’s Indian Secondary School in Bangalore for three years, where he retired. After his retirement, he founded the Loyola Primary, Secondary and PUC School in Mundgod, Uttara Kannada District. Later he was also responsible for the establishment of the Loyola, Sindagi, Bijapur school. The funeral rites took place at the Fatima retirement home, Valencia, Mangalore, on Friday, December 17, at 4 p.m., where a large number of priests, nuns, former students, sympathizers, among others, made a last tribute to a great soul.

Father Lawrence’s first ministry was education, but it was education with a difference. As a manager for three years, I noticed him as a man of discipline but not with an iron fist, and also strict. However, he was affectionate and polite to the students and always helped students from lower class families. He had a great love for poor children. He always gave the opportunity to explain the evil he had or had not created before making a decision on the means to punish, this too so that the students learned not to make the mistake again and to learn a lesson from punishment.

Father Lawrence was simple, down-to-earth and soft-spoken. Born April 20, 1933 in Kinnigoly, he was the youngest of six children, so very reluctant to meet foreigners. He only had one older sister with whom he went to daily mass. He joined the congregation of the Society of Jesus on July 1, 1955; made his novitiate in Christ hall, he made his philosophy in Shembag and his theology in Kurseong. He was ordained on March 29, 1967; and his final vows on 08.15.1972. He was a promoter of vocations at Maison Gonzague (1968-70); Ass. director of St Aloysius high school, Mangaluru-1970-75; director of St Aloysius high school, Mangaluru-1975-88; principal of St Joseph’s Indian Secondary School, Bengaluru-1988-91; Pastor of Mundgod – 1991-99; Manager and Correspondent at Loyola School, Mundgod-1991-05; Director at Vivek Pragathi, Haliyal- 2005-09; Responsible at Center Sindagi- 2009-12; Spiritual Ministry at Fatima Retreat House, Mangaluru- 2012-14; Spiritual Ministry in Mundgod – 2014-15; Spiritual ministry in Loyola, Mangaluru-2015-16; and Convalesce at Fatima Retreat House, Mangaluru- 2016-2021

Fr. Jossie D’Mello SJ Socius Karnataka Jesuit Province, the PRO of Fr. Dionysius Vas SJ, current Provincial, said in his message: “Fr. Lawrence was simple, down to earth and soft-spoken. His first ministry was education. However, it was education with a difference. Working in the institutions of the city for several years, after his retirement he moved to Mundgod to open a school for the poorest of the poor. His pioneering spirit, courage and enthusiasm were amply rewarded as this school grew more and more into Loyola Institutions, a composite PU college welcoming children from all levels of society. With the passing of Father Lawrence, the Jesuit province of Karnataka lost a great lover of the poor, a pioneer in the field of education and a simple and compassionate human being. Our sincere condolences to the bereaved family members of Fr. Lawrence Pinto and to the members of the Fatima Retreat House, Mangaluru. Farewell, Father Lawrence, while waiting to see us again. United in prayer ”.

Father Lawrence looked serious, but he had a loving heart that took care of people. He had good relations with his priest and companion friends. He was the unifying factor among the members of his family. He has always played a dual role of pastor and teacher. He would arrive at school before everyone else after having duly completed his religious and social service work. He was a man of teamwork. All of these things made him so special. we learn that Father Lawrence suffered a lot during the end of his life. But he never complained about his illness or his pain. He was patient and endured all the pain until the end. He appreciated all the help he received from the doctors and nurses at the Fr Muller hospital.

Here are a few messages of respect to Father Lawrence Pinto Sj, from my 1975 classmates at St Aloysius High School, Mangaluru:

Father Lawrence Pinto was a good teacher, kind, polite and knew his subject well. He taught us science. I was afraid to miss the school bus and started to cry. He was adamant and even stuck my ears.
Later, I came home and told my mother what had happened, and she looked at me and said, “Madhu..Fr L Pinto is a good teacher then. He wants you to learn the subject “… What happened almost fifty years ago is still fresh in my memory.” He always called the Names twice .. Madhukar, Madhukar. He was well behaved and spoke less..I will miss you Sir..You are now at the feet of the Lord..Rest in Eternal Peace..Om Shanti ”- Madhukar S Rao

“Father Lawrence lived for the underprivileged and touched their lives in many powerful ways. He ensured that the Siddhis, Kurbas, Adivasi, Lambani tribes received an education. He built Loyola institutions in a remote area and was loved by students, teachers and parents. Our beloved director will be sorely missed. His contribution to society has been immense. Here’s a hidden treat – Father Pinto was the god child of my grandmother, the late Winifred Colaco and as such, I was one of her favorites. Father Pinto used to give me red swords and guppies and that’s how I developed a keen interest in breeding fish when I grew up. He was without a doubt a great priest and a great human being. May his soul rest in peace ”–Dr Anand Pereira

Father Lawrence had a bold and convincing voice. He was available for the pastoral and other needs of the people. Above all, he was aware that his mission was to educate young people and children, especially the poor. Father Lawrence Pinto, you have said goodbye to this world and we believe you are now living in the company of God. And yet, we hope you will continue to live here on earth in our minds and hearts. Farewell! So we pray: “Grant him eternal rest, O Lord, and may thy everlasting light shine upon him and may the souls of the dead find in thee rest and peace, Amen.”