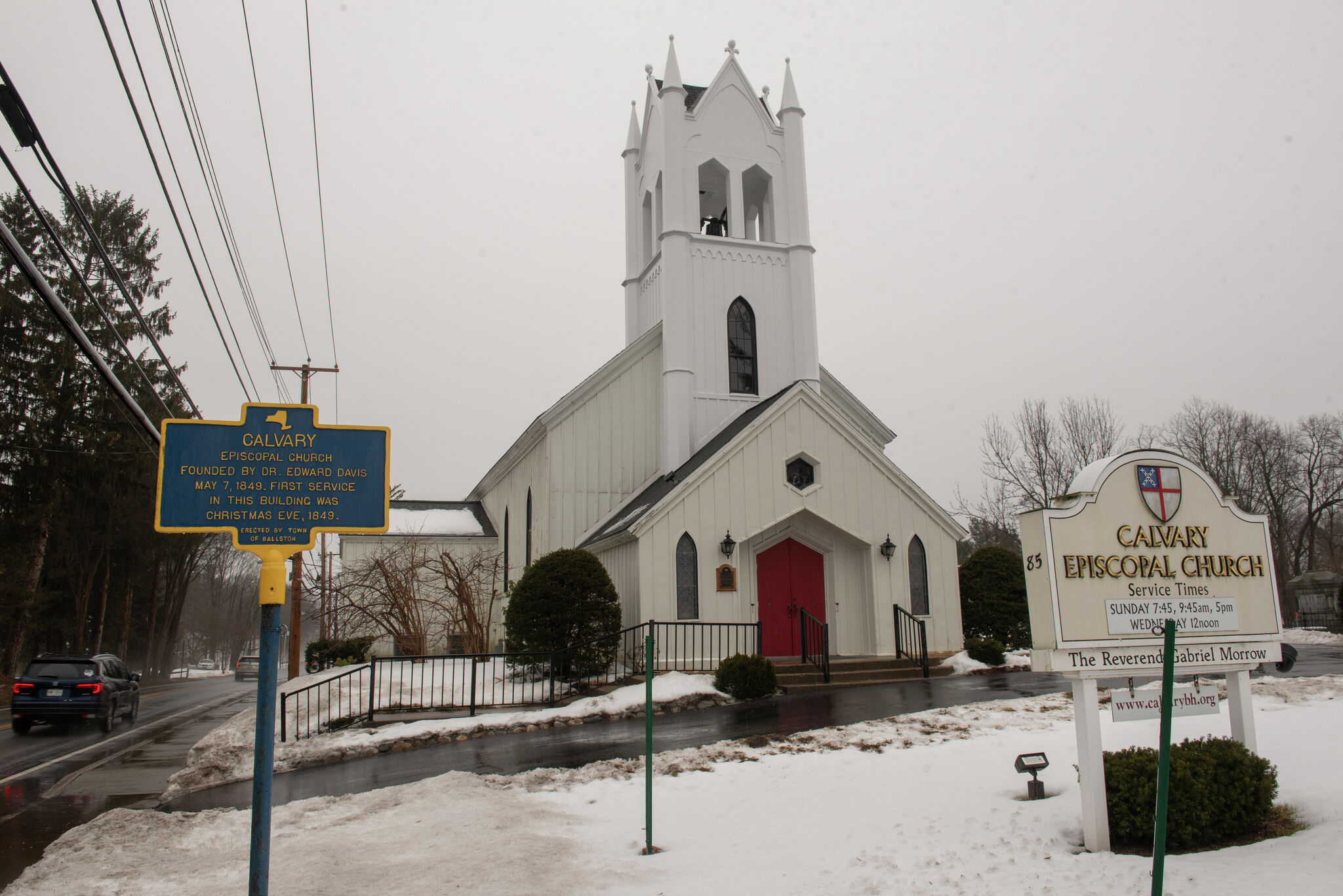 Above all, church bells ring with their community

BURNT HILLS — The ivory-white tower with its finely tuned bell was a source of pride for immigrants who founded Calvary Episcopal in 1849 after coming to work in the Burnt Hills mills.

Father Gabriel Morrow says Calvary Bell’s main note is E, which gives it a clear, sparkling sound – perfect music for celebrating a wedding, holiday or the end of the Civil War.

But that same bell could call the faithful to tears when a beloved member of the community – or a national leader like Abraham Lincoln – has passed away. When a devotee died more recently, Morrow pulled the brown rope to the 1,000-pound bell 97 times, a toll for every year of the man’s life.

Some churches have a computerized bell sound. The Burnt Hills tug of war is old school.

Morrow says the bell was serviced and tuned by the prestigious Meneely Foundries on the Hudson River. Meneely has bells on every continent except Antarctica. He fabricated and installed the four bells of the Metropolitan Life Insurance Tower in New York. Sydney Ross wrote in the book The Bell Casters of Troy: “These bells (Metropolitan Life) hang 700 feet in the air, by far the tallest in the world. Their noise has been reported by travelers at sea, beyond Sandy Hook, New Jersey, 28 miles from the tower, and by boats in the Hudson River, also as far north.

Carl Zimmerman, a retired Midwestern meteorologist who plays flute, piano, and carillon, is a bell enthusiast and an expert on the history of church bells (and those used in Buddhist temples). He helped the Meneely family create an online history of their business. Zimmerman says church bells were mostly made of bronze, and the amount of copper and tin they contain affects the sound.
“Copper bells ring and you can hear them across a farm field, but they don’t ring,” he said.

Zimmerman explains that a steeple was a church’s contribution to the entire town community. At a time when most workers could not afford watches, bells could ring the hours of work and rest and keep track of time.

“They rang to warn people of fires, approaching armies or enemy ships,” Zimmerman said. “In Europe, the ringer kept watch in the tower for dangers. He was often given an apartment in the bell tower.

European bell ringers were seen as crucial along with lighthouse keepers who also lived in their towers, on the lookout for danger.

Interestingly, Buddhist retreats have used bells to call devotees to meditation and worship since medieval times. But Zimmerman says he is unaware of any mosques or synagogues having steeples. Of course, mosques have minarets, tall, slender towers, where a human muezzin (or recording) can call worshipers to prayer.

Given anti-Semitic persecution during the Dark Ages, alerting a city to a Jewish worship service could have been dangerous for a synagogue.

Calvary was listed on the National Register of Historic Places in 2017. The church survived a fire in 1967, but more than a century of rain and wind have been hard on the steeple. Water flowed from it into the sanctuary during worship.
“We kept bowls and buckets around the benches to catch the drips,” Morrow recalled.

The Bell Tower Restoration Committee, chaired by longtime church member Paul Rasmussen, was able to raise funds and find the right contractors to completely restore the tower at 85 Lake Hill Road. Morrow says the wooden tower is now protected from rot with a waterproof material that looks like wood. Morrow praised Ezek Building Products, which produced the material, and Nally Restoration for the perfect results. It’s hard to imagine the leaky sanctuary, which is light and airy now.

“The two gentlemen who did all the building were Tim and Josh Kahler, a father and son, and they did a great job,” he said.
The total cost was $173,000, including fundraising costs. A Ballston Lake Fire Department truck christened the new tower with a spray of water from the hose.

Before the pandemic, Morrow estimates the church had about 120 members. Now he thinks the number could be closer to 110 members, with about half showing up for services in person and the rest on Zoom.

Now the congregation would like to improve the historic building adjacent to the church.

Zimmerman fell in love with the carillon (a tower with over 23 bells, each tuned to a different musical note) while attending a concert as a Trinity College student.

This is the first in a series of stories that examine the area’s historic bells and steeples. Today’s story is about a church that raised money to repair its 135-year-old steeple, then had it baptized by a fire truck.

The bell is repaired separately in a foundry on the Hudson River that was built in 1848. Each bell sound has four notes: a base note, a hum, and a note higher and lower than the base. If they are not tuned correctly, anyone with a good ear, such as a musician or singer, can hear the wrong note.

The bells in America rang for the dead, a toll for each year or victories. Some 18th and 19th century bells were mixed and cast so that the notes could carry 50 miles, although noise pollution regulations prohibit this today. It was a way to learn that the Americans had won a battle or a war so that the soldiers would not continue to fight and die until a messenger could ride a horse to the outskirts of the battlefield and deliver the news.

Meneely closed its Hudson River smelters in 1951 when copper and tin were desperately needed for the Korean War. But now the service bells provided to communities have been supplanted by sirens, text alerts and Ministry of Music public address systems. Zimmerman believes that the sound of bells adds richness to life. He mapped the location of steeples and chimes around the country and kindly shared a link to his map of New York and the Berkshires with the Times Union. If a road trip is doable, there’s plenty to hear in our area.

Christian or Mainstream Media: Which Do Evangelicals Prefer? | Baptist life

Fighting for the rights of workers in the informal sector