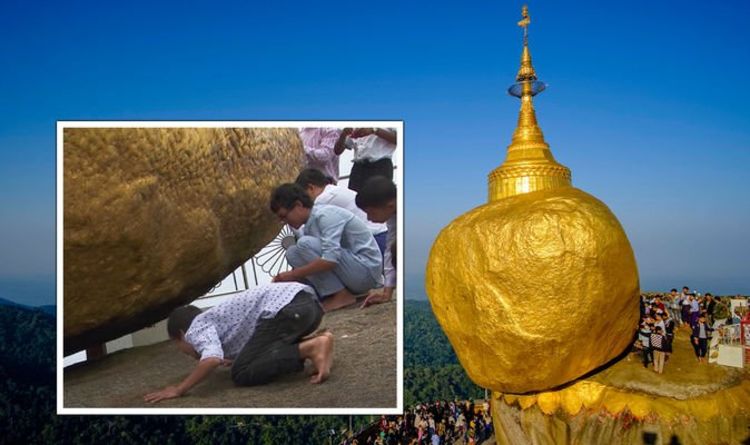 Kyaiktiyo Pagoda, also known as the Golden Rock, is a well-known Buddhist pilgrimage site in Mon State, Myanmar. It sits on top of Kyaiktiyo Hill (also known as Kelasa Hills or Eastern Yoma Mountains) and sits on the Paung-laung Ridge of the Eastern Yoma Mountains. Shrouded in clouds, its origins and history offer visitors and pilgrims a tantalizing taste of mystery and mythology.

The boulder itself is 25 feet, precariously poised on the edge of an abyss.

To the human eye it sounds baffling, almost impossible, but to the devoted it is proof of the divine.

Its worshipers believe that the rock remains in balance thanks to the miraculous powers of Buddha.

Between the rock and the hill it stands on, it is actually believed that a lock of the Buddha’s hair is placed, helping him to keep his balance.

Archeology: researchers have been amazed by the precarious balance of the rock for years (Image: GETTY / Youtube / Smithsonian Channel)

Ancient history: Artist’s impression of the rock in 1920 (Image: GETTY)

Few Burmese question the engineering behind the construction and instead devote themselves to the mythology of it.

The more myths and miracles a site is surrounded by, the more important it is to pray there.

Her story and story were explored during the Smithsonian Channel documentary, “Wonders of Burma: Shrines of Gold,” in which the narrator noted her “gravity-defying” nature.

They said, “It is a natural wonder made sacred by stories.”

The legend begins with a kingdom a thousand years ago at the bottom of a region called “Upper Mon”.

One day the king met a Buddhist hermit who held a lock of hair inside his so-called Buddha hat and offered it to the king.

In return, the hermit insisted that the hair be encased in a pagoda built on a rock in the shape of his head.

The king had inherited supernatural powers from his father Zawgyi, a skilled alchemist, and his mother, a dragon-serpent naga princess.

Route: A pilgrim on his way to the pagoda (Image: GETTY)

He enlisted the help of Sakra, the Thagyamin, who found the perfect rock at the bottom of the ocean.

Pulling it from the seabed, he used a boat to transport the boulder and eventually lifted it to the top of the mountain.

After balancing the rock on the mountain, the king built a pagoda at the top and encased the Buddhist’s hair inside.

The boat that was used to transport the rock was also turned into stone, also venerated by pilgrims at a place about 300 meters from the Golden Rock.

Mythology: The rock is shrouded in mystery and mythology (Image: GETTY)

It is known as Kyaukthanban or stupa pagoda – its literal meaning translates to “the stone boat”.

Another version of the story says that the rock was placed on the hair and the hair helps keep the rock from sliding down the mountain.

And, another states that Buddhist prides impressed the king with his asceticism and thus used his own powers to carry the rock himself to its present place.

At the edge of the abyss: Many legends claim to give the reason why the rock has not yet fallen (Image: Youtube channel / Smithsonian)

The shrine that followed and the history behind it made Mount Kyaiktiyo and the Golden Rock one of the most famous and popular places in the whole country.

While the Golden Rock has become a tourist attraction, between November and March an atmosphere of devotion is observed.

It is here that pilgrims come from all over Myanmar and sing, light candles, meditate and bring offerings to the Buddha.