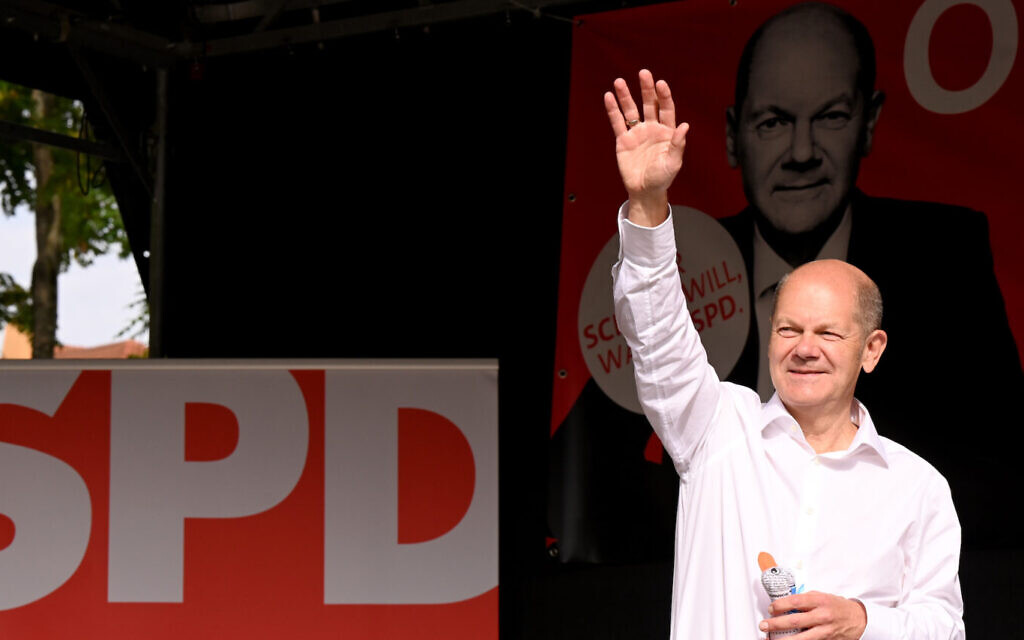 As Germany votes, here is the position of the main parties on Jewish issues

JTA – The pivotal national election in Germany takes place on Sunday, and one thing is certain: after 16 years in power, Chancellor Angela Merkel will no longer be in charge.

Who comes next? Experts predict a new three-party coalition of center-left and moderate parties – most likely the Social Democrats, led by current Vice-Chancellor Olaf Sholz; the left-wing Greens, led by Annalena Baerbock; and the center-right Free Democratic Party, led by Christian Lindner.

Alternatively, Merkel’s party – the center-right Christian Democratic Union, or CDU, now led by Armin Laschet – could be a second or third partner in a coalition.

Jews represent a tiny minority of the population – less than 200,000 in a country of 83 million people – and they do not vote as one.

“The Jewish vote in Germany is not big and not very important,” said Meron Mendel, director of the Frankfurt-based Anne Frank Education Center. “They are almost all migrants from the former Soviet Union [and] their greatest concerns are not especially “Jewish” but more so their situation [as newcomers] in Germany, ”said Mendel, who came to Germany from Israel in 2001.

By registering, you accept the conditions

While the Jewish vote is not courted in Germany as it is in the United States, politicians are taking note of the particular issues that preoccupy Jews, in part out of a duty to ensure that the Holocaust is not forgotten.

“There is no data on what interests Jewish voters as a group, no investigation,” said Dalia Grinfeld, deputy director of European affairs for the Berlin-based Anti-Defamation League. “Jews are part of society at large and… they vote on different issues,” from climate change to health policy, from the economy to refugees, said Grinfeld, who was born in Stuttgart.

In addition, Jewish leaders, whether religious or political, generally do not support parties. But observers are paying close attention to how the main Democratic parties scramble over major Jewish issues: anti-Semitism and its various sources, and Israel and other foreign policies.

With that in mind, in August, the German Jewish ValuesInitiative – a non-partisan NGO that provides information to policymakers and voters – sent a list of platform questions to all parties in the Bundestag, or parliament, to the exception of the extreme right. Alternative for Germany, or AfD.

In the process, the newspaper Die Welt approached the leaders of each party, drawing on questions from ValuesInitiative. They understood the AfD, but its representative did not respond.

In their responses, the traditional parties could hardly be seen with the naked eye. Almost all of them expressed support for Israel and the security of Jewish life in Germany, condemned anti-Semitism and spoke in favor of reinstating the nuclear disarmament agreement with Iran, as long as the country fulfills its obligations. obligations. Most want tighter controls on foreign funding for mosques in Germany. When it comes to defending Israel at the UN, most have said they will make decisions based on the fairness and impartiality of resolutions.

Laschet said that we “will clearly name and condemn the attacks on Israel”, while Lindner wants Germany “to clearly distance itself from unilateral initiatives and alliances, mainly politically motivated, of anti-Israel member states” in United Nations bodies. Green candidate Annalena Baerbock called the number of UN resolutions dealing with Israel “absurd compared to resolutions against other states.”

“What [the parties] writing is good, “commented Elio Adler, founder and director of ValuesInitiative,” but what matters is what they actually do.

And what they do is influenced by what they think voters want. This could cause problems for special relations between Germany and Israel, said Charlotte Knobloch, vice-president of the European Jewish Congress and the World Jewish Congress.

“The shift from a predominantly neutral stance towards more openly hostile views of Israel among the German public has become increasingly evident,” said Knobloch, who survived the Holocaust in hiding and became a leader. of the Jewish community in post-war Munich.

She fears that the gap between politicians and the electorate “will only widen after September 26”.

Some left-wing politicians avoid attacking anti-Israel movements and anti-Semitism within them, and far-right politicians falsely claim to be “a pro-Israel force and a bulwark of Jewish life,” he said. supported Knobloch. “We German Jews find ourselves between a rock and a hard place in this area. “

Merkel disagreed with former Israeli Prime Minister Benjamin Netanyahu on some issues, including increased settlement building, which she said puts her preferred two-state solution at risk. But she did not let these hamper a fruitful relationship with Israel. 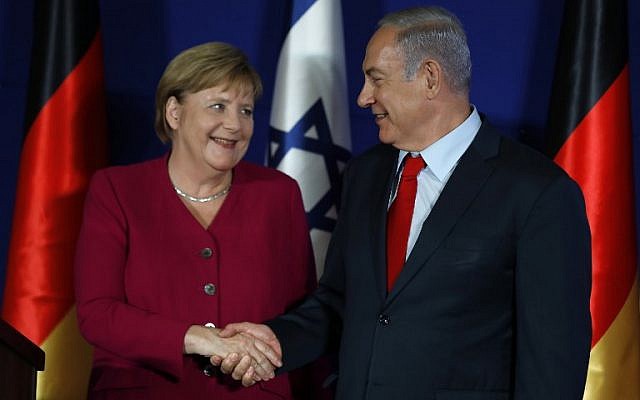 “Anti-Zionism is on the rise in all political parties,” German Jewish columnist Michael Wuliger told the Jewish Telegraph Agency in an email. “Angela Merkel is probably the last German politician whose commitment to Israel was a matter of the heart. “

Anti-Semitism at home is a major problem. A 2018 European Union survey showed that 74.8% of Jewish respondents in Germany felt their government was not doing enough to tackle the problem. A year later, a right-wing extremist attempted to force his way into the Halle synagogue on Yom Kippur 2019, killing two people in the street.

In 2020, the federal government pledged an additional $ 26 million to cover the costs of securing Jewish communities.

Baerbock told Die Welt that his party wanted to “promote Jewish life in its diversity in Germany and make it visible, in schools, in the whole of society.” She called for “a paradigm shift” to deal with threats to democratic values ​​and the dismantling of far-right networks. All Germans should “resolutely counter anti-Semitism and the spread of anti-Semitic conspiracy stories,” she said.

In his responses, Sholz stressed the importance of funding civil society organizations that fight right-wing extremism and anti-Semitism. He said immigrants to Germany – including children – must have access to integration and language classes “from day one”, to stem the radicalization of young Muslims who many see as a key problem in Germany and in other European countries. The SPD also plans to shut down extremist Islamist mosques and tackle hate propaganda online.

While Adler’s ValuesIniative “will not speak on individual parts; the only thing we have done is take a clear stance on the AfD. “

AfD party leaders have been accused of belittling the Holocaust and have recently found favor with coronavirus deniers. In 2017, Bjoern Hoecke, leader of the AfD in the former East German state of Thuringia, criticized the Holocaust memorial in Berlin, telling a group of young party supporters that “the Germans are the only ones in the world to plant a monument of shame in the heart of the capital. And in 2018, former AfD party leader Alexander Gauland (now representative in the Bundestag) said: “Hitler and the Nazis are just shit in over 1,000 years of Germany’s successful history. “. 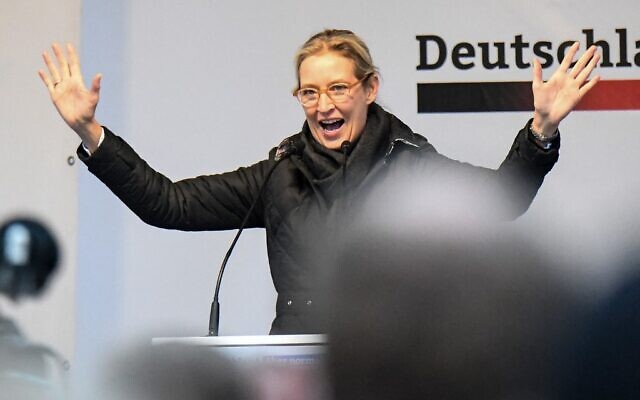 And now, “With the Covid pandemic, [the AfD] unfortunately found a new topic after the refugee crisis, ”said Josef Schuster, head of the Central Council, in an email to JTA. He “has made the good graces of the deniers of the coronavirus and the opponents of the vaccination in order to fish for votes there”. Schuster recently sounded the alarm about Germans protesting coronavirus public safety measures that compare to Anne Frank or other Jews persecuted by wearing yellow stars imposed by Nazi Germany.

On September 9, 60 Jewish groups joined a public appeal led by the Central Council of Jews in Germany, calling on citizens to “vote for a clearly democratic party and help expel the AfD from the Bundestag.” Other signatories included the World Jewish Congress and the European Jewish Congress, the Conference on Jewish Material Claims against Germany, the Berlin office of the American Jewish Committee, the Orthodox and Liberal Rabbinical Conferences and Schools of Germany, the trade unions. Jewish students and a wide range of religious organizations. , political and educational groups.

On the same day, the Anne Frank Education Center made a similar appeal, reminding voters that if the AfD wins a second term in the Bundestag, it will become eligible for tens of millions of euros from taxpayers for its educational foundation.

It would be worse than ironic, said Mendel, director of the Anne Frank Center, “when we try to educate about tolerance, democracy and diversity, and then the government would give millions of euros to a foundation that tries to do the exact opposite. “

Polls suggest the AfD is likely to lose votes this time around. But a party only needs 5% of the vote to get a seat in the Bundestag. In the last federal election, they won 12.6%.

“Of course, Jewish citizens are… interested in topics related to Jewish life,” Adler said. But they are also “normal citizens who also have other questions to which the parties must find answers.

“We are not only an indicator of the state of democracy, we are also a starting point for solutions.”

God rejoices for you … | Chroniclers