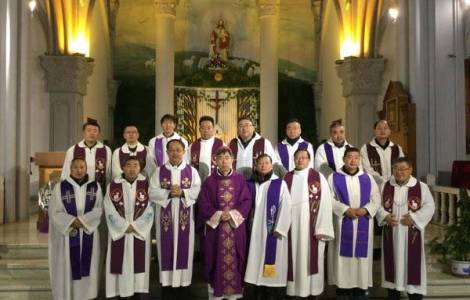 Beijing (Agenzia Fides) – Eliminate the evils of the world with which priests have contaminated themselves within society and return to the flock to exhale the scent of the shepherd: these are the recommendations made by Mgr Joseph Shen Bin, bishop of the diocese of Haimen (Nantong ), in Jiangsu Province, mainland China, speaking to his priests during the spiritual retreat for Christmas. During the four days of intense spiritual retreat, from December 14 to 17, the diocesan priests reflected and meditated on the priestly vocation, each from their own experience. They then approached the theme of their relationship with God, with the community, with the faithful, with the Bishop and with their confreres. In addition, they were also faced with the excessive search for money, power, physical well-being of some priests. All the themes were the subject of discernment, in the awareness of their own priestly vocation. The retreat was a spiritual renewal for all, according to the testimonies of the participants, who now feel ready to leave with the strength received from these intense days of meeting with the Lord, with the priestly brothers and with their bishop, Monsignor Shen. Trash can.
The diocese of Haimen (Nantong) is located in the eastern part of Jiangsu province. It recently celebrated the 95th anniversary of its foundation and also the 95th anniversary of the consecration of its first bishop, Mgr Simon Zhu Kaimin, who was one of the first 6 bishops of Chinese origin consecrated by Pope Pius XI to St. Pierre, October 28, 1926, fruit of the intense pastoral work of Bishop Celso Costantini, the first apostolic delegate in China. During his 30 years of episcopal ministry, Bishop Simon Zhu built 156 churches (almost one for each village and district), as well as a hospital, a school, a home for the elderly, an orphanage and many other social services. , such as evangelism tools. In July 1931, he also founded the congregation of the Sisters of Saint Thérèse of the Child Jesus, which today has about thirty nuns active in the parishes, in the health and social fields. He has been defined as “the apostle of Jesus, pillar of the Church”. Currently this ecclesiastical district has more than 30,000 faithful, divided into 24 parishes, with 15 priests and around 20 religious. Even today, the diocese of Haimen is one of the most active communities in the field of pastoral care and evangelization. (NZ) (Agenzia Fides, 12/22/2021)

Indian democracy: a threat to its religious minorities