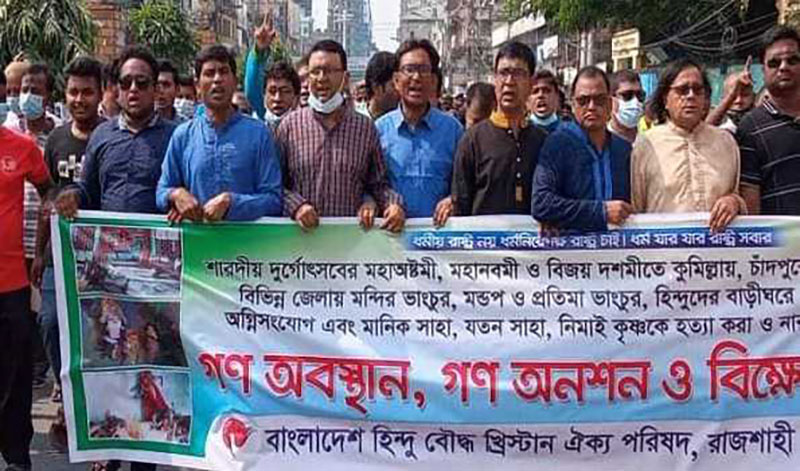 They also threatened to continue their protests until trial.

On October 21, Bangladesh police identified the person who allegedly put the Holy Quran in a mandap in the town of Cumilla during the Durga Puja, which led to community unrest in several locations in Bangladesh last week.

Based on the analysis of the CCTV footage, police identified Iqbal Hossain (30) resident of Cumilla as the person who committed the act. Police have yet to arrest the culprit.

CCTV footage shows a man carrying the holy book heading for the temple after midnight and returning with Lord Hanuman’s mace in his hand after some time. Although the mandap’s CCTV camera was not working, the images were taken from the CCTV camera of a neighboring residence.

A photo of the book kept in Lord Hanuman’s lap was shared on social media and went viral.

Afterwards, mobs attacked the temples, homes and business establishments of the Hindu minority community in Cumilla. Similar incidents were reported in Noakhali, Rangpur and several other places in Bangladesh over the next few days between October 13-16.

It was suspected that the act of desecration was a premeditated act aimed at disturbing peace and social harmony in Bangladesh.

Police filed 72 cases relating to incidents of temple vandalism and attacks on Hindu homes and businesses after the October 13 incident.

More than 450 people have been arrested so far, including the person who first posted the controversial image of Mandap Durga to Cumilla on social media.