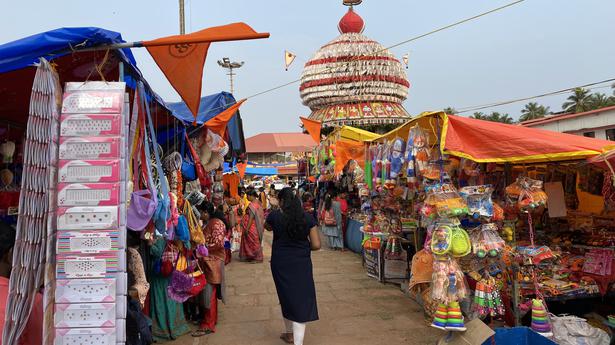 While small traders have been affected, the government. justified the request of the Hindutva groups by invoking a 2002 rule

While small traders have been affected, the government. justified the request of the Hindutva groups by invoking a 2002 rule

The dry months preceding the monsoons mark the season for temple fairs and chariot festivals in Karnataka, attracting huge crowds that provide an opportunity for small traders, overriding castes and communities. However, this year Hindutva groups have given a communal flavor to the festivities by forcing local government and temple committees to ban Muslim traders from setting up stalls at these events.

During the Kote Marikamba Jatre in Shivamogga, South Karnataka, which started on March 22, leaders of the Vishwa Hindu Parishat (VHP) and Bajrang Dal successfully prevented Muslims from opening shops. Every year, a number of Muslims not only engaged in petty trade, but also offered Harake (fulfillment of a vow) to the deity. This year, Hindutva leaders reportedly threatened the person who won the tender to run the stalls, demanding that Muslims not be allowed to set up stalls. Considering the coercion, the person finally gave up the bidding and the organizing committee of the festival gave the responsibility to the VHP and Bajrang Dal leaders themselves.

In the same vein, the management committee of the Hosa Marigudi temple in Kaup, Udupi district, also did not allow Muslim traders to set up stalls during the annual “Suggi Mari Pooje” of March 22.

According to Ramesh Hegde, chairman of the committee, Hindutva organizations had appealed to the committee against allowing Muslims to participate in the auction of stalls allegedly to ‘counter’ the movement of Muslim traders who closed their doors to protest against the Karnataka High Court verdict on hijabs. in schools. The committee later made a decision on the ban “to prevent any public order issues”, he said.

Members of Hindutwa groups have raised similar claims in several other places in Karnataka. The government did not intervene to stop this trend, but cited rules drawn up in 2002 to justify the request. Speaking before the Assembly, the Minister for Law and Parliamentary Affairs, JC Madhuswamy, cited Rule 31(12) of the Karnataka Hindu Religious Institutions and Charitable Foundations Rules 2002, which prohibits non-Hindus to participate in the auction of stalls during jackets.

Indeed, the demand from Hindutva groups is not entirely new, at least in coastal Karnataka. The Mahalingeshwara Temple of Puttur in Dakshina Kannada has only allowed Hindus to set up their stalls at its annual fair since 2014, citing the same rules. This temple made headlines in 2016 due to a controversy over its management committee printing the name of then Dakshina Kannada Deputy Commissioner AB Ibrahim on the invitation card to the annual jatra . After a public interest litigation petition was filed in the Karnataka High Court for questioning, the court ordered the government to reprint the map, omitting his name. The government admitted that printing the DC’s name was against the Karnataka Hindu Religious Institutions and Charitable Endowment Act, 1974.

As demand for Muslim traders to be banned from temple fairs spreads, what is at stake is not just community harmony, but also the businesses and livelihoods of small traders.

A Harish juice maker (name changed) who set up his stand in the annual meeting jatra in Kaup for several years said the fair had not been held for two years due to COVID-19 restrictions and the response this year has been poor. “Previously, more than 400 stalls went up to the fair. This year it has been reduced to around 150-200,” he said.

Official bans aside, the threat of violence is all too real. The VHP’s Mangaluru Divisional Secretary, Sharan Pumpwell, publicly stated at a press conference in Mangaluru on March 23 that if non-Hindus were found trading near the temples, the VHP and the militants of Bajrang Dal would not hesitate to take the law. in their hands.

Dugganna Sawant, Hereditary Administrator of Bappanadu Durgaparameshwari Temple in Mulky, Dakshina Kannada, said the temple has allowed nearly 50 Muslim traders to set up their stalls in the temple area during the ongoing annual fair. But traders had not settled, fearing violence.

Escalating their demands, Hindutwa leaders like Pramod Mutalik, founder of Sri Ram Sene, called on the government to evacuate Muslim vendors from all temples. This has left many traders seriously worried. Sheikh Suban, whose family runs a shop selling fruits and pooja materials at the Saundatti Yallamma temple in Belagavi district, asked: “What will we do if we are driven out of the shops tomorrow? My brother and I have two stores here. They were created 50 years ago by my grandfather.

Meanwhile, the Indian Association of Lawyers for Justice (AILAJ) has questioned the constitutionality of the cited rule to enforce these bans. “The said rules are delegated under the Karnataka Hindu Religious Institutions and Charitable Endowments Act 1997, which deals with immovable property owned by, or donated or endowed to the institution. It cannot therefore be said at all that it governs the public property by which jatras where the processions pass,” AILAJ said in a statement.

Furthermore, he said that the Supreme Court suspended in 2020 a similar provision in the Andhra Pradesh Charitable and Hindu Institutions Leases and Licenses Rules 2003 and Endowments of Immovable and Other Entitlements (other than agricultural land), prohibiting non-Hindus from participating in bidding process with shop auction or otherwise to obtain a lease or license to conduct business in temple-owned immovable property.

(With contributions from Mangaluru, Hassan and Belagavi)