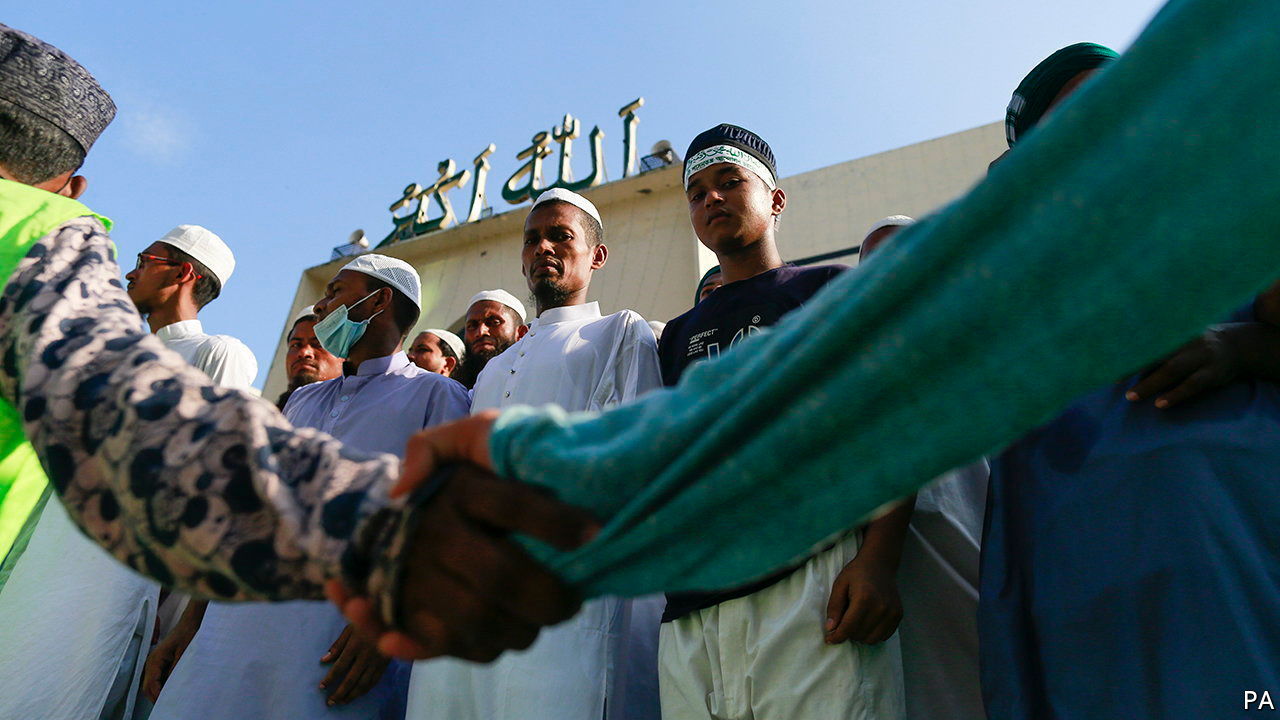 Bangladesh’s religious minorities are under attack

ONE DAY in october, Dilip Das took a bath, put on a new shirt donated by his son and prepared a flower garland before leaving for his local temple in Cumilla, a town of 300,000 people in eastern Bangladesh. It was Durga Puja, the most important holiday in the Bengali Hindu calendar. At the end of the day, Mr. Das, 62, was dead, clubbed by a Muslim crowd. “What was his sin? »Asks Rupa Das, his wife. “He was just a simple man, a launderer,” who had lived happily alongside his Muslim neighbors.

Mr Das was the victim of widespread unrest that day in Bangladesh, which is 90% Muslim. A copy of the Koran had been found in one of the temporary temples erected for the festival in Cumilla. A video showing a policeman carrying the Islamic holy book, with a voiceover claiming he had been rescued from the feet of a Hindu idol, quickly went viral on Facebook and WhatsApp, sparking a wave of attacks on Hindus and d other religious minorities. , too much. Outside the main mosque in Dhaka, the capital, a crowd of 10,000 chanted “Hang the culprits”. In much of the country, Muslim rioters beat Hindus and looted their property. Hundreds of people were injured and at least three died, along with four Muslim protesters shot dead by police.

Islam is the state religion in Bangladesh. Confusingly, the constitution also says the state is secular. (Past struggles over this topic have ended in self-contradictory confusion.) The ruling Awami League party is secular, but the rise of Islamic conservatism has made religious minorities feel insecure, says Mubashar Hasan. from Western Sydney University. The Awami League also wooed Puritan voters and flirted with Islamist groups during its 12 years in power. And he has often failed to prosecute those responsible for the attacks, says Rana Dasgupta of the Bangladesh Hindu-Buddhist-Christian Unity Parishad, a rights group. Members of the student wing of the party have been implicated in the recent riots.

Yet in response to the violence, Sheikh Hasina Wajed, the Prime Minister, suggested that it was India’s treatment of Muslims that was causing the anger towards Hindus in Bangladesh. On October 14, she issued a warning to Narendra Modi, her Indian counterpart, and his supporters: “They should be aware that such incidents should not take place there which would impact Bangladesh.

Sheikh Hasina is not entirely a hypocrite. Bangladesh is indeed affected by regional currents, explains Dr Hasan, especially those from India. In 2019, Mr Modi’s Hindu nationalist government put in place new rules granting an easier path to citizenship for refugees from neighboring countries, unless they are Muslims. He also targeted Muslims in neighboring states of Bangladesh, whom politicians from the ruling Bharatiya Janata party called “infiltrators” and “migrant termites”. In recent weeks, hundreds of people have been displaced as part of eviction campaigns. Huge protests greeted Mr. Modi during his visit to Dhaka in March. Anti-Indian sentiments often slide into anti-Hindu hostility, says Dr Hasan.

The events in India have already sparked violence in Bangladesh. The country’s Hindus were targeted in 1992 after religious fanatics demolished a mosque in India. This time, however, the bloodshed in Bangladesh sparked further violence in India. Days after the unrest in Cumilla ended, crowds ransacked mosques and Muslim homes in Tripura, an Indian state a few kilometers from the city. India’s National Human Rights Commission has called on local police to respond to allegations that “the state apparatus acted as a spectator”.

In Bangladesh, on the other hand, the government has arrested 583 people since Mr. Das was killed, and Sheikh Hasina has pledged to defend religious freedom. M. Modi, notes Meenakshi Ganguly of Human Rights Watch, a NGO, is silent on the mistreatment of Muslims in India. Majority elsewhere in the region, however, sets the bar low. Ultimately, she says, states must protect their own religious minorities. ■