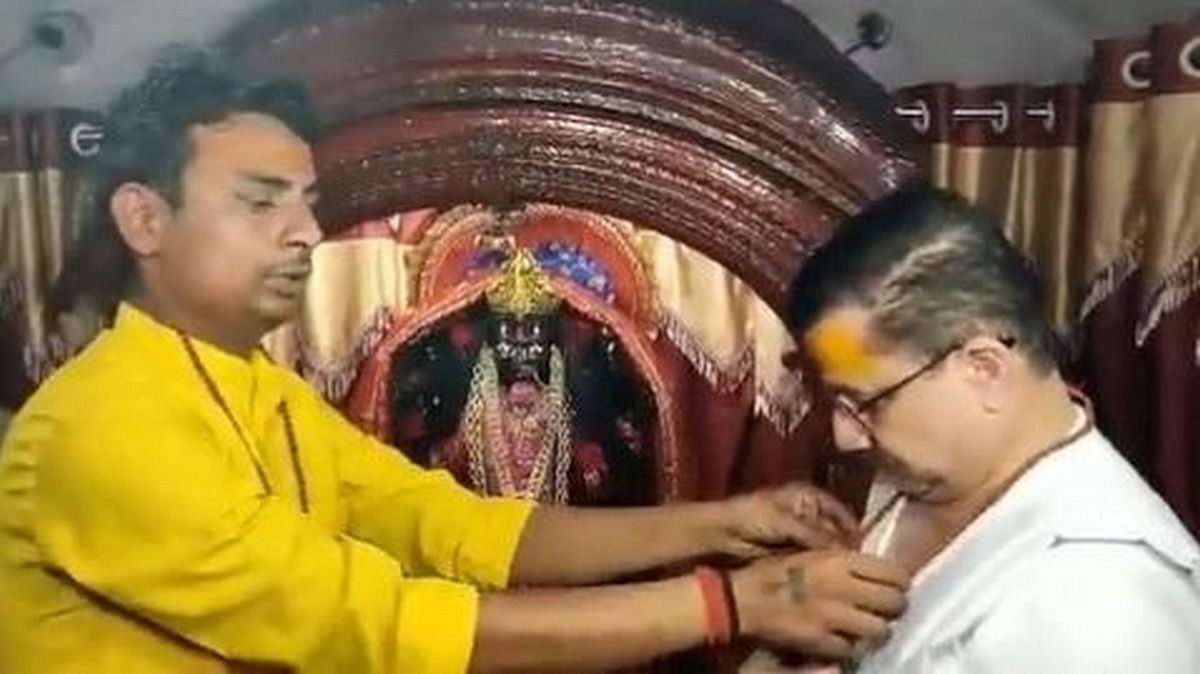 Becoming a Hindu is not that easy. Even if a Waseem Rizvi turns into Jitendra Tyagi


FThe decision of Syed Waseem Rizvi, former chairman of the Shiite Waqf Central Council of Uttar Pradesh, to convert to Hinduism is legally acceptable. He has this right under the Basic Rights Chapter of the Indian Constitution. Teaching a religion, converting, or even not professing any religion is a normative idea in most democratic countries.

But Rizvi’s conversion posed a problem for the Hindu religion. Becoming a Hindu cannot be as easy as someone converting to Islam, Christianity, Sikhism or Judaism. A Hindu must have a caste. ‘Casteless Hindu’ is an oxymoron, an impossibility. Rizvi’s problem was solved by Yati Narsimhanada Saraswati, who officiated the conversion of the first to the Dasna Devi temple in Ghaziabad by renaming it Jitendra Narayan Singh Tyagi. And so, the former leader of the Samajwadi party obtained his caste, a home to live under the largest tent in Hinduism. What a relief. He has an address. Where does he have?

Although Waseem Rizvi is a Syed, the highest rank in the Indian Muslim hierarchy, he was inducted into a relatively low Tyagi caste. A high ranking Muslim should become a Brahmin. Otherwise, why will they convert? After all, it will be a downgrade for them in the social hierarchy.

This is also one of the reasons why Muslims will never convert in large numbers to Hinduism. A Sikh Jat or a Christian Syrian, who are respectively the highest placed in the Sikh and Christian hierarchies, will not accept subjugation by Brahmins and Thakurs.

For the Rashtriya Swayamsevak Sangh (RSS) to succeed in its ghar wapsi campaign, the conversion of superiors is very important. Those who occupy the first rank in the social hierarchy also play the role of opinion leaders among the followers of this religion. If the high ranking people of a religious order refuse to convert to Hinduism, then the middle and lower castes among them will also hesitate.

Read also : A state inquiry is not a solution to the lack of political will for a national caste census

1. Why was a Syed not inducted into the Brahmin caste after accepting Hinduism? The problem is that a foreigner becoming a Brahmin is simply not possible. The Brahmins were born, the becoming was not possible. Rizvi was adjusted into the Tyagi caste. Tyagis or Tagas consider themselves to be very similar to the Brahmins, but the Brahmins have different ideas about the former. The two castes do not marry. Tyagis’ position in the caste hierarchy is almost that of the Bhumihars.

2. The second reason is more complex. Yati himself is a Tyagi and was previously known as Deepak Tyagi. He included Rizvi in â€‹â€‹his own caste. But we don’t know, at this point, whether the Tyagis will accept Rizvi (now Jitendra Narayan Singh Tyagi) into their fold. We can only guess if the Tyagis will consider marriage alliances with the family members of Jitendra Narayan Singh Tyagi. If this does not happen, his position will become untenable. in the Tyagi caste. The possibility that he would be accepted into the Tyagi caste may become greater if the community accepted Rizvi’s ancestors as Tyagis. and its conversion into a kind of ghar wapsi (back home).

3. The third problem concerns the right of Narayan Singh Tyagi to have upanayana sanskara (the religious practice of wearing the sacred thread called janeu Where poonal). In Sanatana Dharma Shastra, those who have the right to wear the sacred thread are called Dwijas or the Twice Born. Historically and traditionally, the Tyagis have the hereditary right to wear the thread. But will a neo-convert be allowed to practice?

Read also : The Adivasis are not Hindus. The lazy colonial census gave them the label

Becoming a Hindu can be complex

BR Ambedkar wrote and explained this problem in detail in his thesis Who were the Shudras: â€œThe real criterion is not the wearing of the sacred thread but the right to wear the sacred thread. Understood in its proper sense, we can say without fear of being contradicted that the right to the Upanayana is the true and the only criterion for judging the status of a personâ€¦ â€According to religious texts, only the Brahmins have the power to accomplish the upanayana ceremony. Will they run the upanayana sanskara for a neo-converted Tyagi? If they refuse to perform the sanskara, then that will make Jitendra Narayan Singh a Shudra or even a Pancham (formerly “untouchable”).

Becoming a Hindu can be a complex and tedious exercise.

Despite all the pain of conversion, if neo-converts are placed at the bottom of the social order, it will only dissuade them from choosing Hinduism.

It is a fact that caste is a South Asian problem and no religion can claim that its followers do not practice caste in one form or another. But the difference is that among the Hindus, the caste has a religious sanction while the caste among the non-Hindus is without religious consecration. This makes the practice of caste among Hindus rigid and thus prevents them from welcoming others into their fold.

Ambedkar argues that caste prevents Hindus from being a missionary religion. He maintains that caste is incompatible with conversion. â€œThe problem is where to place the convert, in what caste? This is a problem that arises in connection with the conversion. This is a problem that should baffle any Hindu wishing to convert aliens to their religion.

This is the reason why despite all the efforts of Arya Samajis and the RSS volunteers, the idea of shuddhi and the project of shuddhikaran remains a non-starter. Shuddhikaran only worked in the case of mainland tribals because they do not practice caste as a hierarchical system in their social life. Thus, it is easier for a Christian tribal to convert to Hinduism because in a new religious avatar, his social status is not defined by any caste identity. The tribes were never part of the Hindu order. They weren’t even outcasts or pancham varna. This means that they don’t have the Hindu problem of locating caste when converting.

If RSS really wants to make India a pure Hindu Rashtra, it must undertake the large-scale project. shuddhikaran, and annihilate the caste among the Hindus. To do this, the RSS will have to denounce religious texts, Shrutis, Smritis, even Vedas and Bhagavad Gita because these texts sanction the caste system. It is not an easy task. Until then, Muslim and Christian religious leaders should not fear that people are doing ghar wapsi to Hinduism in large numbers.

The reasons are obvious. Like R. Jagannathan of Swarajya said, Hindu society as a whole does not know how to accept new converts into their faith. It asks a relevant question: why has Hindu society failed to win back even Hindus who converted out of fear and coercion? He concludes by saying, â€œThe only way the Hindu demographics can be maintained or expanded in India is to make Hinduism a missionary faith, but that means creating an ecosystem to support such missionary activities. Islam and Christianity are leagues ahead of the Hindus in this race. But if we don’t start building this ecosystem now, the two Abrahamic religions will gain at our expense. Hinduism will shrivel and wither in its native land.

Jagannathan calls for a fundamental purge of Hinduism. To become a religion of proselytism, Hinduism must first destroy the caste. It is still a difficult task.

Another problem is that without structures like castes, birth-based inequality and hierarchy, and ideas like karma philosophy and rebirth to support these structures, what will remain of Hinduism? Can it even be called Hinduism?

It’s a real catch-22 situation. Until this is resolved, Rizvi becoming a Tyagi remains a rare matter.

The author is the former editor of India Today Hindi magazine and has written books on media and sociology. He tweets @Profdilipmandal. Opinions are personal.

ThePrint employs the best young reporters, columnists and editors. To maintain journalism of this quality, it takes smart, thoughtful people like you to pay the price. Whether you live in India or abroad, you can do it here.