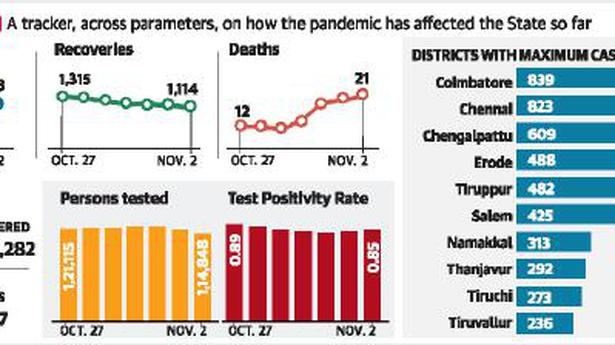 Of the 12 districts that recorded single-digit cases, Tenkasi saw two and Ariyalur, Ramanathapuram and Virudhunagar recorded three each. Tamil Nadu’s tally stood at 27,04586.

Twenty-one other people succumbed to the infection, bringing the toll to 36,157. All had co-morbidities. Chennai recorded five deaths, while there were two deaths each in Chengalpattu, Namakkal and Thanjavur. Twenty-four districts reported no deaths.

Among those who died was a 32-year-old woman from Karur. A person living with HIV / AIDS, she had peri-ampullary carcinoma. She tested positive on October 29. She was admitted to the Rajiv Gandhi government general hospital on October 31 and died the same day from COVID-19 pneumonia.

Launching an initiative to immunize people at their homes through mobile camps in villages in Chengalpattu district, Health Minister Ma. Subramanian said the eighth mega immunization camp would take place on Saturday and 50,000 camps would be held. put in place. While 13 lakh people are due to receive the second dose of Covaxin, 48 lakh are expected to take the second dose of Covishield, he said, according to a statement.

Noting that efforts were underway to achieve 100% delivery of the first dose by the end of November, he said that in the seven mega vaccination camps held so far, 1,513,382 people had been vaccinated.

The home vaccination will be carried out during the eighth mega-camp, he said. The program to reach village residents through mobile camps has been launched in the panchayats of Sarvampakkam, Nallamoor, Keezhkarunai, Kaatudevanur and Vilankanur in Chengalpattu district.

Gold island found in Indonesia, gold jewelry and rings coming out of the river