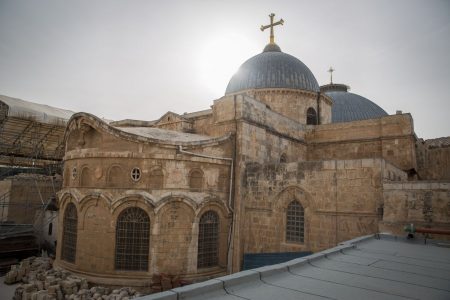 Palestinian Christians who are members of the Eastern Orthodox tradition are waiting for the Israeli High Court to decide whether they will be allowed to practice their freedom of worship for Easter. The petition was submitted by Orthodox institutions and figures in Jerusalem after Israeli authorities imposed restrictions and reduced the number of Christians they would allow to participate in “Saturday of Light” celebrations at the Church of St. -Sepulcher in Jerusalem.

This church is located where Christians believe Jesus ascended to heaven and is an extremely holy place for Christians of all faiths.

While Western Christian churches celebrated Easter last week, the Eastern Orthodox branch of Christianity is preparing to celebrate the feast this Sunday, April 24.

In a statement, the Arab Orthodox Institutions of Jerusalem, represented by lawyers Elias Khoury and Shady Samar, said: “Orthodox figures and institutions have filed a petition with the Supreme Court against the police decision to restrict access of Christians at the Church of the Holy Sepulcher and to reduce the number of people who celebrate Holy Saturday on the eve of Easter Sunday, in violation of the most basic human rights, freedom of worship and international pacts.

“The plaintiffs refused to compromise on the rights of Christians to practice their religious and traditional rites and free access to places of worship without barriers or permits, and a settlement proposal was rejected so as not to prevent entry into the old city ​​through the barriers and to allow only four thousand people to access the Church of the Holy Sepulcher and its surroundings, giving the police the right to close the checkpoints if they wish.

The call came after the Israeli government announced it would impose restrictions on the number of admissions to the Church of the Holy Sepulcher in occupied Jerusalem on Holy Saturday, which falls at the end of this week and precedes the Easter Sunday, according to the Eastern calendar.

The Arab Appeals Committee noted that “The Church of the Holy Sepulcher witnesses severe restrictions on the number of worshipers each year, during the Easter holiday, but this year Israel has tightened the restrictions even more, depriving Thousands access to the Church of the Holy Sepulchre.These restrictions go hand in hand with restrictions imposed by Israel on entry to the Old City of occupied Jerusalem and access to the holy Al-Aqsa Mosque , confirming that Israel is targeting all of occupied Jerusalem with its Palestinian national and religious identity.

Israeli soldiers and settlers have attacked praying Palestinian Christians and Muslims numerous times over the past week – which marks a special holiday on the Christian (Easter), Muslim (Ramadan) and Jewish (Passover) calendars.

Soul Experience with Rabbi Bortz Frees Us From Our Personal Egypt