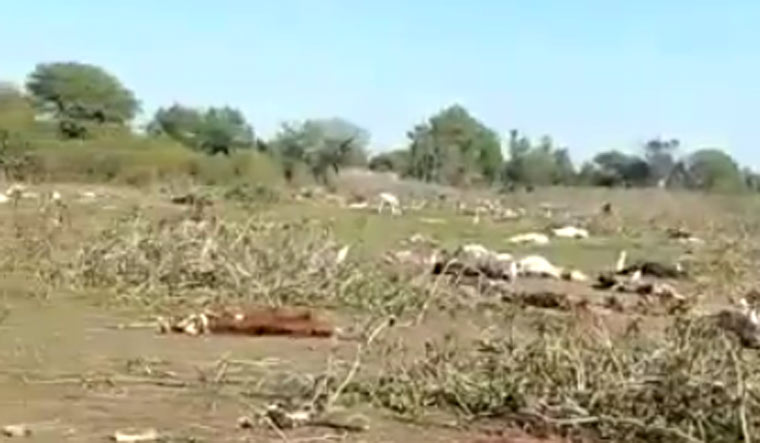 The Opposition Congress has launched an attack on the BJP government in Madhya Pradesh after the death of more than 100 cows at a government-funded private cow shelter on the outskirts of the capital Bhopal was revealed on Sunday. The state government has ordered a full investigation into the incident.

Congressman leader Kamal Nath posed a series of questions to the government on the monitoring of cow shelters, especially those that receive government subsidies and asked them to ensure that such incidents do not happen again. . Digvijaya Singh, a member of Rajya Sabha, accused the BJP-RSS and Chief Minister Shivraj Singh Chouhan of trying to shield the management of the cow shelter as the owner is a BJP leader.

Meanwhile, the women’s wing of Congress assembled a five-member team to visit the shelter and find out the real situation there.

On Sunday, carcasses of several cows were found in a well and scattered in an open field near the cow shelter run by Nirmala Devi Shandilya, believed to be a BJP leader. An FIR was registered against Shandilya on Sunday after district collector Avinash Lavania and district administration officials visited the scene, following protests from residents. The cow shelter has also been accused of encroaching on a large swath of government land.

On Monday, Home Minister Narottam Mishra said autopsies had been carried out on nine of the dead cows and six had been found to have died of old age, two of pneumonia and one of liver disease. He said an FIR has been registered against the owner of the private shelter and the government has taken over its management and arranged for fodder, water and medical aid. Healthy cows should also be moved to other shelters. The encroachment on the land is being removed, the interior minister said, adding that a full investigation had been ordered into the incident.

In a statement, Kamal Nath said such unfortunate and painful incidents of dead cows in shelters came from several districts and hurt religious feelings. The government remains a silent witness to the tragedy and takes no preventive measures.

“The government should clarify the number of cow shelters in each district, the organizations that run them, the number of progeny cattle in these shelters, the annual subsidy to these shelters, the provisions for health checks, regular maintenance, fodder and water and who are responsible for ensuring these provisions. I demand that the government investigate the use of subsidies by shelters and organize regular monitoring to ensure that no cows are starving,” said Nath.

Digvijaya Singh posted a series of tweets on Sunday and Monday attacking the government. He asked the government to verify whether the management of the Berasia Cow Sanctuary was involved in the illegal trade in skins and bones and also in the use of subsidies granted by the government. He also demanded that a case of cow slaughter be registered against the shelter’s management committee.

Singh also said that the so-called protectors of the Hindu religion only engage in politics under the guise of religion. “They have nothing to do with the Hindu religion or with the protection of cows. They only want to make money by abusing religion,” he tweeted, adding that the RSS, BJP and “mamu-gang” (a reference to Chief Minister Chouhan’s team) try to protect Shandilya and the management committee (of the refuge).

Your concise art guide to New York for February 2022