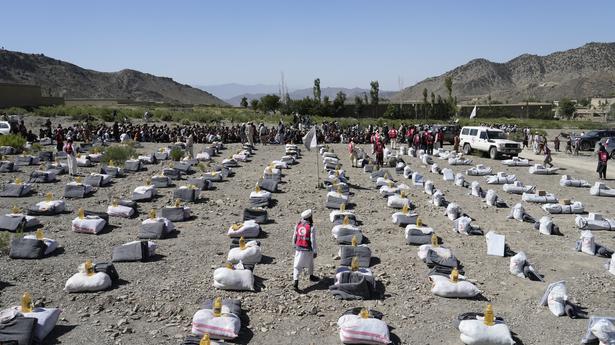 Mansoor Ahmad Khan, Pakistan’s ambassador to Kabul, the Afghan capital, said relief items sent by Pakistan on June 25 had been handed over to Taliban officials.

Mansoor Ahmad Khan, Pakistan’s ambassador to Kabul, the Afghan capital, said relief items sent by Pakistan on June 25 had been handed over to Taliban officials.

Thousands of people have been left homeless or injured by this week’s powerful earthquake in eastern Afghanistan, which state media said killed 1,150 people. An aftershock on June 24 claimed the lives of five other people.

Among the dead from Wednesday’s magnitude 6 quake were 121 children and the figure is expected to climb, the UN children’s agency representative in Afghanistan said. He said nearly 70 children were injured.

Survivor Dawlat Khan from Gayan district in Paktika province said five members of his family were injured and his house was destroyed by the earthquake.

“We are facing many problems. We need all kinds of support, and we are asking the international community and Afghans who can help us to come forward and help us,” he said.

Mansoor Ahmad Khan, Pakistan’s ambassador to Kabul, the Afghan capital, said relief items sent by Pakistan on June 25 had been handed over to Taliban officials. “It was our duty to help our Afghan brothers in these difficult times,” he said.

Neighboring Pakistan has often been blamed for harboring Afghan Taliban fighters before they seized power last August as America ended its 20-year war. Since taking power, Islamabad has led the way in urging the world to engage with Afghanistan’s faith-based government.

Earlier, the Pakistani government and a Pakistani charity sent 13 trucks carrying food, tents, life-saving medicines and other essential items to Afghanistan. A 19-member Pakistani team of doctors and paramedics is assisting the Taliban-led Afghan government in Khost, providing medical care to people injured in Wednesday’s earthquake.

The tremor struck an isolated and deeply impoverished region of small towns and villages nestled in steep mountains near the Pakistani border, collapsing stone and mud-brick houses and in some cases killing entire families. Nearly 3,000 homes were destroyed or badly damaged in Paktika and Khost provinces, state media reported.

Officials said on June 25 that Pakistan had opened its border in the northwest to transport seriously injured Afghans to Pakistani hospitals. But it is unclear how many Afghans have arrived in northwest Pakistan from quake-affected areas to receive medical treatment.

Overstretched aid agencies said the disaster underscored the need for the international community to rethink its financial cutoff from Afghanistan since Taliban insurgents seized the country 10 months ago. This policy, stopping billions in development aid and freezing vital reserves, has helped push the economy to collapse and plunge Afghanistan deeper into humanitarian crises and near-starvation. The effort to help the victims has been hampered both by geography and by the decimated condition of Afghanistan.

The rutted roads through the mountains, already slow to roll, were made worse by the damage caused by the earthquake and the rain. The International Red Cross has five hospitals in the area, but road damage has made it difficult for people in the worst affected areas to reach them, said Lucien Christen, ICRC spokesman in Afghanistan.

Also on Saturday, an Afghan military helicopter carried food and other necessities to residents of Gayan. Dozens of men and children gathered in an open space in the hot sun to wait for food, water and Afghan Red Crescent tents.

The aid organization said it would distribute relief items to around 1,000 families in the district, including food, tents and clothes.

On Friday, the Pakistan Meteorological Service reported a new 4.2 magnitude earthquake. The Afghan State Bakhtar News Agency said five people were killed and 11 injured in Gayan, one of the areas hardest hit by Wednesday’s quake.

Abdul Wahid Rayan, the Taliban director of Bakhtar, said the death toll as of Wednesday had risen to 1,150 people, with at least 1,600 injured. The United Nations Office for the Coordination of Humanitarian Affairs put the death toll at 770. It is unclear exactly how the death toll is reached, given the difficulties of access. Either toll would make Afghanistan’s deadliest earthquake in two decades.

In Urgan, the main town of Paktika province, medical supplies from the World Health Organization were unloaded at the main hospital. In the villages affected by the earthquake, UNICEF distributed blankets, basic supplies and tarpaulins to the homeless to use as tents. Aid groups said they feared cholera could break out after damage to water and sanitation systems.

On Saturday, in Spera district, Khost province, UNICEF distributed water purification tablets as well as soap and other hygiene items.

America’s religious communities are divided on the issue of abortion: 5 essential readings