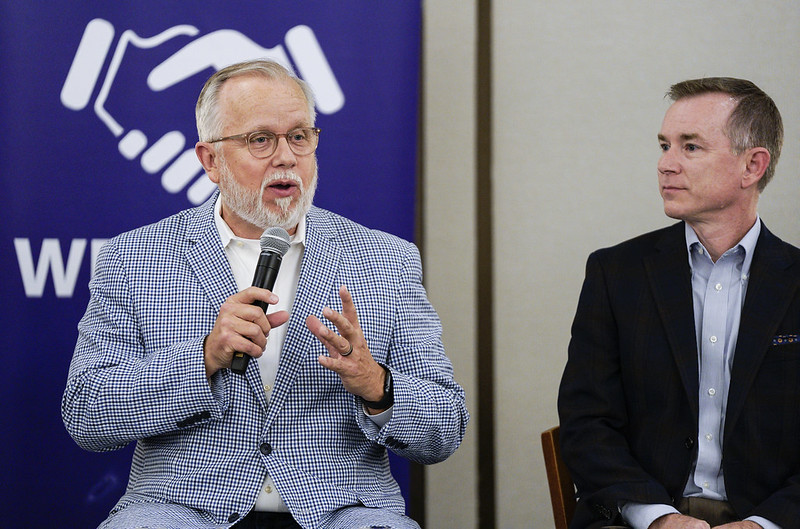 Southern Baptist Convention president Ed Litton warned of “tribal hostility, lack of grace and suspicion” within the denomination, reminding Southern Baptists that the world is “watching” how they deal with issues such as sexual abuse and racial reconciliation.

“In the toxicity of the conversation and the lack of civility, we do the opposite,” Litton, pastor of Redemption Church near Mobile, Ala., Said at the SBC executive committee meeting in Nashville, Tennessee on Monday night. .

“We must honor each other [and] those who struggle. The mood of our time is to attack, demonize, make allegations and threaten. We are rarely slow to speak and slow to anger. Why not come and reason together instead of promoting tribal hostility, lack of grace and mistrust of one another? “

Litton spoke hours after members of the executive committee debated whether the waiver of solicitor-client privilege requested by the sexual abuse task force would violate the SBC’s bylaws.

In June, SBC messengers voted for Litton to appoint a task force to oversee a third-party investigation into allegations that SBC executives mismanaged a “sexual abuse crisis” in the denomination.

Guidepost Solutions was tasked with â€œreviewing and improving the training provided to SBC executive committee staff and its board of directorsâ€ regarding sexual abuse and â€œorganizational communications to cooperating churches and faithful of cooperating churches â€.

The task force then asked the Executive Committee to waive solicitor-client privilege for the investigation.

Movement called on the executive committee to â€œaccept the best accepted standards and practices as recommended by the third party appointee, including, but not limited to, executive committee staff and members waiving solicitor-client privilege in order to ” ensure full access to information and its accuracy. in the review.

Speaking on Monday evening, Litton said his heart was “heavy” about the rally.

â€œI think we all feel the weight of it, and together we have to find a way forward for the glory of God,â€ he said.

â€œOur convention is in trouble right now,â€ he continued, â€œand it’s a crisis of confidence. Whichever way you call it, there is a solution and that solution is with us. Our churches want to see our entities working together in harmony, and they want to see the EC lead the way. “

Southern Baptists, Litton said, have “real concerns” about how abuse cases will be handled.

â€œPeople are watching, and what they are looking for is openness and transparency,â€ he said.

â€œThe world is watching,â€ he added. â€œThey will be watching to see what we are doing here this week about abuse. They will watch to see how sincere we can be about racial reconciliation. They will watch us at every turn and they will make decisions.

â€œOur actions will either trouble the Southern Baptists and their mission of carrying this gospel to the ends of the earth, or we will do what is right,â€ he said. â€œWe will do everything we can to build the trustâ€¦ that has been placed in us. “

Earlier in his post, Litton said that during his short time as president of the second largest Christian denomination in the United States, he was struck by the good Southern Baptists are doing in the world – from feeding the poor to helping disaster relief. to plant churches.

But the pastor said he had also encountered victims of sexual abuse and had seen their pain firsthand. He stressed that the SBC wants to fight against sexual abuse and racial reconciliation and desperately wants to unite.

â€œThe cross of Jesus Christ unites us like no other people can be united,â€ Litton said. “The only way the gospel stays above everything is if Jesus stays at the center of it all.”

Mainly due to the secularization of the culture, the SBC has lost both power and influence in society, the pastor said. Instead of succumbing to fear, Litton urged listeners to trust God for deliverance. He warned that failure to do so would lead to the type of fundamentalism that breeds fear.

â€œI always thought the word ‘fundamentalist’ was a good word,â€ he said. â€œThese are people who believe in the fundamentals. But there is a danger for fundamentalists. [Evangelist] Del Fehsenfeld Jr. said: â€œFundamentalism feeds on fear, strength and intimidation.

The theme for next year’s SBC annual meeting will be â€œChrist at the Center of Everything,â€ Litton said. He pointed out that SBC has a “disease” that can only be cured by Jesus Christ. He reminded Southern Baptists that, whatever their differences, Christ is “preeminent in all.”

â€œThe most common question I get asked as president is, ‘How are you going to unite the Southern Baptists?’ My answer is, ‘I can’t. It is a work of the Holy Spirit. But we are all called to unity, â€he said.

A citadel of faith and unity