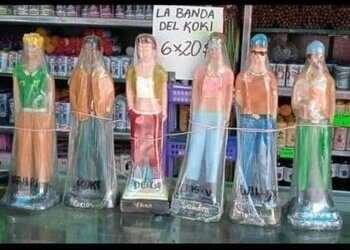 Caracas vendors have come up with an enterprising response to the Venezuelan capital’s descent into criminal warfare: to rename the devotional statuettes as El Koki, the gang leader responsible for the chaos.

Seen on stalls dedicated to Venezuela’s spiritualist tradition, the colorful statuettes of El Koki and his gang are priced at $ 20 for six, according to an image shared on Twitter by Impacto Venezuela July 20.

Carlos Luis Revete, aka “El Koki”, is the longtime crime boss in the populous Cota 905 neighborhood in Caracas. Its armed men have been fighting Venezuelan security forces since its aggressive takeover of neighboring La Vega in late 2020.

Revete and his lieutenants saw their notoriety take off by avoiding being captured by trickery or corruption, even as their images are pasted on police wanted notices.

But these action figures can also reveal a potential change in leadership in the gang. Koki himself is featured, as is his lieutenant, Carlos Alfredo Calderón Martínez, aka “El Vampi”.

Instead, the collection features “Delcy” and “Iris V” – a mocking reference to Vice President Delcy Rodríguez and Vice President of the National Assembly, Iris Varela.

Rodríguez was instrumental in creating the controversial “zones of peace”, which ceded territorial control to the El Koki gang in 2017. Varela is said to have had a murky relationship with prison gang leaders, known as of pranes, during his tenure as Minister of Prisons from 2011 to 2020.

Ideally, the figurines can be purchased with devotional candles.

With puffy blonde hairstyles and pink crop tops, the statuettes are far from a true likeness of Koki and his alleged political patrons. But the tongue-in-cheek marketing ploy is a testament to how the crime boss is carving out his place in Venezuelan criminal folklore.

The models come from the underground legend of Caracas of the corte malandra, or delinquent court – a spiritualistic cult that idolizes a group of mythical bandits. Contemporary gangsters call on these criminal spirits for protection when facing security forces, rival gangs, or jail time.

In the heart of the corte malandra is Ismael Sánchez. “Ismaelito” was said to have been a thief from a slum in Caracas who stole from the rich to give to the poor, and upon his death he was called to serve the neo-indigenous goddess María Lionza, according to El Estímulo.

The repackaging of this syncretic Robin Hood as Koki is a nod to Revete’s self-image as champion of the urban poor of Caracas. Despite his penchant for violence and extortion, the gangster is viewed as a benefactor by some in the neglected community of Cota 905, where he is known to throw block parties and distribute food and toys. .

Meanwhile, the satirical labeling of two Koki gang members after Delcy Rodríguez and Iris Varela shows the reputation of these politicians as protectors and facilitators of gang leaders.

Cults around criminal “saints” are a common feature of drug culture across Latin America, reflecting the ambiguous social status of criminality in a region plagued by massive inequalities and abuse of formal power.

Perhaps the best known is Jesús Malverde – a 19th century bandit from Sinaloa, northern Mexico, now revered as a narco-saint or “angel of the poor”.

We want to maintain the largest organized crime database in Latin America, but to do so we need resources.

What are your thoughts? Click here to send your comments to InSight Crime.

We encourage readers to copy and distribute our work for non-commercial purposes, with attribution to InSight Crime in the signature and links to the original at the top and bottom of the article. See the Creative Commons website for details on how to share our work, and please email us if you are using an article.

No complacency in the fight against COVID: Naveen

Worship: questioning the value of any congregation