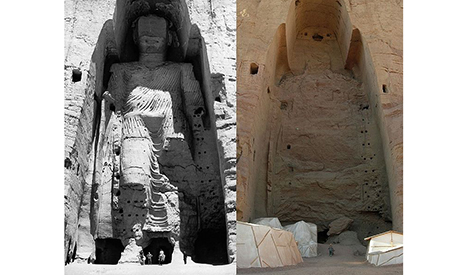 As Afghanistan enters a new period of uncertainty following the withdrawal of US forces from the country this year, many people might think of the events of 20 years ago before the US invasion of the country following the attacks on New York and Washington in September 2001.

Afghanistan at that time was largely under the control of the Taliban group which today has regained control of parts of the country. In March 2001, the group decided to blow up giant Buddha statues in the Bamiyan Valley in central Afghanistan, reducing these 6th century monuments to rubble despite international efforts to save them.

The destruction is recalled 20 years later in a small exhibition at the MusÃ©e Guimet in Paris which places the Bamiyan site in the context of the spread of Buddhism in the region and the work of French archaeological teams to excavate this site and similar sites in Afghanistan from from the 1920s.

Sometimes referred to as Gandharan art after the name of a region that once straddled regions of what are now Afghanistan, northern India and Pakistan, it brought together Hellenistic influences, most notably in the presentation of the human figure, with the Asian religion of Buddhism to create a remarkable cultural synthesis of east and west.

It was in 327 BC. After the end of Hellenistic rule in the region, the Kushan and other peoples who succeeded him retained aspects of Hellenistic culture, giving rise to the Greco-Buddhist art of the Gandharan region and the presentation of the Buddha. and Buddhist bodhisattvas in human form.

Much of our knowledge of this unique form of Greco-Buddhist art is due to the work of French archaeologists working with the French Archaeological Delegation in Afghanistan (DAFA), created as a result of an agreement between the Afghan government and the French authorities. in the 1920s to carry out archaeological work in the country and to help piece together its ancient history.

DAFA began working in Bamiyan in the late 1920s after conducting excavations in northern Afghanistan, once ancient Bactria, the heart of Hellenistic culture in the region. The exhibition recalls this work through its dedication to French archaeologists Joseph and Ria Hackin, who worked in Bamiyan in the 1920s and later died in World War II while working for the French Resistance.

It includes photographs and documents from the time, testifying to the negotiations that led to DAFA’s work in Bamiyan and its efforts to raise awareness of the ancient history of Afghanistan and successive civilizations around the world.

There are copies of images found in the surrounding niches or caves of the monumental Buddha statues, some of which survived their blasting by the Taliban in 2001. There is a splendid photographic panorama of the Bamiyan Cliffs taken in 2016 by the photographer French Pascal Convertir showing the empty niches in the rock face where the giant Buddha statues once stood as well as the spectacular surrounding landscape.

However, while the melancholy story of the destruction of these magnificent Buddha statues may come to many minds as the Taliban once again prepares to take control of parts of Afghanistan, it is a story that is by no means alone.

Even before the Taliban regime, from 1996 with the group’s takeover of the Afghan capital Kabul, the country had been largely destroyed by the civil war that had raged since 1989 following the withdrawal of Soviet troops and the loss of across much of the country by the cursed government of former Afghan President Mohammed Najibullah.

The damage inflicted on Afghan heritage and other sites during this period of civil war, characterized by campaigns by various militia groups, was as great as anything that was inflicted later by the Taliban.

The National Museum of Afghanistan in Kabul had been largely destroyed and almost completely looted in 1995. Stolen items from Afghan collections and heritage sites could be found for sale across the region and around the world.

In the post-US invasion period in October 2001, efforts were made to conserve Afghanistan’s surviving heritage sites and restore damaged facilities, including the National Museum. They included a major project at Bamiyan to conserve the damaged archaeological site as much as possible, as well as other projects at Hellenistic, Buddhist and Islamic sites across the country, notably in ancient Bactria, at Buddhist sites such as Mes Aynak and Tepe. Sadr and at Islamic sites in Herat in the west, Balkh in the north and Kabul in the east of the country.

Today, two Afghan sites are inscribed on the UNESCO World Heritage List, the Bamiyan Valley, including the remains of the Buddhas, and the Minaret of Jam, a 65-meter Islamic minaret built by Sultan Ghurid Ghiyas -ud-din in 1194 and located about 215 km east of Herat. Other Afghan heritage sites on UNESCO’s tentative list – not all documents have been completed for their inscription – include the ancient city of Herat itself, the ancient city of Balkh in the ancient Bactria, Band-e-Amir and the Bagh-e Babur in Kabul.

Some of Herat’s most important sites include the Masjid-e Jami, a 10th-century ghurid mosque with a characteristic entrance portal and huge central courtyard, and the Khwaja Abdulla Ansari mausoleum complex dating from the Timurid period. Balkh, an originally Hellenistic city developed during the Islamic era, was the birthplace of the Persian poet Jalal ad-Din Mohammad Rumi (1207-1273 CE). It retains remains of its ancient mud brick walls and includes important heritage buildings such as the Timurid Shrine of Khwaja Abu Nasr Parsa dating from 1460 CE and the 17th century Madrasa of Sayyid Sudhan Quli Khan.

Band-e-Amir is an environmental reserve. The Bagh-e Babur in Kabul, the Gardens of Babur, were created by Zahir ad-Din Muhammad Babur (1483-1530 CE) in 1504. He then conquered northern India in 1526, founding the Indian Mughal dynasty based in Delhi. According to the UNESCO quote, the Mughal heirs of Babur, including Emperors Jahangir and Shah Jahan, the builder of the Taj Mahal, often paid homage to his burial place in the Gardens of Babur and commissioned work to preserve them.

One of the most evocative of the earlier Hellenistic sites is Ai Khanum, perhaps the largest of all Greek cities built in the region following the conquests of Alexander the Great in the 4th century BCE. Identified as â€œAlexandria on the Oxusâ€ by its French excavators between 1964 and 1978, the city, located in northeastern Afghanistan, was founded by the Hellenistic Seleucid King Antiochus I Soter around 280 BC.

It was one of the best-preserved Hellenistic sites in Afghanistan, showcasing the extraordinary remains of an ancient Greek city in its own right thousands of miles from the center of Greek culture in the eastern Mediterranean. The archaeological site was looted and completely destroyed during the civil conflict in Afghanistan following the Soviet withdrawal, an invaluable loss to Afghanistan and the world as a whole.

Another site completely destroyed as a result of the civil conflict was Hadda near Jalalabad in eastern Afghanistan, the site of a series of Greco-Buddhist monasteries also excavated by DAFA. Some of the finds from these monasteries, including statues of the Buddha and Buddhist bodhisattvas, are now in the Guimet Museum in Paris, with similar statues once kept at the National Museum of Afghanistan having been looted or destroyed in the 1990s.

One of the most significant rediscoveries after the American invasion in 2001 was Tillya Tepe’s intact treasure of some 21,000 gold ornaments discovered in 1978 by a Soviet-Afghan archaeological team working on the site of the same name and dating from Hellenistic and Greco-Buddhist period.

After the Soviet withdrawal, the treasure was hidden under the National Bank building in Kabul, where it miraculously survived the warring militia groups that then sacked the capital. His pieces were first presented outside Afghanistan during the exhibition Afghanistan, the treasures found in 2007 (reviewed in the Weekly January 2007), which, first at the Guimet museum in Paris, then traveled to institutions around the world, causing a sensation.

The horde was returned to the National Museum after the building was reconstructed, as were many ivories from Bagram, a group of more than a thousand decorative ivory plaques discovered by DAFA near the Bagram site in northeastern Afghanistan in the 1930s. While the Bagram ivories kept at the Guimet museum in Paris are intact, those kept at the national museum were looted during the civil war in Afghanistan.

The present author remembers well the effervescence of the Afghan heritage community following the American invasion of 2001, when prospects opened for the resumption of archaeological work in Afghanistan and for the resumption of missions in a country. closed to almost all foreign teams from the early 1990s and made impossible. after 1996 with the advent of the Taliban regime.

Traveling to neighboring Pakistan soon after, it was possible to get a firsthand idea of â€‹â€‹what had been lost, the Pakistani sites of Gandharan, such as in Taxila west of Islamabad, showing the kind of management cautious site that might, under different circumstances, have been used to interpret the now-lost sites of Ai Khanum and Hadda in Afghanistan to Afghan and foreign audiences.

The wonderful collections of Gandharan artefacts kept in Lahore and more at the Peshawar Museum in Pakistan also poignantly reminded this writer of the type of materials that had been lost or destroyed at the Afghan National Museum during the Civil War.

Rumors were rife after the American invasion of what may remain hidden from the Civil War era at crumbling sites and facilities. Enormous quantities turned out to be lost forever, destroyed or looted and sold abroad, including much of the National Museum’s collections. Irreparable damage has been caused to sites across the country, in some cases destroying them entirely.

But much of the reconstruction work, including that of the National Museum, has been done over the past 20 years, and once dreaded material like Tillya Tepe’s horde is once again on display. It would be a tragedy if events like those that took place in the 1990s in Afghanistan were to repeat themselves following a possible increase in insecurity in the country following the withdrawal of American forces.

* A version of this article is published in the September 9, 2021 edition of Al-Ahram Weekly.