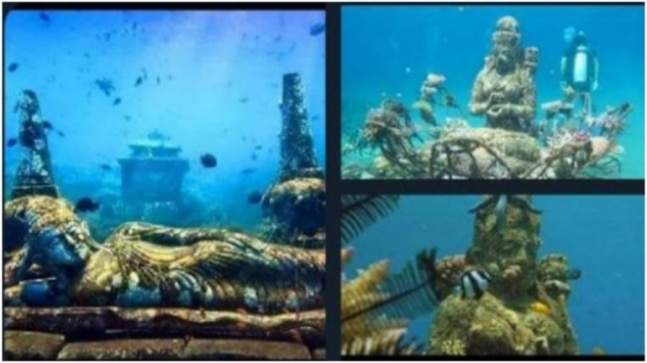 Fact Check: These Are Not 5,000 Year Old Hindu Idols Found In The Sea Off Indonesia

A collage of several images of underwater sculptures has gone viral on social media, claiming they are 5,000-year-old Hindu idols found in the sea off Bali in Indonesia.

Many Twitter and Facebook users posted the collage with the caption: â€œ5,000-year-old Shri Vishnuji was found in the Bali Sea, Indonesia. Now Mahabratha according to @NileshOak ji is around 5500BC. So which Rajya of Bharat was Indonesia and did he participate in the Mahabharata? Sanatan has always been present in South Asia up to the border of Akhand Bharat @SatyaSanatanInd â€.

India Today Anti Fake News War Room (AFWA) has discovered that these stone idols are part of an artificially created underwater garden in Pemuteran, north Bali. The sculptures were created by divers in 2005 as part of a coral reef conservation project.

Using keyword research, we found out that these images had been circulating the Internet since 2010. Among other similar photos and videos, we found a YouTube video posted by a certain Paul Turley in 2012 with the title â€œUnderWater Temple Garden Pemuteran Baliâ€. Similar underwater structures can be seen in this YouTube video.

According to the video description, Turley had shot the video at the “Underwater Temple Garden just off the ‘temple wall’ dive site in Pemuteran.” It is “part of the ‘Reef Gardeners’, a social / environmental project created in 2005”.

Turley is the owner of “Sea Rovers Dive Center”, a tourism agency in Bali. According to a blog he wrote, people used his images and shared them on social media along with make-believe stories about an underwater Hindu temple.

â€œApparently someone took my picture, posted it on Twitter, and claimed responsibility for an archaeological find off the coast of Bali. It went global thanks to the Internet and an urban legend was born, â€Turley wrote in his blog.

International news sites such as “BBC News” and “The Telegraph” had published articles on Turley and Bali’s underwater sculptures.

But Turley says the original concept for creating this underwater garden was that of Chris Brown, an Australian and founder of the Reef Seen Divers’ Resort in Bali.

According to the resort’s website, the Underwater Temple Garden was established in 2005 for the conservation of coral reefs in the sea. â€œA feat of engineering, with more than ten large stone statues resting on stone plinths. and a Balinese candi bentar footbridge 4 meters high. It sits at a depth of 28 meters and incorporates a cleaning station with schools of baitfish, â€describes the project website.

There is another video of the Underwater Temple Garden which can be found on Turley’s YouTube channel.

Therefore, it can be concluded that the viral images of underwater sculptures are not 5,000 years old. 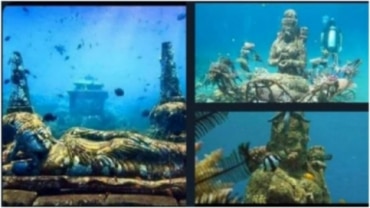 Claim5,000-year-old idols of Lord Vishnu have been found under the sea in Bali, Indonesia.ConclusionThe stone idols are part of an artificially created underwater garden in Pemuteran, in northern Bali. The sculptures were created by divers in 2005 as part of a coral reef conservation project.

The number of crows determines the intensity of the lie.