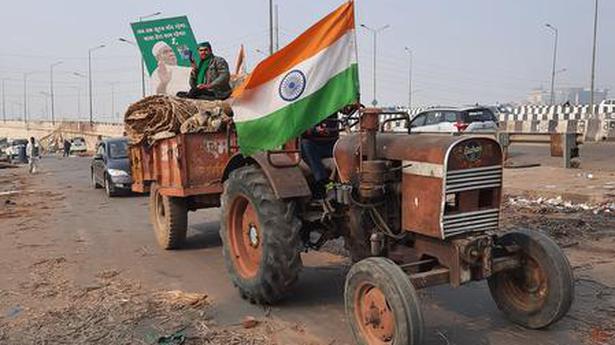 Three hundred and eighty-three days after starting to gather at the Ghazipur border which connects Delhi to western Uttar Pradesh, farmers returned to their respective towns and villages after staging a “fateh” march (victory), commemorating their success in getting the three central firm laws repealed.

Bharatiya Kisan Union (BKU), who led the protests in the region, held a ritual in the morning before the convoy of his national spokesperson Rakesh Tikait headed for his village Sisauli, the union’s headquarters in the Muzaffarnagar district, stopping for receptions in Ghaziabad and Meerut en route.

Sisauli and Soram – the headquarters of various khaps in the area – were decorated with lights and sweets were handed out as Mr Tikait visited his village for the first time since the unrest began last November.

As a lasting memory of the 13-month struggle, the farmers painted graffiti on the flyover wall that mentions the period of their stay at the border. â€œThis is a victory of our will and determination,â€ said a group of farmers, packing their belongings ranging from cots and tarps to logs and motorcycles. Everything was packed in wagons attached to tractors that were obviously over ten years old. While the police looked away or chose to sip the langar tea serving the last meal, the ragpickers had fun picking up the day’s leftovers. Stray bulls kept at bay during this time returned to languish on the service road which was still blocked at one end by barriers put up by Delhi police.

Ikram, an elderly farmer from Garh region, Hapur district, said he was satisfied with the outcome of the unrest. “Der aaye durush aaye [better late than never]. We cannot say that we are happy because we have lost many of our brethren in the past year, but I thank the government for responding to our voice. The rest of the demands, he said, could be met in due course. “It is a process and elections are on the horizon,” he noted.

“Focus on the business of work”

In the late 1980s Gandharv Singh from Auraiya in the Etawah district spent eight months at the border. “The government should refrain from ‘dharm ka dhandha [business of religion]’and instead focus on’ karm ka dhandha[laboraffairs)’â€heemphasized[affairesdutravail)’Â»a-t-ilsoulignÃ©L’inflationa-t-ilnotÃ©acontinuÃ©d’affecterlesagriculteursetlegouvernementacontinuÃ©Ã sauverunministrechargÃ©d’Ã©craserlesagriculteurs[businessofwork)â€™â€hestressedInflationhenotedcontinuedtoaffectfarmersandthegovernmentcontinuedtosaveaMinisterwhoisresponsibleforcrushingfarmers

â€œWe haven’t forgotten the pain we have suffered over the past year. It simmers like these ashes, â€he observed, pointing to the remains of the ritual that kept him warm during the winter of the NCR (Regopn of the national capital).