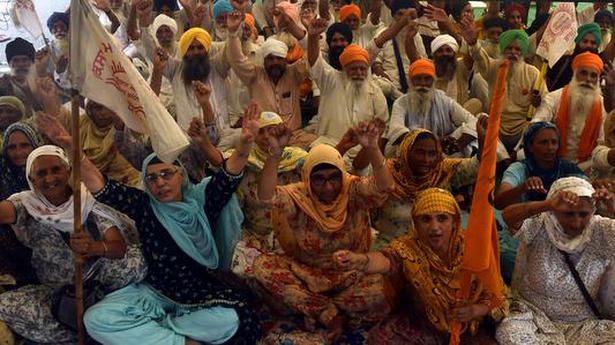 200 farmers, equipped with identification badges, will come to Jantar Mantar.

Farmers will organize peaceful protests in Jantar Mantar to demand the repeal of agricultural laws and no demonstrators will go to parliament where the monsoon session is underway, an agricultural union leader said on Tuesday after a meeting with local farmers. Delhi Police officials.

Rashtriya Kisan Mazdoor, National President of Mahasangh, Shiv Kumar Kakka, said PTI that every day from July 22, 200 farmers, with identification badges, will travel to Jantar Mantar from the Singhu border to organize the protest.

The Samyukta Kisan Morcha (SKM), a coordinating body of more than 40 farmer unions behind the agitation against central farm laws, predicted that around 200 farmers would demonstrate in front of parliament every day from July 22 during the monsoon session.

The monsoon session of Parliament began on Monday and is expected to end on August 13.

“We have informed the police that every day 200 farmers will travel to Jantar Mantar from the Singhu border by bus during the monsoon. It will be a peaceful demonstration and the protesters will have identification badges.

“When the police asked us to reduce the number of demonstrators, we told them to focus on the public order situation and also gave assurances that the demonstration would be peaceful,” Kakka said.

No written communication has yet been received from the police, he said.

“The police have been informed that the protest will be peaceful. We will be sitting in Jantar Mantar from 10 am to 5 pm. No one will go to Parliament and we will not allow any political person to come to the demonstration,” he said.

A tractor parade in Delhi on January 26, which was supposed to highlight demands by farmers’ unions to repeal three new farm laws, dissolved into lawlessness on the streets of the nation’s capital as thousands of protesters marched through barriers, fought with police, overturned vehicles and hoisted a religious flag on the ramparts of the iconic Red Fort.

In a meeting on Sunday, Delhi police called on farmers’ unions to reduce the number of people attending the protest, but this was refused by farm union leaders.

SKM has already said there are no plans to besiege parliament and that the protest will be peaceful and disciplined, he said in a statement.

The umbrella body of the farmers’ union said earlier that two days before the start of the monsoon session, a “chetavani patra” (warning letter) will be issued to all opposition MPs to protest against the agricultural laws within the House.

Thousands of farmers across the country have stirred at Delhi’s borders against the three farm laws they say will remove the minimum price support system, leaving them at the mercy of big business.

More than 10 rounds of talks with the government, which drafted the laws on major agricultural reforms, have failed to break the deadlock between the two sides.