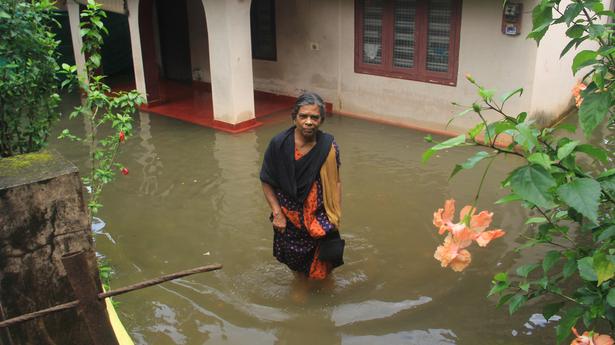 Even as the torrential downpours that hit different parts of the region the other day stayed away on Tuesday, overflowing rivers and overflowing reservoirs kept the central region of Travancore on the sidelines for another day.

Water levels in all major rivers in the region have seen a sharp rise due to extreme rains that battered the highlands for several hours from Monday evening. The water level of the Meenachil River, which had crossed the warning level in the morning, dropped in the afternoon. The Manimala River also recorded a sharp rise in water levels, although well below warning levels.

The unusually heavy rains for the region have also added to the misery of farmers, who are certain to lose a substantial part of their Onam harvest.

The lower parts of Kottayam town, meanwhile, suffered heavy flooding with runoff from the upper reaches, including places like Pampady, which had witnessed flash floods. Vehicles and pedestrians were seen pushing through the floodwaters on several roads.

Meanwhile, people residing in areas such as Pampady, Karukachal, Nedumkunnam and Thottakkad who had witnessed flash floods the other day returned to their homes and started the clean-up operations.

Groups equipped with gloves and pressure washers pulled soaked furniture out of flood-affected homes and placed them in the sun. Thick layers of mud, scooped up from houses with shovels, were carted away to be dumped.

At Pathanamthitta, all major reservoirs filled to the brim, increasing flow to various rivers. In the 24 hours which ended at 6am on Tuesday, the district received heavy rains with Thiruvalla recording the highest volume of 86mm.

Red alerts were issued for the Moozhiyar and Kakki reservoirs, which were reaching capacity while all the gates of the Pamba reservoir, where the water level stood at 978.35 meters against the full reservoir level of 986.33 meters, remained closed.

In light of the forecasted heavy rains, District Collector Divya S. Iyer has imposed a ban on mining and sand extraction activities until September 4. A ban on night travel and tourist activities has also been declared.

As of Tuesday, 66 people from 17 families were staying in four relief camps across Kozhencherry and Mallappally taluks.

The monks who took the kora to church