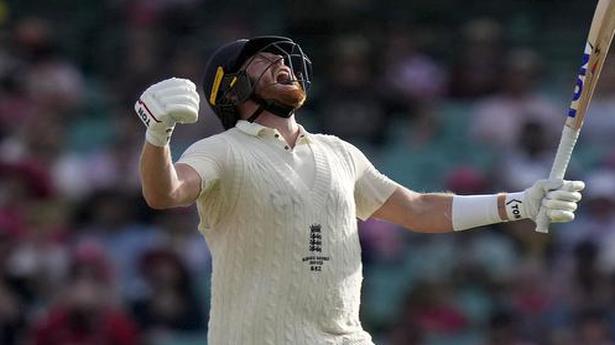 At the stumps, Bairstow was not out 103 and Jack Leach was on four, England trailing Australia by 158 points.

A courageous century for Jonny Bairstow and half a century for Ben Stokes have helped England return to 258-7 after a terrible start to Day 3 of Ashes Test Four on Friday at Sydney Cricket Ground.

Bairstow marked the first century for tourists in their seventh inning of this series to headline a day when England collapsed to 36-4 at lunch before their middle order counterattacked to help the England to return to the game on another rainy day at SCG.

In clear pain after being hit in the thumb by a delivery from Pat Cummins and with partners running, Bairstow started attacking almost every ball and raised a deserved century from 138 balls with 12 limits and three minutes. before the stumps by slashing a delivery of Cummins for four.

Bairstow celebrated his seventh century test by running halfway to the England team’s dressing room with arms in the air, where his team-mates had gathered to recognize a vital round against the backdrop of the match that seemed previously move away.

At the stumps, Bairstow was not out 103 and Jack Leach was on four, England trailing Australia by 158 points.

Previously, Ben Stokes had made 66 of 91 Ã©pÃ©e balls, including nine fours and a massive six on cover, in a 128-point partnership with Bairstow that stabilized England’s innings after their early collapse.

Nathan Lyon ultimately ended the 128-point partnership by trapping Stokes lbw with a ball that stayed lower than expected.

He may have been fortunate enough to get this far before the tea survived a strong missed opportunity from Pat Cummins, then successfully revisiting an exit decision to the field where the ball had actually missed the pad and pops the stump. but not dislodged the deposit.

Shortly after lifting his half century on 80 balls, Bairstow was struck by a Cummins ball that rose out of the field and hit the batsman on the go. Bairstow received ground treatment for several minutes before resuming his sleeves, but was visibly uncomfortable holding the bat.

Jos Buttler became the second duck in the round to crush Khawaja for Cummins cover (2-68) to reduce England to 173-6 and in danger of not avoiding the 218 follow-up goal.

But Bairstow and Mark Wood combined for an unbroken 72-run partnership to dampen visitors’ nerves before Cummins finally got Wood to Lyon for 39 balls of 41 for one big too many.

Ahead of lunch, England’s batting weaknesses were again exposed by attacking to pace Australia after their resumption at 13 unbeaten in a session delayed by rain.

Haseeb Hameed was dropped out of two by wicket keeper Alex Carey in Mitchell Starc’s second round, but the reprieve only cost four points as Starc (1-49) pitched the opener for six in his next round.

Zak Crawley, who survived a non-ball from Starc at the end of Matchday 2, received a quick hit to the hand through the left arm before Boland found a way through his defenses and reached the top of the stump when the 18.

Scott Boland (2-25) then had Root caught sliding for a duck on his next pass, with the English skipper again playing away from his body and closing in on Steve Smith on the second slide.

Dawid Malan (3) was sacked before lunch, caught by Usman Khawaja out of Green’s bowling alley leaving England in tatters at the break.

Boland was taken in for a precautionary scan as he tumbled into his follow-up with the last bullet before tea. Australian team management later said the 32-year-old, who made a sensational debut in Melbourne to help Australia retain the Ashes, was “cleared of any damage” and then returned to the game. .

Bad weather early Friday did not dampen the McGrath Foundation’s ‘Pink Test’ fundraising efforts, chaired by former test pacemaker Glenn McGrath, who for the past 14 years has been a hallmark of the third day of the Sydney test.

Most of the 28,415 spectators wore pink clothes and one of the stands at Sydney Cricket Ground was covered with pink banners to celebrate the association’s work.