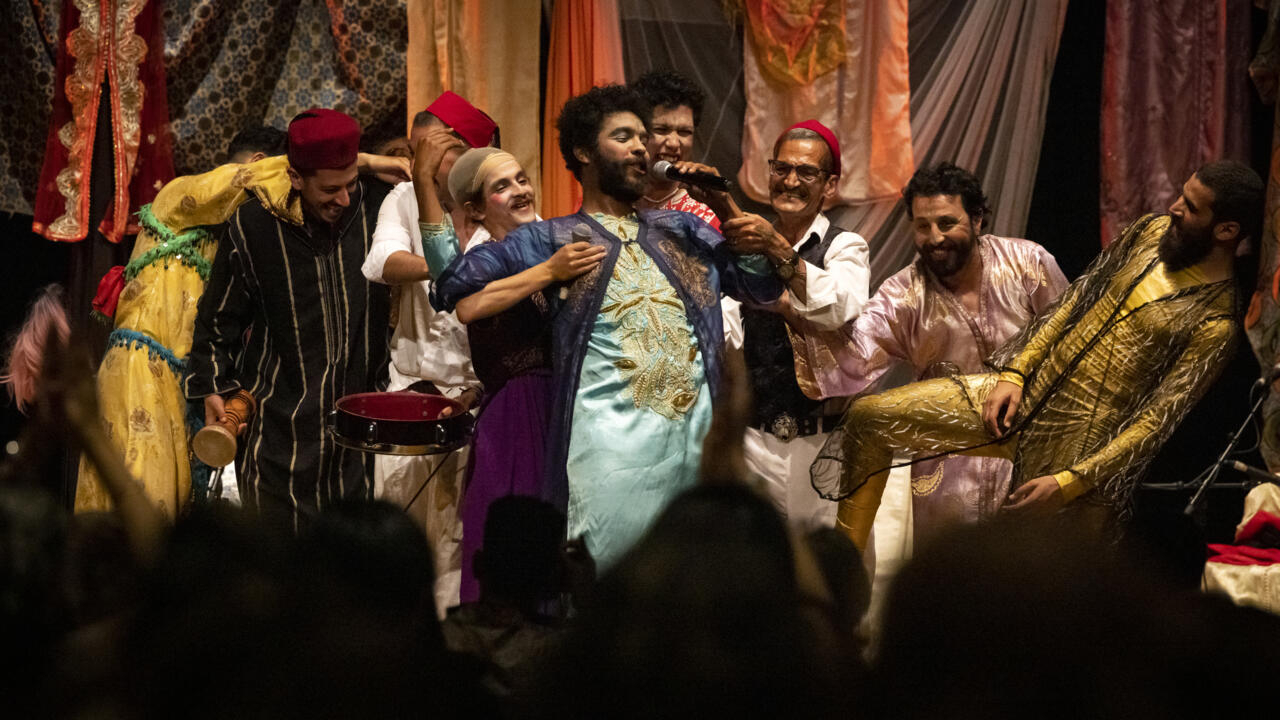 Rabat (AFP)- Men in makeup and wigs twirl on stage in colorful dresses to applause in Morocco, resurrecting the musical artistry of “Aita” and challenging gender stereotypes in the conservative Muslim-majority kingdom.

Members of the all-male ‘Kabareh Cheikhats’ troupe, comprising singers, actors and dancers, hope their unique performances of an art once dominated by women can revive the tradition.

“This art, based on oral histories, has its roots in the 12th century and draws its poetic strength from everyday life,” said writer and poet Hassan Najmi.

The group travels across the North African nation mapping the many varieties of Aita, a genre that has long been popular in the countryside.

Recently returned from a tour of the United States, they put on a frenzied performance that had the audience of a packed theater in Rabat on their feet, with men and women dancing in the aisles.

The music chronicles traditional life and depicts the spectacular nature of Morocco, while speaking candidly about love and sex.

When Morocco was under French rule from 1912 to 1956, aïta became a form of anti-colonial resistance, expressed in dialects that the authorities had no chance of understanding.

The songs had gained royal recognition by the end of the 19th century, under Sultan Hassan I.

“At that time, the authorities paid special attention to this music because they could use it as a vehicle for propaganda,” Najmi said.

Until the 1990s, famous “sheikhate” singers were invited to national festivals and ceremonies.

But social and cultural changes in Morocco – including the shift of some to more conservative religious values ​​– have knocked them off their pedestal.

“They became symbols of debauchery,” Najmi said. “This contempt is the fruit of the hypocrisy and double talk of a part of society.”

Amine Naouni, one of the actors in the troupe, said Kabareh Cheikhats shamelessly pays tribute to “strong women” of the past.

“In the show, we didn’t invent anything,” Naouni said. “All we do is revisit things that already existed in the company.”

The group’s founder, Ghassan El Hakim, said the aim was to promote appreciation of the “precious” heritage.

“That’s what drives our work,” said the 37-year-old. “Six years after the birth of the troupe, we are still learning, we are constantly researching.”

The show begins with an “Aita jabalia” from the mountainous north of the country, followed by one from the ancient capital Fez, then another from the Doukkala-Abda plains which are the heart of the music.

The idea of ​​men dressing up or pretending to be women in the theater is not new in Morocco.

Naouni, 28, said he was initially worried about being “judged”. “Over time, that feeling went away,” he said.

Najmi said men used to dress up as sheikhates at weddings.

“We used to see men wearing makeup, wearing kaftans and dancing sensually at parties, and it wasn’t seen as a problem,” Najmi said. “It was considered normal, as the public space was closed to women.”

But Kabareh is a new take on old traditions.

“At each performance, I see the communion of the spectators,” he said.

“Everyone enjoys the moment, despite our differences, so I think it’s possible to live together, not just for a show.”

But the shows have drawn condemnation from some on social media.

Naouni believes, however, that these reactions “are limited” to the Internet.

“It’s easy to pour out your hate behind a screen, but in real life it’s different,” he said.