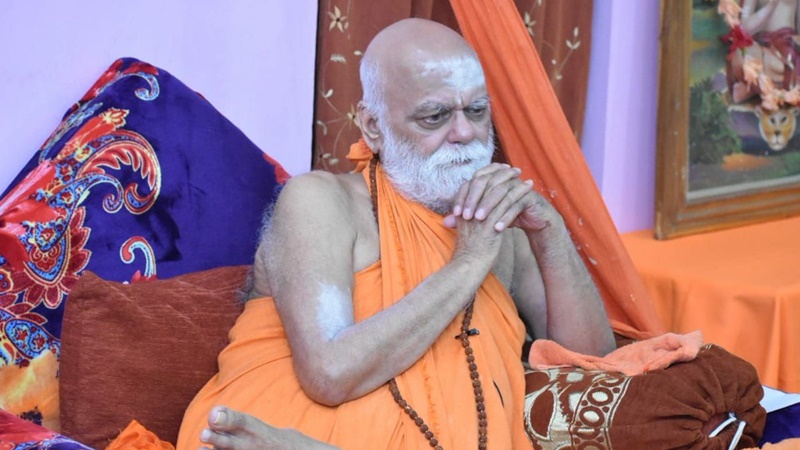 Swami Nischalananda Saraswati, the Shankaracharya of Gobardhan Peeth, Puri, who visited the annual Gangasagar Mela in West Bengal to bathe at the confluence of the Ganges and the Bay of Bengal, and offer prayers at Kapil Muni Temple on the auspicious occasion of Makar Sankranti, once again spoke out in favor of declaring India a Hindu Rashtra.

Speaking at a press conference on January 13, on Thursday, the revered seer from Puri said he had held video conferences with top representatives from 52 countries, during which representatives from 15 nations including Mauritius and Bhutan, have stated unequivocally that if India declares itself a Hindu Rashtra, they will follow.

Furthermore, the saint also shared his concern over the persecution of Hindus in Bangladesh. He expressed concern over the desecration of idols and the targeting of Hindu temples and deities in the neighboring country.

While minorities can live comfortably in India, why can’t Hindus be safe in Bangladesh? Puri Shankaracharya expresses his dissatisfaction with the persecution of Hindus in Bangladesh

Expressing his displeasure at the demolition of idols of Hindu deities in Bangladesh, Shankaracharya said, “When minorities can live comfortably in India, why can’t Hindus be safe in Bangladesh? Bangladesh is carved out of India itself. The insult of Hindu gods and goddesses cannot be tolerated anywhere in the world, remarked Swami Nischalananda Saraswati.

On the Gangasagar fair held in the shadow of the pandemic, Shankaracharya spoke sternly, “Vidhan Sabha elections were held in various states during the Corona period and will also be held in the future. When there is a political program, politicians don’t have a Corona vision, but when religious programs are organized, the Corona issue starts to rise”.

Shankaracharya further took offense to the transformation of pilgrimage sites into tourist attractions. It is not right to give the form of Bhog Bhoomi (land of lust) to Tapobhoomi (land of penance), exclaimed Puri Shankaracharya Swami Nischalananda Saraswati.

It may be recalled that in October last year, the seer Puri concluded that India would become a Hindu nation within the next 3.5 years. Addressing his followers, Swami Nischalananda Saraswati considered that Hindus were the ancestors of all who lived in India. Sanatan Dharma enriched their lives. Converts should be reintroduced to Hinduism by informing them of their history, the Puri seer said, adding, “Hindi is spoken by 40 percent of the country’s population. Sanskrit is also included in Hindi. Sanatan Dharma ideas are properly conveyed in Hindi versions of Vedas and Puranas. Therefore, Hindi language should also be promoted.

Also earlier in the year 2020, the seer called on the United Nations to declare India, Bhutan and Nepal as Hindu Rashtra. In an interview with the media, the seer from Puri had said that many of the 204 nations of the world had been designated as Muslim and Christian countries. Despite the fact that these countries have a large Hindu population, there is no specific Hindu country. The United Nations should take note of this and designate India, Nepal and Bhutan as Hindu countries, as well as take appropriate measures to help Hindus who have been tortured and persecuted in other countries, the seer argued.

Seer Puri is not alone in supporting the idea of ​​India being declared a Hindu Rashtra. On September 29, Seer Jagadguru Paramhans Acharya Maharaj of Tapasvi Chavani in Ayodhya had also demanded that India be declared a ‘Hindu Rashtra’ by October 2. He added that if the central government does not respond to his request, he will take ‘Jal Samadhi’. in the Sarayu River at noon on Mahatma Gandhi’s birthday. He also urged the Center to end the citizenship of Muslims and Christians.

Earlier, Paramhans Acharya had started a 15-day fast until death for the same issue. He broke the fast only after Home Minister Amit Shah met him.