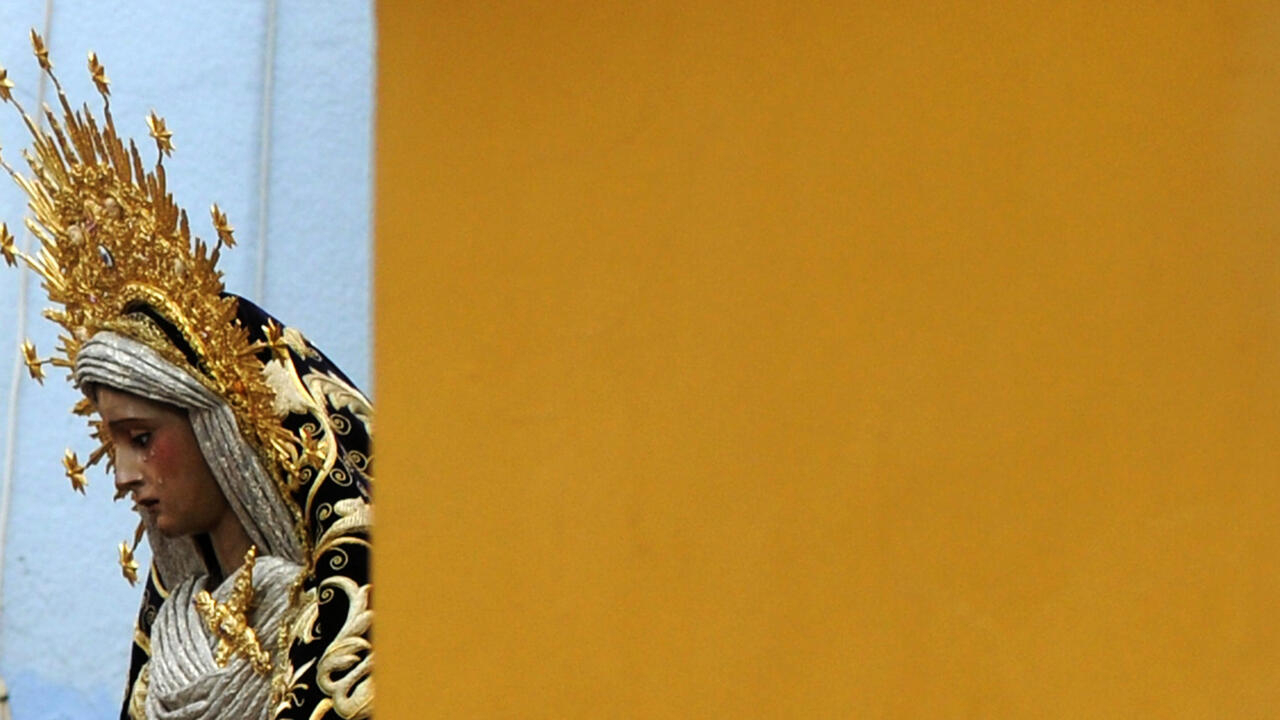 But their participation in this week of religious processions which marks the apogee of the Catholic calendar has a price: silence on their sexual orientation.

And it’s a compromise that makes them increasingly uncomfortable.

“Holy Week in Seville is a contemporary celebration that dates back to the late 19th century and the gay community has been involved from the very beginning,” says Rafael Caceres, an anthropology expert at Pablo Olavide University in the southern city of Seville.

The Andalusian capital is a hive of activity ahead of Holy Week, which begins on Palm Sunday – April 10 – and culminates on Easter Day when Christians remember the death and resurrection of Jesus.

Thousands of people throng the streets to watch life-size models of the Virgin Mary and Christ carried through the streets by different brotherhoods and religious associations.

The characters are meticulously dressed and adorned by volunteers from religious associations.

“There are florists, embroidery specialists, jewelers, stylists” who work together on the blank figures and “almost all of them are homosexual”, explains Pedro Pablo Perez Ochavo of the Ichtys [email protected] LGBT+H of Seville which campaigns for equality within the Catholic community. Church.

“A path to integration”

With their role in the brotherhoods, homosexuals can find “a way to integrate”, a space in which “their artistic work and their personality are valued”, said Carlos Carvento, a 26-year-old dancer and drag queen from Cordoba. .

“Acceptance is based on this: a person can be a virgin and gay dresser but he wouldn’t tell. As long as his public life is reasonably discreet so as not to tarnish the brotherhood,” explains Caceres, the anthropologist.

“The attitude of the Church is rather laissez-faire as long as there is no scandal,” said Jesus Pascual whose 2021 documentary film “Dolores, guapa!” explored the links between Andalusia’s gay community and Holy Week.

But Antonio Munoz Tapia started having problems after marrying partner David in 2016.

“If you don’t have a partner, if you live alone and are silent like me, they don’t cause you any problems”, explains this 50-year-old businessman who works in the oil sector.

Two decades ago, he created a brotherhood in Dona Mencia, his village near Cordoba, assuming the prestigious role of his “big brother”.

But since he got married, requests for him to give the speech that opens Holy Week in his village have faded away.

And more recently, the Church printed its annual fellowship magazine without including its article calling for equality for the LGBT community.

Munoz Tapia says he has never experienced such an attitude within the brotherhood or among the locals, as Spain is a country where people are very open-minded about LGBT issues.

“I just don’t understand this self-righteous attitude – that we’re good enough for brotherhoods but not good enough to deserve equal rights,” he said.

The Archdiocese of Seville told AFP that it “in no way has a register specifying the sexual identity of people” and that “anyone who wants to experience Holy Week deeply in Seville can do so without any problem. “.

However, the diocesan rules stipulate that these leaders of brotherhoods or religious organizations must “stand out for their Christian lifestyle in their personal life, their family life and in society”.

“They don’t use the word ‘gay’ but they use this article” against those who identify as LGBT or divorced people, says Ochavo of Ichtys.

Jose Victor Rodriguez and Jose Luis Medina, fashion designers known as ‘Victorio’ and ‘Lucchino’, married in 2007 and soon after a Seville newspaper published a letter criticizing the fact that they were allowed to dress the Holy Week virgins.

“We have led a more upright and moral life than many others,” Medina insists, calling the attack letter “despicable.”

Lady Gaga against Our Lady of Sorrows

Her photo on Instagram was first taken down following several complaints, but was later allowed.

“They often say that [the gay community] resumes (this annual tradition) but I’m not taking anything back because it’s also mine!”

During Holy Week, dozens of different Virgin Marys parade through the streets with Our Lady of Sorrows, Our Lady of Mount Carmel, Our Lady of the Broom and Our Lady of Hope of Macarena among gay community favorites .

“You may have a gay fan of Lady Gaga or Rosalia in Barcelona but here we are fans of the Virgin of the Macarena or the Glorious Ascension, or Our Lady of Sorrows,” Carvento smiles.

“Take care of your health by taking care of the planet”

The lesson of a spoonful