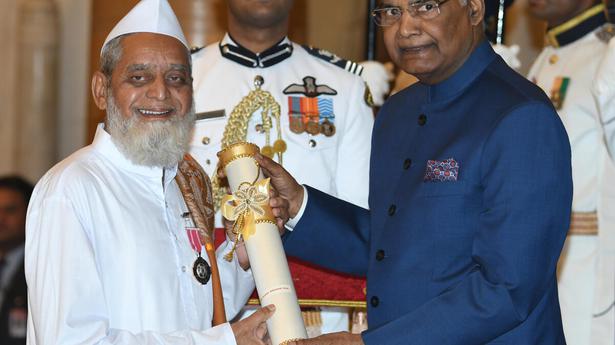 ‘Karnataka’s Kabir’ and Padmashri Ibrahim Sutar have passed away

Ibrahim Sutar, a polyglot folk singer, who traveled across India spreading the message of Hindu-Muslim unity, died on February 5 in Mahalingpur, Bagalkot district. He suffered a severe heart attack around 6:30 a.m. He died minutes later, family sources said. He was 82 years old. He leaves behind his wife, son and two daughters.

The recipient of the Padmashri Prize for Community Harmony had earned the nickname “Kabir of Karnataka”.

The founder of ‘Bhavaikyate Bhajana Mela’ began his career as a singer of Harikathe bhajans traveling through villages and towns. He regaled the audience with stories from Hindu and Islamic scriptures, always leaving a message of harmony and the need for ethics in personal life. He sang songs and gave lectures, quoting from several scriptures without needing to read notes. He was also well versed in Kannada and Urdu.

Later in his life, he became a public speaker, visiting schools, colleges and Lingayat pooches to talk about vacana and dasa Literature. He was awarded the Karnataka Rajyotsava Prize in 1995 and the Padmashri Prize in 2018.

Born into a family of poor weavers in Mahalingpur, he dropped out of primary school to work as a weaver’s assistant. He developed a spiritual bent of mind early in life. He started attending lectures in the Sri Basavananda Swami mutt and participating in bhajans at the Sadhu Maharaj temple. He was a member of the mosque committee that toured the villages, asking worshipers to wake up early during the month of Ramzan. He studied Hindu and Islamic scriptures with equal zeal and developed a team of bhajan singers. The ‘Bhavaikyate Bhajana Mela’ has occurred in Karnataka and Maharashtra.

A routine performance was in the form of questions and answers interspersed with songs by dasa saints and vachanas. One of the team members asked a question that sounded very ordinary, but had deep spiritual undertones, like, “Who is important in life – god or guru? Sutar used anecdotes from the Ramayana and Mahabharata, Islamic scriptures and stories from the lives of the prophets to deliver his opinion, which was aimed at the audience rather than the team member who kept asking questions.