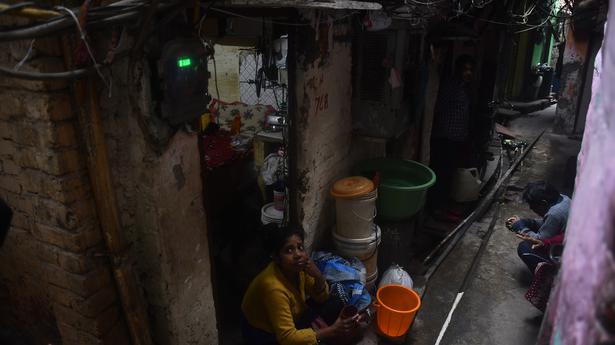 Most residents of Bhoomiheen Camp – a group of jhuggi jhopri – in Kalkaji are disappointed with the Delhi Development Authority’s decision to allocate Economically Weaker Section (EWS) apartments to 679 households in the proposed the agency at A-14, Kalkaji Extension.

The reason for their resentment: only 25% of the apartments (total 2,700) have been allocated while the “majority” of them provide all the necessary documents.

Talk to The Hindu, some residents said they might never get an apartment under the project because their numbers in the camp exceeded the total number of houses allocated by the DDA.

Talk to The Hindu

According to the DDA, on Tuesday deficiency letters were sent to the remaining households in the camp, asking them to submit the documents required to fulfill their housing eligibility under the agency’s in situ slum upgrading project.

The project is part of the Pradhan Mantri Awas Yojana (PMAY), which is implemented by the Ministry of Housing and Urban Affairs with the aim of providing adequate housing to eligible slum dwellers, people belonging to low income groups and medium and SAPs. .

For Sapan Shah, 59, a resident of the camp, the wait to move into the house promised under the project has remained a distant dream. “I have submitted all the required documents but my name is not there among the 679 households that will receive the allocation letters. I and many others in this camp have been waiting for the allocation of apartments for many years. We only saw delays and false promises,” he said.

Another camp resident, who did not wish to be named, said an entire camp block was omitted from the allotment list despite families submitting required documents.

“We are going to organize a grievance camp for the residents because there are gaps in their documents. There are people who have not submitted their applications although they have been informed. Many have rented their homes at the camp and live elsewhere. We are following the procedure according to the policy,” a senior DDA official said.

While residents of Bhoomiheen Camp expressed their displeasure at being left out, residents of neighboring JJ groups – Navjeevan Camp and Jawaharlal Nehru Camp – were upset by the DDA’s decision not to include their accommodation in the Kalkaji project.

According to another senior DDA official, a housing project based on a public-private partnership model has been prepared for both sides and tenders will be launched soon.

Residents of both camps have pointed out that the Kalkaji project also aims to house some of their households, and the DDA’s decision “will now lead to another long wait”.

“I spent decades in this place and who doesn’t want decent housing? We were hoping to move to Kalkaji apartments. The new regime is something we weren’t aware of. It is only during election season that we hear such promises,” said Radish Ahmed, 42, who has lived in Navjeevan camp since 1991.

Jagdish, a scavenger from the Jawaharlal Nehru camp, had a similar view. He stressed that residents can “only wait” because “they don’t have the power to ask the government”. “We will wait forever because we need the houses. The government is powerful and we cannot oppose or question its decision.

The senior DDA official said the decision not to accommodate households from the two camps of the Kalkaji Extension Project was taken “much earlier because we cannot accommodate them all”.

“The Kalkaji project was undertaken by the DDA and not on a PPP model, so we need to recover the cost. Through the PPP, we will ask the promoter to provide housing for both camps, as well as an income-generating component. The promoter will have to vacate the two camps while offering residents either transit accommodation or rental fees. On vacation, a particular part of the land will be given to the DDA, which we will seek to sell,” he said.

Believe that life will always get better