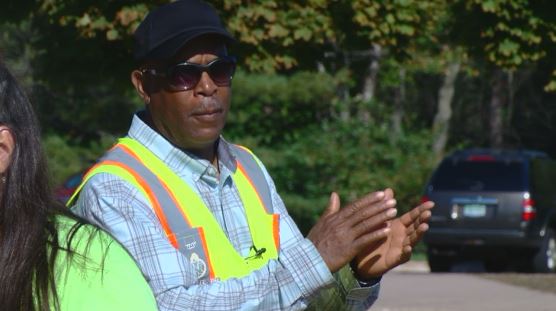 One of those volunteers was Gerry Evans. He said he was also called â€œThe Deacon,â€ simply because he was an ordained deacon from New York.

â€œI am here today because part of my ministry, the ministry of deacons, is to help serve and share the love of God through volunteerism and service. We go to soup kitchens and help people wherever we can, â€Evans said.

Evans has been in the Upper Peninsula since Thanksgiving 2020. Prior to that, he spent years traveling the country, helping where help was needed.

â€œI was in Houston, Texas for three years before I came here. I went there right after (hurricane) Harvey. I did a lot of missionary work there. I stayed there for about three years and then spent two months in New Orleans after Hurricane Delta hit Lake Charles. I was also working there with the Red Cross. Then a pastor friend I was there with told me about the Room at the Inn shelter. So I came here to help them, â€Evans said.

â€œSince there is a real need, especially with COVID and a lot of things going on. It’s not just the physical and the spiritual. And if you talk to people and just listen to them, you will understand what their needs are. Then you can just be yourself, â€Evans said. â€œSometimes all we need is someone to listen to us, someone to give us hope. There is a better day, tomorrow will be better.

To find a mobile pantry near you or to learn more about Feeding America West Michigan, visit their website.

Does social distancing undo the bonds that hold society together?