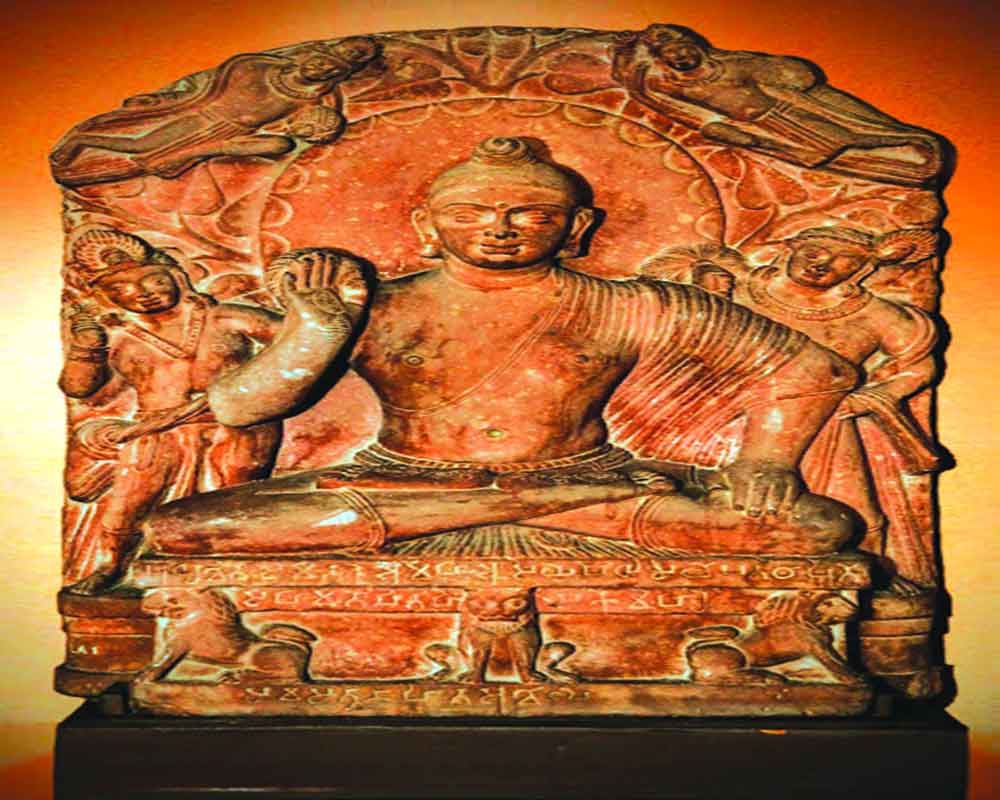 Mathura again in the center of attention

The land of Mathura, where the Shai Idgah and Krishna temple complex stand today, has a long history of conflict between Hindu and Muslim communities, writes Susan Mishra

Mathura – the birthplace and abode of Shri Krishna and one of the Seven Sacred Cities (Sapta Mahapuris) holds immense significance and is of great religious eminence to Hindus. This site of paramount religious importance has been embroiled in controversy centered on the Hindu Muslim contestation for the scared space. The land, where the Shai Idgah and Krishna temple complex stand today, has a long history of conflict between Hindu and Muslim communities. The history of the current 20th century temple dates back to the early 19th century when Mathura came under British rule. The series of events leading up to the construction of the current temple is fascinating. In 1815, the entire land of Katra Keshav Dev measuring 13.37 acres was auctioned off by the British authorities. Raja Patni Mal of Benares was the highest bidder. After his bid was accepted in the auction, he became the owner.

The objection raised by the Muslims against Raja Patni Mal’s ownership and possession of the land of Katra Keshav Dev was dismissed by the Court as well as the administration. More than six decrees were passed between 1875 and 1877 in favor of Rai Narsing Das, the heir of Raja Patni Mal, who owned the complex. Subsequently, a number of cases were filed by Muslims challenging the auction, ownership and possession of Raja Patni Mal, but all were dismissed. Rai Kishan Das brought a civil action in 1928 and the Honorable High Court on Second Appeal 1932 gave judgment on 2.12.1935 said Raja Patni Mal and his heirs as rightful owners of 13.37 acres of land in Katra Keshav Dev . Furthermore, the judgment declared that Muslims had no rights over any part of the said land.

Shri Jugal Kishore Birla had pledged to build a glorious temple at Katra Keshav Dev glorifying the birthplace of Lord Shree Krishna, and for this purpose he had purchased the land of Katra Keshav Dev in the name of the revered Hindu leader Pt. Mahana Mandan Mohan Malvia, Goswami Ganesh Duttji and Bhikhen Lalji Aattrey in 1944. He also decided to establish a trust for the development of the associated lands and the “Shree Krishna Janmbhoomi Trust” came into existence on 21.2.1951.

Mathura’s crucial location and historical and religious significance have invariably led to it being raided and looted on numerous occasions. These attacks also focused on the destruction of the temples of Mathura. The onslaught of the invading armies did not in any way hamper the spirit of the faithful. This sacred Hindu site has emerged victorious on several occasions – each time a temple was destroyed, the faithful worshipers of Shree Krishna built a new one.

The evidence for the first temple in Mathura comes from an inscription known as the Vasu Doorjamb inscription dated to the early 1st century CE. The Sanskrit inscription in Brahmi script was found on a red sandstone temple doorframe thrown into an ancient well in Mathura. The doorframe is approximately 8 feet long, 1.24 feet wide, and 8 inches thick. The inscription is dedicated to the deity Vasudeva clearly indicating Vaishnavite affiliation. The inscription reads, ‘A stone gateway and balustrade have been erected at…the great temple of Bhagavat Vasudeva. May Bhagavat Vasudeva, being pleased, promote (the dominion or life and strength) of svamin mahakshatrapa Sodasa)’. This piece of evidence is significant as it confirms that the tradition of building great temples was in vogue in the Mathura region in a very early period. Another inscription from Mora, 11 kilometers from Mathura, testifies to the early religious importance of the area for the devotees of Vishnu in and around the sacred land of Mathura. It records the construction of a stone temple for the installation of the Pancha Vrishni Viras, by a lady called To?a. This inscription is dated to the 1st century CE and these five heroes (Pancha Vrishni Viras) were identified by JN Bannerjea as Vasudeva, Sa?kar?a?a, Pradyumna, Samba and Aniruddha, who were descendants of the Vrishni family and closely related to each other. Furthermore, the discovery of more than two dozen images of four-armed Vasudeva Krishna from the Kushana period in the 1950s and joint images of Krishna, his brother Balarama and his sister Ekanamsa, all from Mathura between 1 and the 3rd century AD, leave no doubt about the sanctity of Mathura. in the ancient past.

Narratives relating to Shree Krishna’s life are described in the Mahabharata, Bhagavata Purana, Bhagavad Gita and Harivamsha Purana, a later appendix to the Mahabharata with a detailed version of Krishna’s childhood and youth. It also finds mentioned in the Chandogya Upanishad which has been dated to the 8th to 6th century BCE. The question that arises is whether there is any historical evidence regarding the existence of a settlement in Mathura at such an early date? In fact, the excavations carried out in Mathura seem to attest to the literary tradition, as evidenced by the presence of a particular pottery known as Painted Gray Ware (PGW). This pottery is dated between 1200 and 600 BCE and has been found in many sites mentioned in ancient texts – Hastinapur, Mathura, Kurukshetra and Indraprastha. The period roughly corresponds to the later Vedic and Upanishadic periods. The excavations were conducted by ASI in the 1950s with the test trench laid 500 feet north of the superimposed mosque of Aurangzeb. Excavations have revealed that the vast settlement of Mathura can be dated as far back as the 6th century BCE, if not earlier based on PGW finds. The site was occupied until the 2nd century BC. After a brief period of inactivity, it was again occupied from 100 CE to around 6th century CE. It is interesting to note that among the material remains were found a coppersmith’s oven and beads of crystal, agate, carnelian, lapis lazuli and jasper.

This sacred site was plundered in medieval times and the temples were repeatedly desecrated, but each time the sanctity of the site was restored by the construction of a new temple. Mahmud of Ghazni raided and plundered Mahaban, and Al Utbi describes in his Tarikh-i-Yamini the nearby holy city which is identified as Mathura – “In the center of the city there was a huge and magnificent temple, which people believed being ‘t built by men, but by angels.The temples were burnt down, demolished and the idols of gold and silver and the riches plundered and carried away.A stone inscription in Sanskrit reports that in the 12th century , a person named Jajja built a Vishnu temple in Mathura which was described as being brilliantly white and touching the cloud.This temple too suffered destruction in the 16th century CE under Sikander Lodi and this is described by Abdullah in Tarikh- i-Daud. In 1636, with the lavish patronage of Vir Singh Bundela of Orccha, the Keshavaraya temple in Mathura was built in red sandstone and worship at the site was quickly restored. The temple received a Mughal grant in the farmer of Akbar from 159 8, and Prince Dara presented a stone balustrade to this temple in Mathura. The Keshavraya temple was destroyed by order of Aurangzeb. But this did not prevent the continued sanctity of the site as an important center of pilgrimage. Shri Braj Parikrama of Brajnath, suggests a revival of pilgrimage soon after the destruction of Aurangzeb sale. In addition to the highly contested Shahi Idgah, apparently another structure in place of an earlier temple is the Jama Mosque. A Muslim officer under Aurangzeb named Abdul Nabi had destroyed a temple and erected a mosque on its ruins in 1661. According to reports of late 19th century carvings found in a mound near the Gatasram temple in Mathura City, as well as others amply testify to the earlier presence of Vishnu and other temples and Hindu sacred landscape in Mathura.

The interest in tracing the past of Mathura attracted the attention of archaeologists as early as the late 19th century CE. Their exploration and excavations brought to light the presence of Buddhist, Jain and Hindu remains and the existence of the Mathura school of art. Dr Führer, while digging at the back of the Masjid, traced the plinth of an ancient brick substructure which, according to popular belief, marks the ground floor of the sanctuary of the imposing and famous temple. from Keshava visited and described by the French Voyageurs Tavernier (1650) and Bernier (1663). About 50 paces northwest of this bedrock, a test trench has been dug, in the hope of exposing the foundations and some of the carvings of this ancient Keshava temple. Dr Führer mentions that at a depth of 20 feet he came across part of the circular processional path leading around a stupa. On the pavement, consisting of large slabs of red sandstone, a short dedicatory inscription was discovered, according to which this stupa was repaired by King Kushana. In 1853, regular explorations were launched by General Cunningham on the Katra and continued in 1862. They yielded many sculptural remains; the most prominent of these is a 3-foot-tall inscribed standing Buddha image.

The Mathura region is the most heavily

associated with Krishna legend and worship, but between c. 200 BCE and 200 CE, its religious landscape was extremely diverse. Details of finds of carvings and inscriptions in the 19th and early 20th centuries allow us to identify the location of some of the shrines. For example, Katra Mound was the site of an early 2nd century CE Buddhist vihara, the Jamalpur/Jail Mound was the site of a Buddhist settlement, a Naga deity Dadhikarna shrine existed, and a Jaina settlement stood on the Kankali Tila of from the 2nd century BCE.

(The author is a researcher, worked as a project associate and a recipient of the Devangana Desai Senior Fellowship CSMVS Mumbai. She has also co-authored two books)