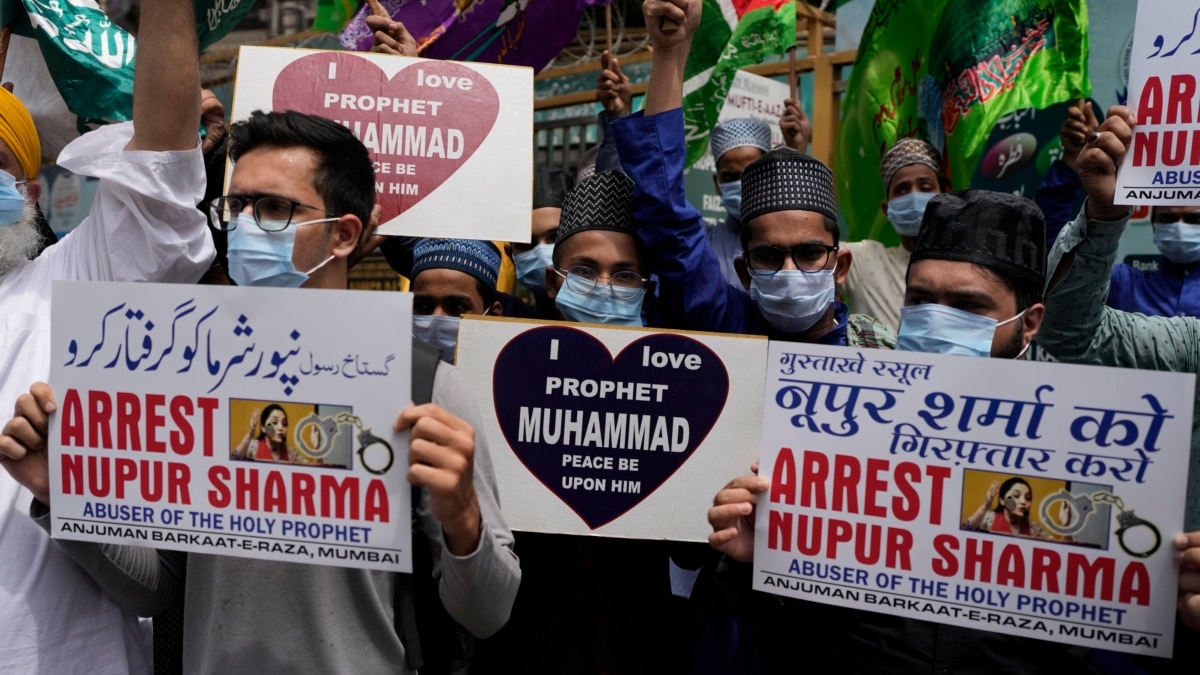 On social networks, some Muslims have called for a boycott of Indian products. And in parts of India, it has also led to protests against Modi’s ruling party.

Increase in violence against Muslims

Over the years, Indian Muslims have often been targeted for things like their food, clothing, and interfaith marriages. Rights groups such as Human Rights Watch and Amnesty International have warned that attacks on Indian Muslims could increase.

Modi’s party denies the charges, but Indian Muslims say attacks on them and their religion have risen sharply.

Anger has been growing since last week after the two BJP officials made comments that were seen as an insult to Islam’s prophet Muhammad and his wife Aisha.

Modi’s party took no action against those responsible until Sunday. It was then that several Arab nations, starting with Qatar and Kuwait, called on their Indian ambassadors to protest. Saudi Arabia and Iran also added their voices to the protest.

The BJP suspended the officials and said it “strongly denounces the insult of any religious figure”. Indian embassies in Qatar and Kuwait issued a statement saying that the views expressed about the Prophet Muhammad and Islam were not those of the Government of India and were made by “fringe elements.”

Qatar’s foreign ministry, however, said it expected a public apology from the Indian government. And Kuwait warned that if the comments went unpunished, India would see “an increase in extremism and hatred”.

The Grand Mufti of Oman called Modi’s party’s action against Islam a form of “war”. And Egypt’s Al-Azhar Mosque, the largest center of religious learning in the Sunni world, called the remarks “genuine terrorism (which) can dip the whole world in serious crises and deadly wars.

Modi’s party also faced the wrath of some of its own supporters, but that was for a different reason. Many Hindu nationalists wrote on social media that the government was bowing to international pressure.

The Organization of Islamic Cooperation (OIC) said in a statement: “These insults come the context of the growing intensity of hatred and insults to Islam in India and the harassment of Muslims. »

The 57-member organization noted the banning of head coverings in classrooms in some Indian states and the destruction of Muslim property as examples of Indian government policy. unfair treatment of Muslims.

More recently, religious tensions have risen after Hindus went to court in the northern city of Varanasi to seek permission to pray at a 17th-century Muslim religious center. They argued that the mosque was built on the ruins of an ancient Hindu temple.

I am Dorothy Gundy.

Hai Do adapted this story for Learn English based on reports from The Associated Press and Reuters.

words in this story

see – nm an opinion or way of thinking about something

the context – nm the situation in which something happens

harassment – nm act of repeatedly attacking or disturbing (someone)