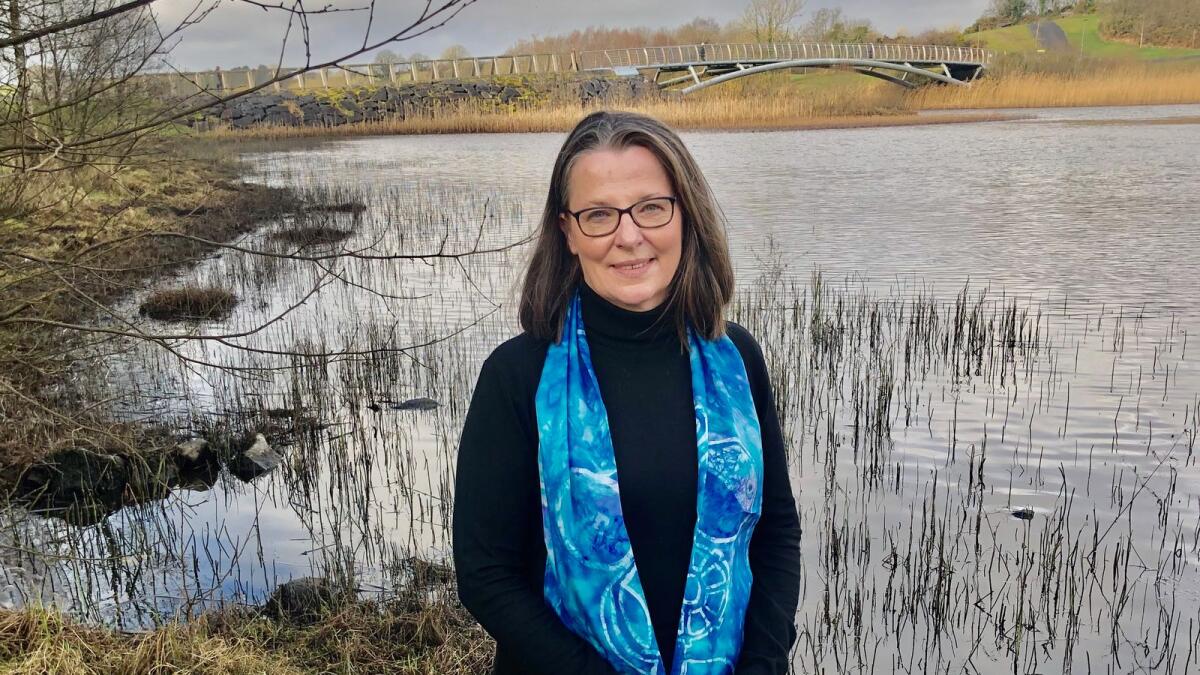 Reverend Gerardine Lennon of Castlebar will serve the West, nationally and internationally, celebrating, commemorating and contemplating cradle-to-grave life milestones for those of all faiths and without religion.

Gerardine was ordained in July as an interfaith minister, part of the One Spirit Interfaith Foundation which was started 40 years ago in America by a rabbi, a Holocaust survivor. Their goal is that no one be excluded or persecuted because of their religious or spiritual beliefs.

Gerardine said: “My life’s journey has been a spiritual search. I work at Lough Lannagh Village in Castlebar (www.loughlannagh.ie) which caters to groups, families and individuals on holiday, for sports bootcamps as well as religious and non-religious conferences and retreats.

“At a retreat, I was encouraged to become an interfaith minister by several guests who said, ‘You’re doing this job anyway.’

“One retreat planner wrote: ‘She understands sacred space and inner healing from within’.”

As a minister, she can arrange baby blessings, ceremonies and rituals, community spiritual ceremonies, funerals, legal marriages, rites of passage and spiritual counseling.

She continued, “The process involves time focusing on your vision for the ceremony. It is a living and evolving process of deep listening, thoughtful feedback and sometimes silence, bringing clarity of thought and focus for you, creating a unique sacred ceremony for you and your witnesses.

“Life stages can also bring up emotional baggage. It’s natural, and I care deeply about providing you with spiritual and psychological support.

“In awakening this, we explore options to bring you peace and reconciliation. This is called the ministry of spiritual accompaniment.

“These services can be offered in the areas of creating rituals, healings and ceremonies, eulogy, birth, marriage, death and life change, reflections and transition preparations. My mission is to be love in action by celebrating, commemorating and contemplating the stages of life with you, honoring your spirituality.

“Sometimes you might have someone talking about something really traumatic related to violence or rape and for some reason people seem to be able to talk here. But there are also happy things, baptisms and all kinds of things.

Gerardine continued: “I wear a stole and what it shows is that we are all cut from the same cloth and everyone is aligned with a particular religion or a particular faith path. But we are all part of the same thing and to me, I call that “love in action”. Some call it the universe, others call it spirituality.

“Some people are really uncomfortable with this language. Some people don’t like that. So for some people their spiritual practice might be to go out into nature. I like to walk on the hills and I like to hear the chirping of birds.

“It is counted as a nature-based path. So when a person says they are not religious or do not align themselves with a fixed church, it does not mean that they are not spiritual.

“I found it quite liberating to hear that and I had a great understanding of the reverence that takes place in different faith paths. But sometimes in our rigidity that is what causes the conflict between them. We would tend to call them our learning assets.

Gerardine and her husband, Paul Lennon, moved to Mayo from Bermuda in the 1990s to take over management of the Lough Lannagh Village resort in Castlebar.

She continued, “I would work with and honor people of all faiths and none. I hadn’t planned to do that but Lough Lannagh is full of things and we take care of the tourists. What I’ve been told is that in a way you and your staff are in a type of ministry here because we’re dealing with people who may be here for joyous events, but they may also to be here for very painful events.

“It may be if they are retired, maybe someone died in hospital. Anyone in the hospitality industry takes care of a lot of things. We wanted to make sure that we nurtured, honored and kept a presence for whatever the person divulged to you.

“We had a seven day retreat here and I decided to do it. There were three interdenominational ministers. During this one person said that I should be an interfaith minister because I was doing that job here anyway.

“I always took care of the guests. We love and accept people as they are. We try not to discriminate. It was a bit tight for me and it resonated because I knew I didn’t want to be a psychotherapist. What was the healthiest way to handle this from my personal point of view, also for our team here and for the guests.

“When I was doing the course, and also with clients who were here, we had a lot of international travelers and a lot of guests who had different faith paths and sometimes they would congregate here.

“This course went into the main paths of faith. It’s not that we’re subject matter experts, but we understand them.

She said another aspect of her work as a minister is spiritual counseling and spiritual accompaniment, adding: “What I tend to say is that when you watch people at work, you always talks about emotional intelligence, but there is also spiritual intelligence and that’s not something. which we necessarily talk about but which is part of all aspects.

“What I learned from the course is really, for me, all I do is ‘am I in love in action here’. As I walk tenderly on this earth, I love in action, I honor and revere you What I have found is that there is so much in common with the paths of faith.

“Another aspect that I didn’t expect was part of the job was doing ceremonies. He was looking at the options for the different types of ceremonies you can have. Some of them may be for deliverance in healing. What I tend to do is help people celebrate, commemorate and contemplate life’s milestones. I honor it based on your belief system. It doesn’t matter what I believe in.

“The only thing I have to do when I do something officially is say I’m an interfaith minister. But I’m not going to evangelize my belief system to you because that can shut people down. I believe in God and I know some people don’t believe that, but I can work with both.

She explained: “From the point of view of my ordination, I am the Reverend Gerardine Lennon but I am not in titles and labels. For me, all people are in a plethora. It is not a hierarchy and the organization I am with is not determined to operate alone. There is an ethic that I have to work on. There is a complaints procedure if they need it.

“To be called a Reverend is that I go through this life with reverence and from ordained work is that you honor the ordinariness of life. It’s very humiliating.

At her first funeral, she said the family wanted no religion. This was at the very last minute, as the person had died on Christmas Day.

She had spoken to them the night before and she was in the crematorium the next day.

“But I have to keep training, so I recently had a child funeral training, which was quite difficult. My ministry is to help people get through a certain stage in their lives.

Reverend Gerardine Lennon can be contacted on (086) 8109587, by email at [email protected] or on her website, www.gerardine.ie.

* Do you have a story to tell about your business? If so, Tom Gillespie would be delighted to hear from you. Contact us at (087) 9680780 or [email protected]