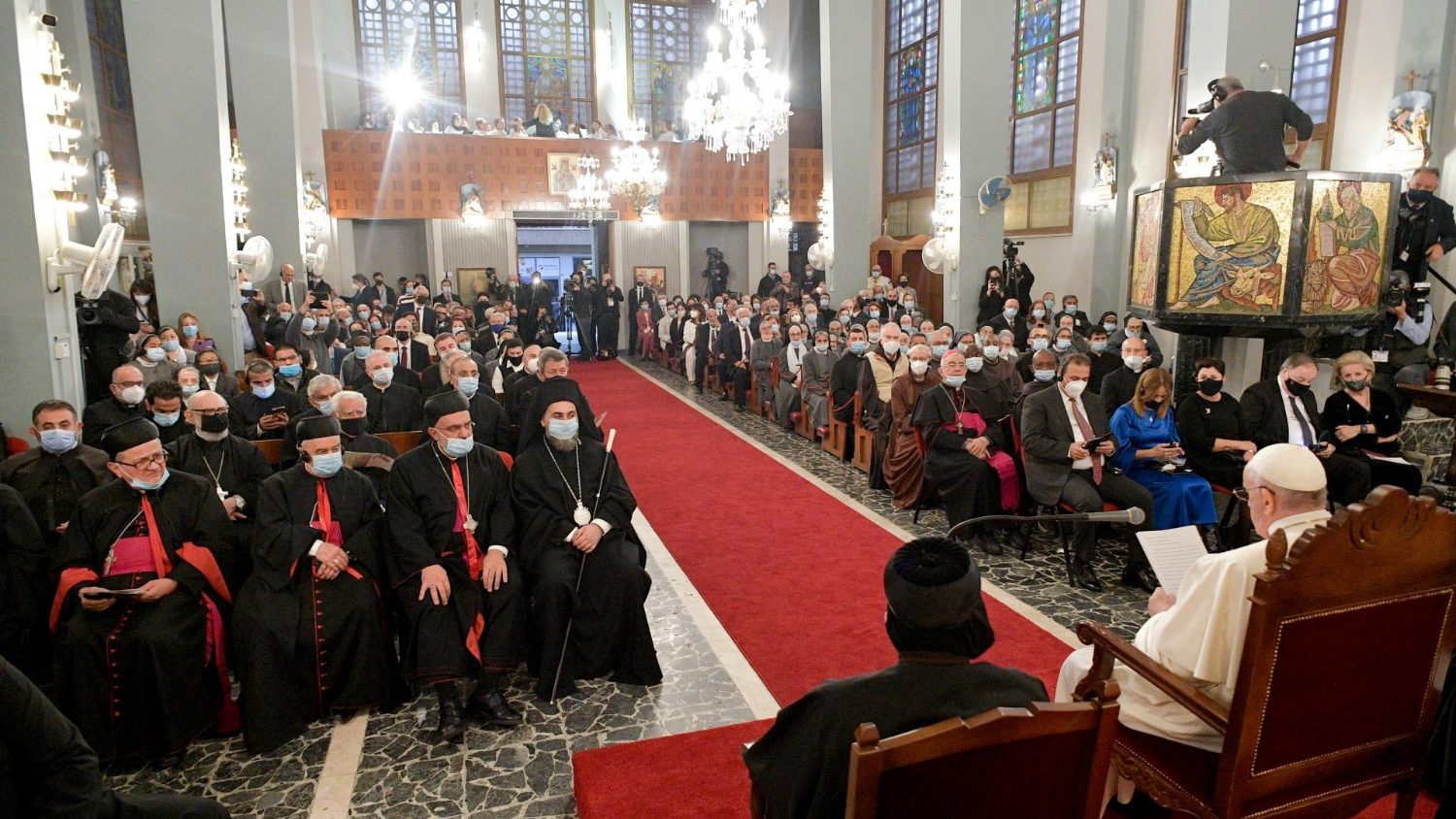 In the first official address of his apostolic visit to Cyprus and Greece, Pope Francis addresses bishops, priests, men and women religious and catechists, urging them to be patient as they move forward in a spirit of brotherhood, forgiveness, mercy and openness. .

By Linda Bordoni
A “patient” church is the one that best suits the Cypriot reality, “a church that does not allow itself to be upset and disturbed by change, but calmly welcomes newness and discerns situations in the light of the Gospel”.

This is the vision and encouragement of Pope Francis for the Catholic clergy, religious and catechists gathered in the Maronite Cathedral of Our Lady of Grace in Nicosia at the start of his apostolic visit to Cyprus.

Addressing the representatives of all the Catholic rites present in Cyprus – the Latin Rite, the Maronites and the Armenian Catholics – the Pope supported the richness of their diversity and urged them to persevere “without getting tired or discouraged”.

Lebanon
Greeting the representatives of the Maronite Church, the Pope expressed his concern for the crises which are currently paralyzing Lebanon: “I am sensitive to the sufferings of a people tired and tried by violence and adversity. I carry in my prayer the desire for peace which rises from the heart of this country.

The patience of Saint Barnabas
Getting to the heart of his message, the Pope reflected on the legacy of the patron saint of Cyprus, Saint Barnabas, who, he said, was a man of faith and wisdom, whose attitude was that of the most great patience: “patience to move forward; the patience to enter the lives of hitherto unknown individuals; the patience to accept what was new without rushing into judgment.

Barnabas, he continued, also had the patience of discernment, the patience to “study” other cultures and traditions, the patience of accompaniment, demonstrated by the way he accompanied newcomers in the faith. by taking them by the hand and dialoguing with them.

The open arms of the Cypriot Church
Pope Francis encouraged those present to continue on this path, welcoming newness and discerning situations in the light of the Gospel.

He supported the work being done on the island which welcomes “new brothers and sisters arriving from other shores of the world”, leaving no one without his loving embrace.

A message for the Church throughout Europe
“It is also an important message for the Church throughout Europe, marked by the crisis of faith. There is no point in being impulsive and tumultuous, nostalgic or quarrelsome; instead, we would do well to move forward, reading the signs of the times as well as the signs of the crisis, ”he said.

He asked them to cultivate a culture of forgiveness and mercy and the ability to have open ears and hearts for different spiritual sensibilities, different ways of expressing faith, different cultures.

The Church, he said, “does not want to reduce everything to uniformity, but to integrate with patience.”

The need for a fraternal Church
Pope Francis then underlined the importance of Barnabas’ meeting with Paul of Tarsus, “an approach of friendship and sharing of life”. He urged those present to pick up on others’ stories, “taking the time to get to know them without labeling them, carrying them on our shoulders when they are tired or injured, as the Good Samaritan did.” It is fraternity, and that’s our second word.

He recalled the time when the two apostles, who had traveled together to evangelize the eastern Mediterranean region, had a disagreement and went their separate ways.

However, the Pope noted, although they had different ideas, there was no grudge between them: “This is what fraternity in the Church means: we can discuss visions, sensibilities and ideas. ‘different ideas.

“We need a fraternal Church”, recalled the Holy Father, “which is an agent of fraternity in our world”, inviting us not to experience diversity as a threat to identity.

Brothers and sisters, all of us!
We are brothers and sisters loved by one Father, said the Pope, noting that the Church of Cyprus is immersed in the Mediterranean, “a sea rich in history, a sea which has been the cradle of many civilizations, a sea from where today many individuals, peoples and cultures from all parts of the world still arrive.

He concluded by urging them to remind everyone, and Europe as a whole, “that we must work together to build a future worthy of humanity, overcome divisions, tear down walls, dream and work for it. unity. We need to welcome and integrate each other, and to walk together as brothers and sisters, all of us!–Vatican News