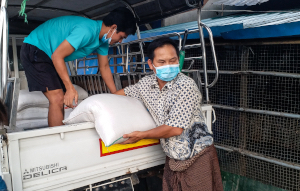 Missionaries in Burma continue to do their best to bring the good news of Jesus in the midst of a “battlefield.”

The country, also known as Myanmar, faced the COVID-19 pandemic and then a bloody coup in early 2021.

A local ministry head Speaking with Mission Network News declares: â€œThe situation is very bad – we are on a battlefield, every day there are killings.

The army took control of the country on February 1. “After this coup, everyone is scared, so we pray – I think everyone prays more than before,” said the head of the ministry. â€œBecause not everyone has a job, no job, no office, nothing, it encourages us to love each other. We are more united, so we share things with our church members. In our church. , when someone has no food, we call and share, we show more Christian love.

Despite the challenges, missionaries do their best to spread the gospel. â€œThey managed to reach a lot of people,â€ the leader said of reaching out to local ethnic groups. â€œThe rest of those who spread the gospel are found mainly in towns and villages. There are pastors who are still on Facebook, still preaching.

The ministry chief tells MNN he was left to check in with worshipers over the phone. â€œI call them on the phone and encourage them, and they look good in their spiritual life,â€ he said. “And in the rural areas they also pray, but I don’t know how they will be – some look stronger than before, they say they pray every day, but other weeks they can become weaker.”

In some areas where the fighting is most intense, villagers have fled into the jungle, including graduates of the ministry’s Bible school.

“This year, the situation has gone from bad to worse because of the military coup,” said the head of the ministry. â€œThe contribution of local churches has been much less over the past three months. Now many of our people have lost their jobs and are displaced. the monthly offers we used to receive have dropped as many of our members struggle to find their daily food. “

Many also fled to India where they contracted COVID-19, then returned and infected others, he said. â€œIn the past two weeks, more than 30 people have died; hundreds of people have contracted the virus, â€he said. â€œIt is an alarming situation. Many of our loved ones in church members get sick.

Churches and other groups are caring for the sick as doctors have joined in civil disobedience. “We have very few medical workers and doctors. We do not have enough oxygen. We are very scared. We pastors go here and there to get oxygen. We cannot lock us up because we have to help some of our members.

Where did death write filmed? Is this a true story? Lifetime Casting Details