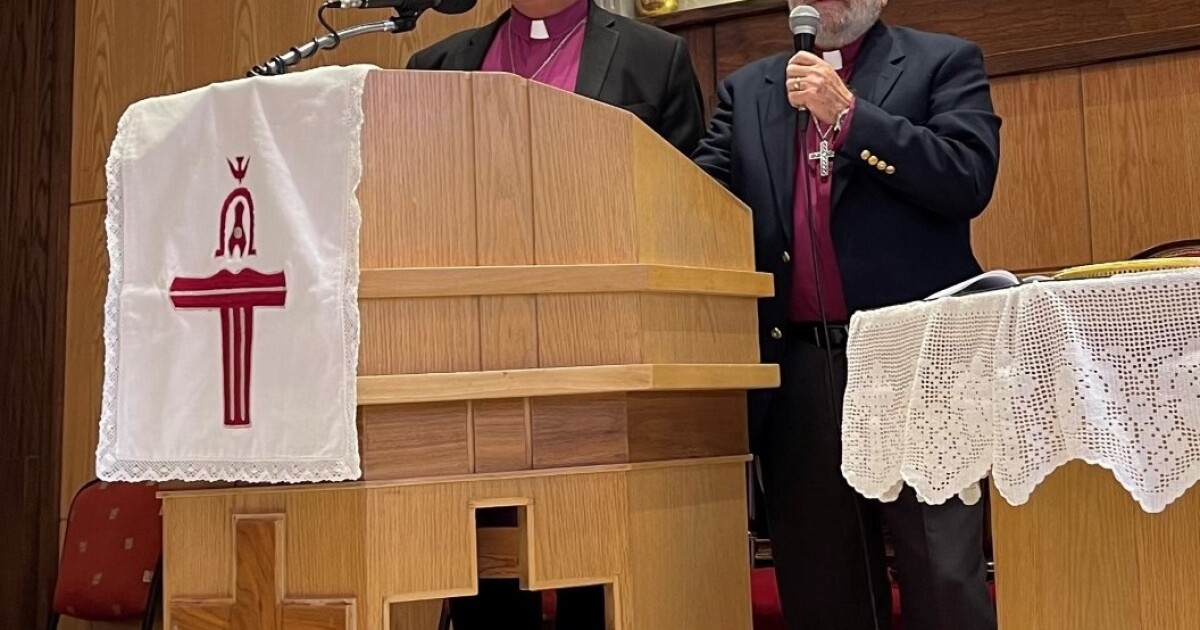 Five years ago, a pastor from North County traveled to the war-torn Middle East to meet people who live there and bring some hope. He heard that they couldn’t get things like Tylenol for their kids and other everyday supplies, so he stuffed his suitcase with these things.
He preached in the basement of a bombed out church in Damascus. The shrine had a hole in the roof left by several mortars.

Since then, the Rev. Jack Baca, senior pastor of the Presbyterian Church in the village of Rancho Santa Fe, has returned to Lebanon and Syria every year (except in 2020), providing encouragement and support on missionary journeys with the Outreach Foundation based in Tennessee.

A few months ago, Baca was back preaching in the same church in Damascus, this time in the shrine, which had been rebuilt with help from the Outreach Foundation and his local church.
The church in Damascus is not far from where Christians believe the apostle Paul met Jesus some 2,000 years ago.

Baca typically travels with a group of around 10 pastors and parishioners from across the country who are part of the Outreach Foundation, which connects Christians in the United States with religious partners around the world.
The foundation includes 350 Presbyterian congregations in the United States that provide spiritual and material support to Christians in 37 countries.
The foundation, for example, helps Syrian refugees by funding churches, schools, dental clinics, vocational training and a retirement home as well as a retirement center.

â€œBy fostering relationships, providing material assistance, and especially traveling and being with others in the midst of their very difficult lives, we are providing ourselves with essential spiritual and physical strength and support,â€ Baca said, Chairman of the Board of Directors of the Outreach Foundation. trustees.

â€œWe pray together, laugh together, cry together and try to help each other,â€ Baca said in a sermon.

During his 14-day trips in May to Lebanon and 17 days in October to Syria, Baca and the outreach team visited various ministries and were welcomed into many homes.

â€œWe are traveling to the Middle East to meet some of our Christian family there,â€ Baca said in a recent presentation on his trip. “Keep taking care of them, keep praying for them, keep doing what you can do.”

Among the ministries they visited was a school for Christian and Muslim children of Syrian refugees in Lebanon, opened by the National Evangelical Synod of Syria and Lebanon. Most of the students live with their families in tents.

The school provides education as well as food, clothing and medicine to the refugees. Classes, including sewing and carpentry for adults and children, take place in reused shipping containers with windows. There is also a dental clinic on site.
The school has purchased supplies including sewing machines with donations from the local Baca congregation and has built a basketball court, which also serves as an open-air auditorium where graduation ceremonies and events take place. other gatherings.

The group visited the Amar al-Hosen Christian retreat center in Syria, which is under construction with support from the village church and will serve as a place where Christians can come together for spiritual healing from the trauma of war, economic ruin, the loss of their home and above all the loss of loved ones. The retreat center is open to everyone – clergy or not, of all faiths – and will help recover from what Baca calls the â€œspiritual PTSDâ€ of war.

In addition to visiting many modern churches, the group visited historic churches and monasteries dating back to the 4th century and met with leaders of historic Orthodox and Catholic churches. They have also met government officials and Muslims in various Syrian cities on previous trips.

Baca traveled to Beirut to meet with members of ministries for refugees and children at risk, such as House of Hope, Blessed School and the Philemon Project in Beirut. He also visited families whose homes were destroyed in the Beirut port explosion on August 4 last year.

â€œNothing replaces being with others in their most vulnerable and difficult times,â€ Baca said.

As part of the outreach, the foundation runs an anti-hunger program that provides seeds and tools as well as agricultural training to help families plant a garden in their backyard to grow food.

â€œWe travel to hug, say a prayer, and express the love of others who may not be able to go on their own,â€ Baca said.
A video on this year’s trips is at villagechurch.org/visit/special-events/report-from-syria-lebanon.