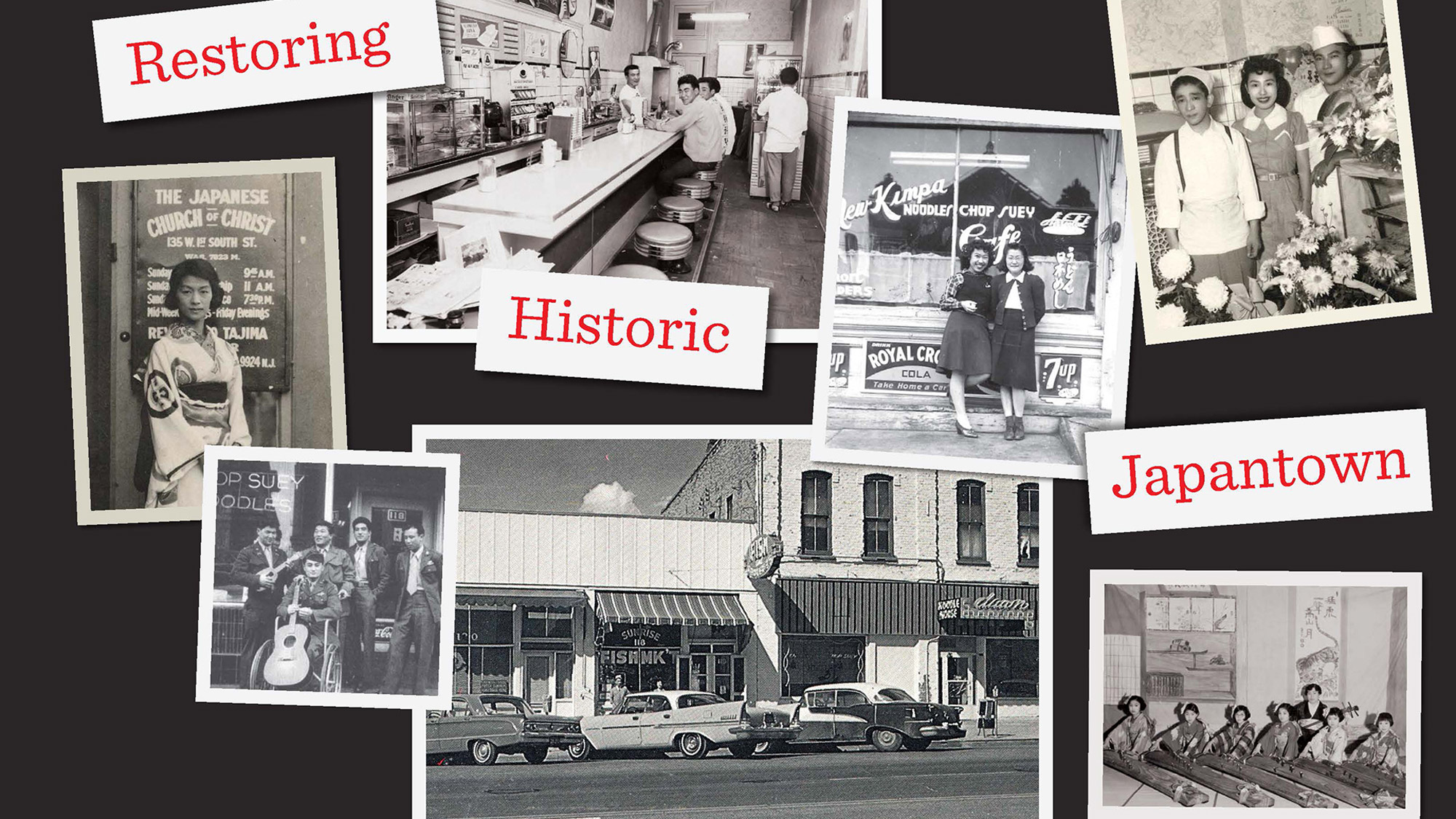 This story originally appeared in University of Utah Journal.

There’s a street in downtown Salt Lake City that serves as an urban archive with generations of stories written in brick and concrete. Near the Salt Palace Convention Center and Vivint Arena, it stretches from Second to Third West on 100 South, surrounded by the Japanese Church of Christ and the Buddhist Temple of Salt Lake, remnants of a once-thriving Japantown chronicling the 100+-year struggle to save celebrated space and preserve its history.

The latest struggle to save this community space began in 2018, when a development dubbed the West Quarter project was proposed that included a frontage on the southwestern part of what had become Japantown Street. The huge multi-purpose high-rise buildings are designed to accommodate commercial and residential space, and they had reserved their dumping, recycling and loading docks for Japantown Street, relegating part of the block to an alley. With state, Salt Lake County, and city participation, the project also included millions of dollars in public funding for a large parking structure.

“For Japanese Americans in Utah, it was a painful, repeating story,” says Jani Iwamoto BS’82, Utah State Senator and former Salt Lake County Board member . Iwamoto was a founding member of the Japanese Community Preservation Committee in the early 2000s and has championed Japantown ever since. A coalition of public, private, and community actors, including Iwamoto and other U alumni you’ll hear about here, worked together to improve the Westside Project and developed plans to revitalize and strengthen Japantown, to looking for ways to honor the history of the neighborhood. while transforming it into a pedestrian-friendly hub for Japan-centric festivals, celebrations and businesses.

Okage Sama From: ‘I am who I am thanks to you’

Japanese immigrants came to Utah primarily as railroad, agricultural, and mining workers in the late 1800s. In 1902, former railroad worker Edward Daigoro Hashimoto started the ED Hashimoto Company near of 100 South as a work agency and to provide food, clothing, and other Japanese items and services sought after by many Japanese residents. Within a decade, more than 2,000 people of Japanese descent had settled in the area. In 1925, the Japanese Church of Christ and the Buddhist Temple were built where they still stand today. Dance studios, two newspapers, a Japanese language school, and other shops, restaurants, and gathering spaces spanned several blocks in what became known as Japantown.

The community changed dramatically during and after World War II. President Franklin Roosevelt signed Executive Order 9066 in 1942, relocating more than 120,000 Japanese Americans from the West Coast to internment camps, including the Topaz War Relocation Center near Delta, Utah. Anti-Japanese sentiment and harassment increased dramatically, only increasing after many displaced people from the West Coast resettled in the Utah community. In the mid-1960s, two central blocks of Japantown were razed to build what would become the Salt Palace arena, and many business owners had to close shop or move to other parts of town. It was part of a wave of urban renewal that gutted neighborhoods across the country, largely targeting communities of color.

“I have heard about Japantown from my parents and their friends all my life. Everyone went – ​​it was thriving – but the Salt Lake arena decimated it,” says Iwamoto. “I’m glad we can move forward, but it’s really important that we honor the past and the people who came before us and created Japantown.”

Iwamoto recalls attending a family friend’s funeral in Japantown and seeing the evidence of encroachment and disregard. “Semi-trailers were in the middle of the road, and crates were scattered blocking everything,” she notes. “It’s not that our community is against development, but we’ve never been part of the discussion, and it still affects us negatively.”

Over the next few years, the community continued to defend their space. The expansion of the Salt Palace in 1996 and the early 2000s prompted Iwamoto, Third District Court Judge Raymond Uno BS’55 JD’58 MSW’63, and others to form the Salt Preservation Committee Japanese community (JCPC). They led a coalition to mitigate negative impacts – including building gates to hide loading docks and a Japanese garden as a safety buffer for increased tractor-trailer traffic – and officially named this section of First South “Japantown Street”. However, the expansion made its mark.

As Iwamoto and others contemplate the future of this important community space, they are guided by the Japanese saying Okage-sama fromWhere “I am who I am thanks to you. This fundamental principle has guided efforts to create a space of memory and respect that thrives over time and is a place of inclusion.

More seats at the table

When the JCPC first heard about the West End development plans, it raised its concerns with the Salt Lake City Redevelopment Agency (RDA), a city organization that boosts investment in projects to to meet the unique needs of the diverse neighborhoods of Salt Lake City. The RDA funded and managed an extensive facilitation process to determine what could be done to mitigate project impacts and improve Japantown Street.

“The practice of urban renewal in the 1960s was a dark period in our history,” says Piazza. “For this project, it was so important to create a place at the table for traditionally excluded voices.”

After five months, all parties engaged in so-called good neighbor agreements, adjusting plans to improve the design of the project and respect the cultural activities and history of the street. Additionally, the RDA has put forward $100,000 and launched a Japantown Vision Process in partnership with the Japanese-American community to address a series of priorities, implementation, maintenance cost estimates and best practices for future management, and signed the Salt Lake City-based GSBS. Architects as design consultant.

For Valerie Nagasawa BS’90 BS’91 MAR’93, a principal at GSBS Architects who worked on the redesign, the project was more than a job. Her husband’s family owned the Sunrise Fish Market, a staple of the Japantown community that was demolished to make way for the Salt Palace.

“Most Utahns are so out of touch with this story. The street wasn’t even called Japantown Street until 2007,” says Nagasawa. “It took endurance and determination to retain even a remnant of the streets, churches and festivals.”

In partnership with the RDA, GSBS planned a 15-month community engagement process by organizing events and holding regular meetings with the Japantown Steering Committee, consisting of Iwamoto, Judge Uno and the former director of Salt Lake County Planning and Development, Rolen Yoshinaga. The Steering Committee represented a larger committee of nearly 30 Japanese American community members who helped develop a set of guiding principles for GSBS to follow in articulating a design concept for the street.

“It was a turning point when a member of the community shared the phrase Okage-sama fromNagasawa explains. “It was a way to celebrate what the pioneers of Japantown did to build community. But they didn’t just want a historical exhibit, they had younger generations in mind.

The community and GSBS were inspired by the smells, colors, textures and other aspects of Japanese design and celebration. The street will feature art and place-making elements such as cherry trees, origami sculptures, interpretive signs and pavement markings that reflect traditional Japanese motifs. The street will be optimized to accommodate seasonal festivals and events and enrich the pedestrian experience. And GSBS Architects has done extensive research on other successful Japantowns in Denver, San Jose and San Francisco to understand how they are financed and managed.

As the Japantown Steering Committee presents the plan to the entire community, the revitalization will be done in stages, rather than waiting to raise all public and private funds for the project.

Bigger than a passage

Community design means not only considering the needs of today, but also what will best serve future generations, says U College of Architecture + Planning Dean Keith Diaz Moore. “Our college is the first in the country to adopt an ‘ethic of care’ that emphasizes responsibility to learn and respect the health and culture of our communities, sustainability standards and innovation. It’s so rewarding to see our graduates taking positive action in the community,” notes Moore.

Some of the project’s challenges include accounting for historic churches and other existing buildings, all with the rear of the Salt Palace abutting one end of the street, says County Board Member Darin Mano BA’08 BS’08 Salt Lake. Since 2013, he’s been the master of ceremonies for the Nihon Matsuri Japan Festival, one of Japantown’s biggest celebrations, and he has a unique perspective as an architect who grew up in the local Japanese-American community.

The community, architects and other partners are ready to take up the challenge. “There are streets that you cross, and there are some that are a destination in themselves,” notes Mano. “Japantown Street should be a destination.”

For Iwamoto, the Japantown revitalization project is just one way to honor Japanese Americans in Utah. During this year’s legislative session, Iwamoto sponsored a bill making February 19 an official day of remembrance on the anniversary of Executive Order 9066, a gross violation of civil rights for the tens of thousands of Japanese Americans who were forced into internment camps.

“Seeing the rise in anti-Asian hatred, thinking about the discrimination my parents faced, it’s so important that we remember the past, even when it’s not comfortable,” remarks Iwamoto. “Unfortunately, history repeats itself, and that’s why we keep these stories alive. I hope we can rebuild Japantown, and that our whole state can celebrate and remember it.

UN positions on Israel are not gospel. Why do Christians cite them?