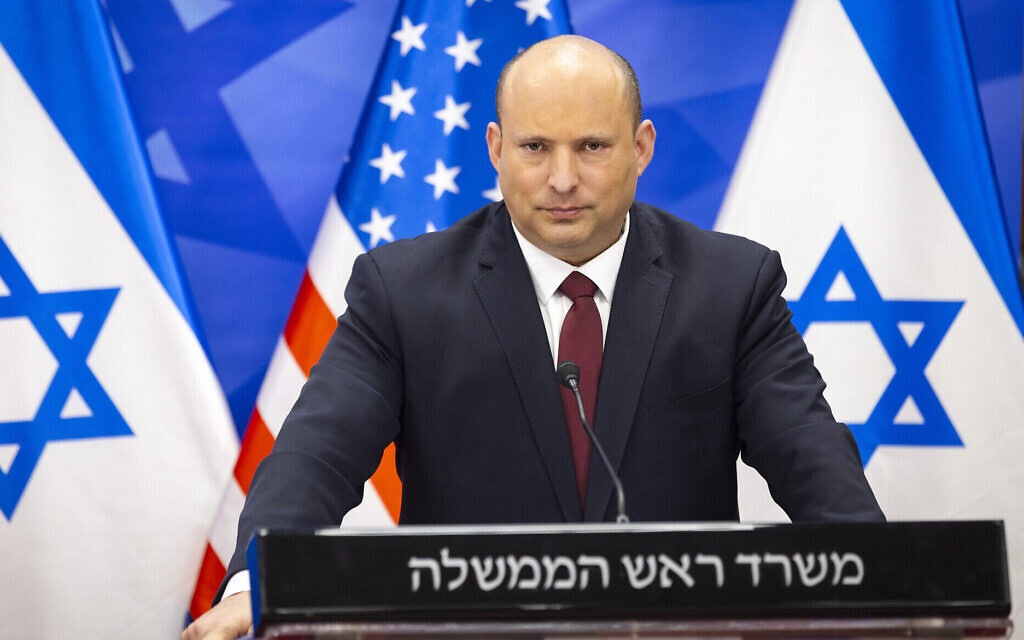 Prime Minister Naftali Bennett lambasted by settler leaders and right-wing MPs on Sunday after using the term “West Bank” in a meeting with US Secretary of State Antony Blinken, rather than the region’s biblical name, “Judea and Samaria”.

In a press conference with Blinken ahead of the Negev summit, Bennett said his government was “working very hard to improve the lives of Palestinians in the West Bank and Gaza.”

“Another moral failing of the government,” said Yigal Dilmoni, CEO of the Yesha Council settlement coordination group, which Bennett himself chaired from 2010 to 2012 before running for office.

“Such an expression is another sign of the moral decline of this government. This is in addition to freezing settlement building and turning your back on them. A government like this should go home,” he said.

MP Ofir Sofer of the far-right Religious Zionism party said that “it is not surprising that such an expression comes from a person who aligns himself with the supporters of terrorism and the anti-Zionists”. He was apparently referring to the Islamist Ra’am party, which is part of Bennett’s government.

Critics also came from MP Amichai Chikli, a renegade member of Bennett’s own Yamina party, which said “it is not surprising that such terminology is used by a man who formed a leftist government with Meretz and the Islamist movement”, also referring to Ra am.

In 2018, Bennett himself criticized his now partner in government, Foreign Secretary Yair Lapid, when the latter used the term “West Bank”.

“It’s a phrase that was not invented by the Zionists,” Bennett said then. “Is the Jordan Valley an offshoot of [the Jordanian capital of] Amman? This is Judea and Samaria, this is the Land of Israel. We will continue to tell the truth, we will never disguise ourselves.

Bennett’s office downplayed his use of the term, saying in a statement that “generally, the Prime Minister uses the term ‘Judea and Samaria’ in both Hebrew and English. It was an accidental remark and no special meaning should be attached to it.

The right also criticized Blinken for comments he made at the press conference, during which he cited the need to “prevent actions from all sides that could increase tensions, including “the ‘settlement expansion’ and ‘settler violence’.

If so, we have a request.

Every day, our journalists aim to keep you up to date with the most important developments that deserve your attention. Millions of people rely on ToI for fast, fair and free coverage of Israel and the Jewish world.

We care about Israel – and we know you do too. So today we have a question: show your appreciation for our work by join the Times of Israel communityan exclusive group for readers like you who appreciate and financially support our work.

You are a dedicated reader

We’re really glad you read X Articles from The Times of Israel over the past month.

That’s why we started The Times of Israel ten years ago – to provide discerning readers like you with must-read coverage of Israel and the Jewish world.

So now we have a request. Unlike other media, we don’t have a paywall in place. But since the journalism we do is expensive, we invite readers to whom The Times of Israel has become important to help support our work by joining The Times of Israel community.

For just $6 a month, you can help support our quality journalism while benefiting from The Times of Israel WITHOUT ADVERTISINGas well as access Exclusive content only available to members of the Times of Israel community.

Thank you,
David Horovitz, founding editor of The Times of Israel