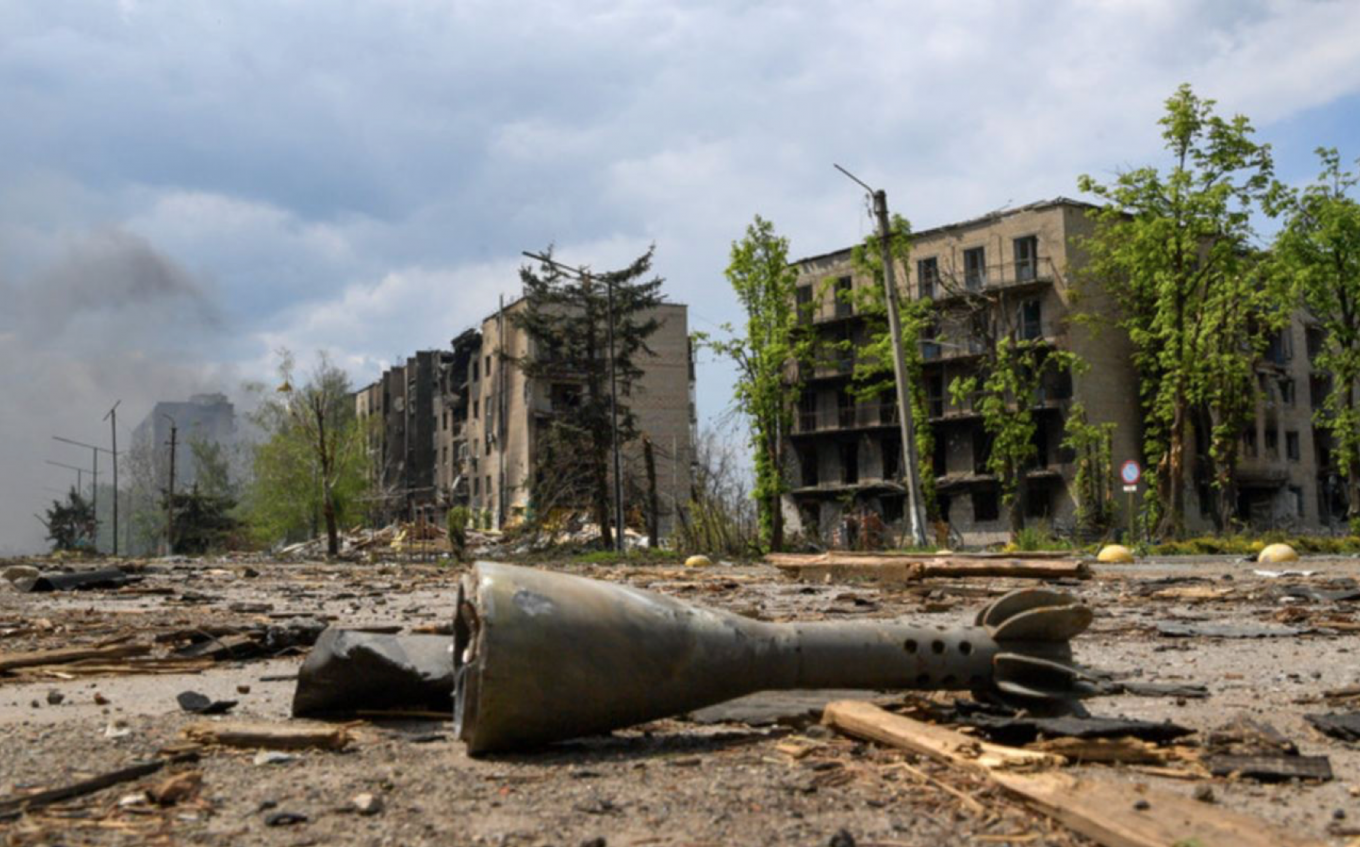 The battle for control of Ukraine’s Donbass region raged on Sunday as Russian forces tightened their grip around the key towns of Severodonetsk and Lysychansk.

The situation in Lysychansk had “significantly worsened”, regional governor of the Lugansk region, Sergiy Gaiday, said on the Telegram messaging service.

“A Russian shell fell on a residential building, a girl died and four people were hospitalized,” he said.

Meanwhile, on the eastern bank of the Donets River, Russian forces “carried out assault operations in the sector of the city of Severodonetsk”, according to the Ukrainian General Staff.

The fighting was progressing street by street in the city, Gaiday said.

The two European leaders also “insisted on an immediate ceasefire and a withdrawal of Russian troops” during an 80-minute phone call with the Russian leader on Saturday, the German chancellery said.

Since failing to capture the capital Kyiv at the start of the war, Russia has focused on the eastern Donbas region as it tries to consolidate areas under its control.

“The situation is very difficult, especially in the Donbass and Kharkiv regions, where the Russian military is trying to achieve at least one result for itself,” Zelensky said in his daily address to the nation on Saturday evening.

Earlier, the Russian Defense Ministry said that “the town of Krasny Liman (Moscow’s name for Lyman) has been completely liberated from Ukrainian nationalists.”

Lyman is on the road to Kramatorsk and Severodonetsk, which is “now surrounded”, according to a Lugansk provincial police official quoted by Russian state media.

But Governor Gaiday insisted that “Severodonetsk has not been cut.

“There is always the possibility of delivering humanitarian aid,” he told Ukrainian television.

In Severodonetsk, where around 15,000 civilians live, a local official said “constant shelling” was making it increasingly difficult to enter and exit.

“Evacuation is very dangerous, these are isolated cases when we manage to get people out. Now the priority is the injured and people who need serious medical assistance,” said Oleksandr Stryuk, head of the military and civil administration of the city.

The water supply was also increasingly unstable, as the lack of electricity meant that the city’s well pumps were no longer working, he said.

Residents went more than two weeks without a cellphone connection, he added.

Governor Gaiday said the only road link to the outside world must be at the center of continued Russian attacks.

“The next week will be very difficult, because Russia is putting all its resources into seizing Severodonetsk, or cutting off the (region) from all communication with Ukraine,” he said.

In their call with Putin, Scholz and Macron pointed to a looming global food security crisis.

In addition to capturing key ports such as Mariupol, Russia used its warships to cut off other cities still in Ukrainian hands, thus preventing the transport of grain.

Russia and Ukraine supply around 30% of the wheat traded on world markets.

Russia has tightened its own exports and Ukraine has large quantities blocked, driving up prices and reducing availability worldwide.

But on Saturday, he told Macron and Scholz that Russia was “ready” to look for ways to allow more wheat into the world market.

“Russia is ready to help find options for the unhindered export of grain, including the export of Ukrainian grain from Black Sea ports,” the Kremlin quoted the minister as saying.

He also called for the lifting of sanctions to allow “an increase in the supply of Russian fertilizers and agricultural products” on the world market.

Zelensky will talk to the EU

Zelensky’s urgent pleas for more advanced weapons from Ukraine’s western allies appear to be bearing fruit, with Washington agreeing to send advanced long-range rocket systems, according to US media.

Pentagon spokesman John Kirby did not confirm delivery plans for the M270 multiple-launch rocket system, a highly mobile piece of equipment capable of firing up to 300 kilometers (186 miles) which Kyiv said it had cruelly need.

But he said Washington was “always committed to helping them succeed on the battlefield.”

Putin warned Macron and Scholz that increasing arms deliveries to Ukraine would be “dangerous” and risk “further destabilization”.

On Sunday, the Russian Defense Ministry said it destroyed a Ukrainian Armed Forces arsenal in the southeastern city of Kryvyi Rih with “long-range high-precision missiles”.

Russian forces also targeted a Ukrainian air defense system near Mykolaivka in the Donetsk region, as well as a radar station near Kharkiv and five ammunition depots, including one near Severodonetsk.

As Zelensky seeks to increase international pressure on Moscow, he will address European leaders at an emergency summit on Monday over a Russian oil embargo.

The deal is blocked by Hungary, whose Prime Minister Viktor Orban has close ties with Putin.