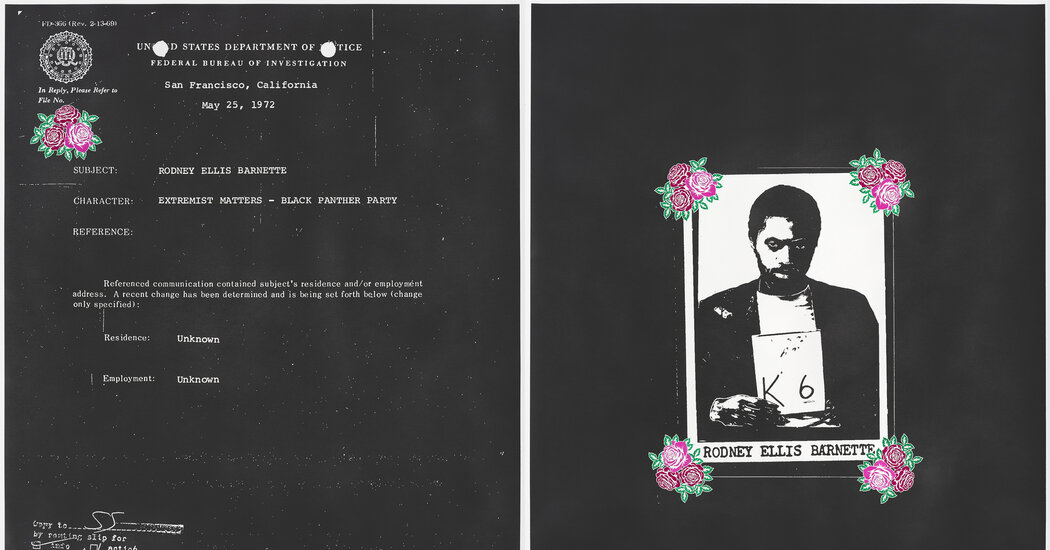 Sadie Barnette Recovering from her father’s past

Can you describe what goes on at work? It is made up of two pages from the 500-page surveillance file the FBI amassed on my father, Rodney Barnette, who in 1968 founded the Compton Chapter of the Black Panther Party. My family filed a FOIA application in 2011 and about five years later we finally received the file.

The dossier is at once chilling, moving, disturbing and violent. Surveillance sometimes looks like a harmless information gathering process, but it often involves harassment, intimidation and agent provocateurs. In 1969, because of his political activism, my father was fired from his job at the post office. My first reaction to these documents was: first, it’s terrifying, and second, I’m lucky my dad lived and I’m lucky that I am living. I thought, how can I get this material back? How can I underline my father and our family history, which is the history of so many other families in this country? So the work is certainly about reclamation and repair to some extent, but it does not intend to repair the evil per se. It is more of a repair trip. Or reparation as a practice, meditation.

I created a giant stencil, a machine cut it out, then put it on paper and applied graphite to the surface. The result looks like a carbon copy. There is a ghostly element in the white-on-black text. I always pay attention to interacting with the source material, but not competing with it – or altering factual information.

At 4 by 5 feet, the diptych is quite large. I really wanted him to confront you on a human scale. The first panel shows a page dated May 25, 1972. It’s from a time when the FBI essentially lost my father. I love this slippery moment of the unknown. The page reads “residence unknown” and “employment unknown”. The agency later found her address because it monitored subscriptions to “The People’s World”, the Communist newspaper.

The second panel is a passport photo, which almost looks like a silkscreened political poster, as the photograph has been photocopied and re-photocopied so many times. I was thinking about how ID photos instantly criminalize and dehumanize someone, how they make them a number. I imagined this photo on hundreds of FBI offices, and how, to his agents, my father was a expendable person, an “extremist.” My experience was: if I draw this image by hand, by a certain alchemy of love and work, can I transform it into something else? Can I paint a portrait of a father who dares to imagine a new world? It was really rewarding to draw the roses in colored pencil. The colors stand out against the graphite in a way that makes the flowers look like stickers. I was thinking of domestic spaces and healing rituals, how we give each other flowers to say â€œI love youâ€ or at funerals to mourn and commemorate loved ones.

Why is Christianity on its way to becoming a minority religion in the UK?