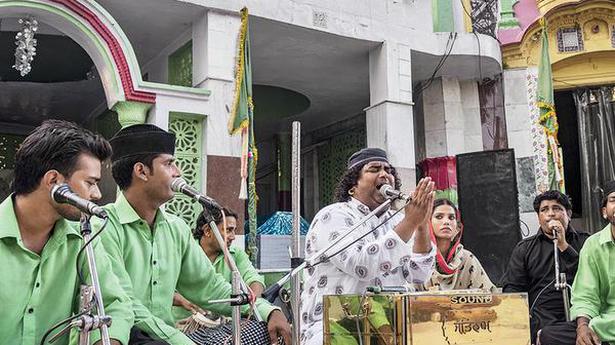 Electric, fiery and serious are some of the adjectives we like to associate with a qawwali performance. Can these emotions be captured through static images? An ongoing photo exhibition at the India International Center in Delhi showcases the times when qawwals become the voice of the hundreds of devotees who crowd into the shrine in search of grace. Capturing artists at traditional performance sites is a reminder of how deep and deep the words we relate to this art form.

Conceptualized by Kathak representative Manjari Chaturvedi, who has done extensive research on Sufi music as part of her ten-year-old Qawwali project, the images capture practitioners with their families, in their daily lives and in their interactions with the public.

Manjari describes the project as the very first photographic documentation of this declining art form. â€œThe qawwals of the subcontinent have largely remained faceless. Of course, people associate with their names and the music, but not with the faces of the artists. This is what led to the launch of this project, to show the real faces behind this music, â€explains Manjari.

Manjari hired three great photographers – Dinesh Khanna, Leena Kejriwal and Mustafa Quraishi – who bring an outside perspective to the art form that migrated to India from Central Asia but, as Manjari puts it, was imbued with the colors of Indian diversity in many ways. of one.

The images reflect how, over the years, musical instruments have become an integral part of qawwali, attracting audiences from a cross section of society. Qawwali appeals not only to the haves who throng Nizamuddin Dargah, but also those who live on the fringes of shrines across the country. As a result, the deep thoughts of the songs are expressed in the language of the common man, be it Lakhnavi or Urdu Dakkhani, Punjabi or Awadhi. commercial environment.

While carrying out the project, Dinesh says he discovered that there is a lot more qawwali than he had seen in film and popular culture. â€œThis brought me to my roots in Punjab, where most mazars (the tombs) are frequented by Sikhs and Bulleh Shahs kalam (the verses) in Punjabi find their way perfectly into qawwali. In fact, one of his most enduring images is that of Ustad Ranjhan Ali performing at the shrine of Baba Hussain Shah Qadri in the town of Raja Sansi in Amritsar, where the temple bells could be seen in the background. .

Leena recounts the first qawwali she covered at Nizamuddin Dargah and how “the beautiful mahaul (atmosphere) and energy â€inspired her as a photographer. â€œI realized that I didn’t want my images to be too static. The air is loaded, especially during the Urs (anniversary of the death of a Sufi saint) â€, explains Leena, known for her flagship work,â€œ Calcutta: reclaiming the city â€.

Dinesh, who is the co-founder of the Delhi Photo Festival, admits he still hasn’t found an answer to how such an energetic art form can be turned into a static image, but notes that instead of a photo, it should be observed as a series of images forming a photo report.

Khanna said he was aware that he was documenting â€œsomeone else’s artâ€ and therefore, while bringing his experiences, he should not â€œimpose his supposed art on itâ€.

Female performers are traditionally kept away from qawwali, and Manjari cites the legend of Dhai (two and a half) Qalandar involving three Sufi saints – Hazrat Lal Shahbaz, Hazrat Bu Ali Sharfuddin and Hazrat Rabia Basri. â€œMale saints constitute two Qalandars, while Rabia constitutes only half because of his gender. It is therefore important to document the work of women artists, who break down barriers to perform qawwali. “

Leena brings out this aspect through her vibrant images. She followed Chanchal Bharti to Muzaffarpur in Bihar. â€œIt took me to a part of the world that I wouldn’t have visited otherwise. When I got there his qawwali started late at night. It gave me plenty of time to hang out and feel the atmosphere. It was a shrine visited by people of different religions. The devotion with which the qawwal and the listeners immersed themselves in the music was fascinating. In another case, one morning, Leena photographed young girls, with scarves around their necks and wearing lipstick, performing at Hazrat Inayat Khan Dargah in New Delhi. â€œExcited, I captured them on my camera before and after the performance. It was a great experience.

Technology, as Manjari says, sometimes dehumanizes music, makes us forget the artist and only retain sound. This exhibition has removed some of the anonymity that surrounds Qawwali singers.

(The Qawwali Photo Project is on display at the India International Center, New Delhi, until November 28.)

“A Tale for the Time Being” appears in Persian