In one video, several women, each sporting an impressive hairstyle, sit neatly on mattresses, seemingly in meditation, their oversized halo-shaped outlines projected into the background.

Douyin announced on September 23 his decision to crack down on fraudulent marketing behavior involving foyuan, with many suspended or canceled accounts.

Foyuan is a fairly new term, with for literally referring to “Buddha”, while yuan is a formal term for a beautiful woman. Thereby foyuan are stylish women who have become online celebrities by posting pictures or videos featuring them in a “devotional” activity, often in temple grounds.

With a little imagination, such scenes of piety are exploited to fake public figures who become ideal objects for digital marketing.

In one video, several women, each sporting an impressive hairstyle, sit neatly on mattresses, seemingly in meditation, their oversized halo-shaped outlines projected into the background. 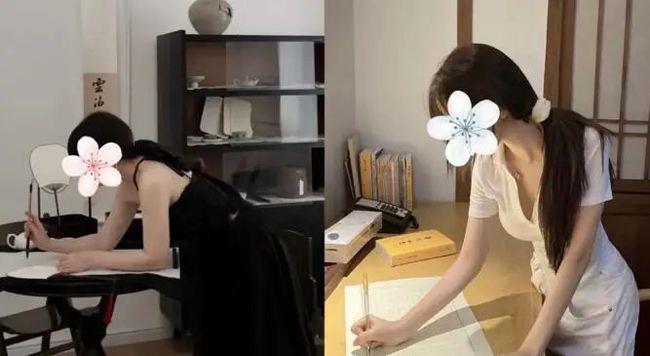 In another clip, a “devout” woman is copying Buddhist scriptures.

In another clip, a “devout” woman is copying Buddhist scriptures, and the physical movement involved in wielding the brush showcases her natural gifts.

Another young woman walks through the temple, holding an antiquated umbrella, a period piece worthy of a television series featuring the infighting of the imperial court.

Other scenarios show these women enjoying tea or burning incense.

In all these pious false scenarios, the object of consecration has shifted from the Buddha to these elegantly dressed actresses, their flowing braids, their disguises or their seductive silhouettes.

In this age where data algorithms are the paramount measure of business success, nothing is too sacred to be exploited by unscrupulous marketers.

Apparent devotees are not only devoid of genuine religious sentiments, but also lack basic respect for etiquette and dress code in a temple. According to state regulations, any business activity conducted in the name of religion is strictly prohibited.

These heavily scripted and edited scenes clearly suggest how easily these women bow down to Mammon’s altar.

Thanks to the latest cleaning efforts, when you enter “for the yuan“In Douyin’s search engine, the results are an injunction:” Be your true self, gain the lasting affection of people. Say no to the fake public figure and unscrupulous marketing. “