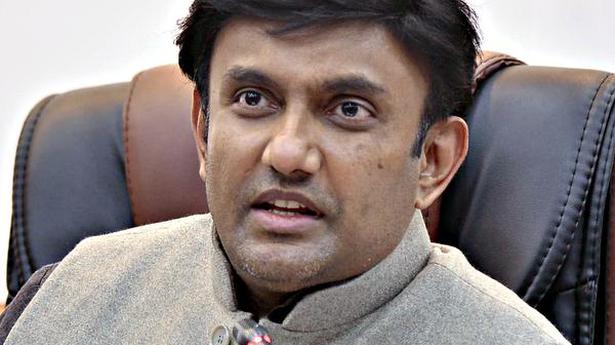 WHO Chief Scientist Soumya Swaminathan recently said India may become endemic. If there is no new variant, it may be the case, says the minister

The opposition Congress has alleged corruption in the state government’s purchase of COVID-19 equipment during the pandemic. Recently, the state legislature’s Public Accounts Committee (PAC) identified several shortcomings in purchasing COVID-19 material, resulting in additional spending worth several crores. However, in an interview with The Hindu, Health and Medical Education Minister K. Sudhakar said the PAC accusations are “politically motivated” and the PAC has only “dug a hill and found a rat”.

The state legislature’s PAC identified shortcomings in the bidding process and procurement of COVID-19 material during Wave 2. He said this resulted in additional expenses worth several crores.

This is totally wrong. The conclusions of the PAC are politically motivated. Targeting and criticizing the government over handling COVID-19 has become a habit with the opposition Congress. There is no better supply system than the one we have followed.

In addition, purchases are made through the Karnataka State Drug Logistics and Storage Company and are overseen by senior officials at the level of the Additional Chief Secretary (ACS). I am not one of them and no file is reaching me. PAC questions were answered by our officials. That the committee deal with it legally instead of making noise in the media.

The third wave was to hit Karnataka in September-October. However, we did not see an increase even after the Ganesha festival. Some experts now speak of endemicity. Is Karnataka close to that?

It is difficult to predict the behavior of a pandemic. There are different models to predict the onset of waves but their success rates are low. However, we know that pandemics are subject to several waves. Many western countries have already experienced third and fourth waves. India may or may not witness a third wave. WHO Chief Scientist Soumya Swaminathan recently said India may become endemic. If there is no new variant, it may be.

Karnataka was caught off guard when the second wave hit. How prepared are we now, in the event of a third wave, now that most public places are open?

You said the state is determined to vaccinate the entire adult population of 4.97 crore by the end of December. With a gap between two doses of Covishield still 84 days, is it possible to meet this deadline? We have almost 25% who have not yet received the first dose.

Karnataka achieved 80% first dose coverage as of September 29. It can reach 85% over the next 8-10 days. Many people will also take Covaxin which has an interval of 4 to 6 weeks. With this, I am convinced that we will be able to vaccinate almost 100% by December.

There are several allegations of underreporting of deaths from COVID-19 in the state. Are our reports transparent?

Historically, the registration of deaths in our country has been poor. In 2011, only 66% of deaths were registered with the civil status system (CRS). The number of deaths recorded with CRS has increased dramatically before and during COVID-19. We must not look at 2020 in isolation. I affirm that our government has recorded all deaths during COVID-19.

Nigeria at 61: time for introspection