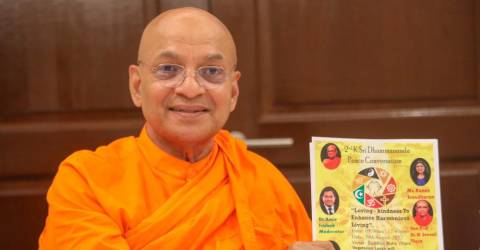 “We have several activities planned for the two days. Among them is the chanting of sutras – a retelling of discourses delivered by the Buddha in the Pali language for the blessing and protection of devotees.

“BMV sutra chanting was first introduced in 1965 to protect the king and other rulers of various states to govern the country and its people in a fair, just and equitable manner.

“We have also extended the same to the Prime Minister, Cabinet members and state governments to manage the country and the states with wisdom, compassion and understanding,” he said.

Other planned activities are screening for glaucoma and other eye diseases by the Lions Eye Clinic to provide quality and affordable eye care and cataract surgery to attendees on both days.

There will also be a Maha Sanghika Dana (Merit Offering Ceremony) to commemorate Sangha members who have served BMV.

Members of Theravada, Mahayana and Vajrayana Buddhist sects will also be invited to participate in the event.

“Why no apartments and amenities for us, Mr. Modi?” : Pakistani Hindu refugees