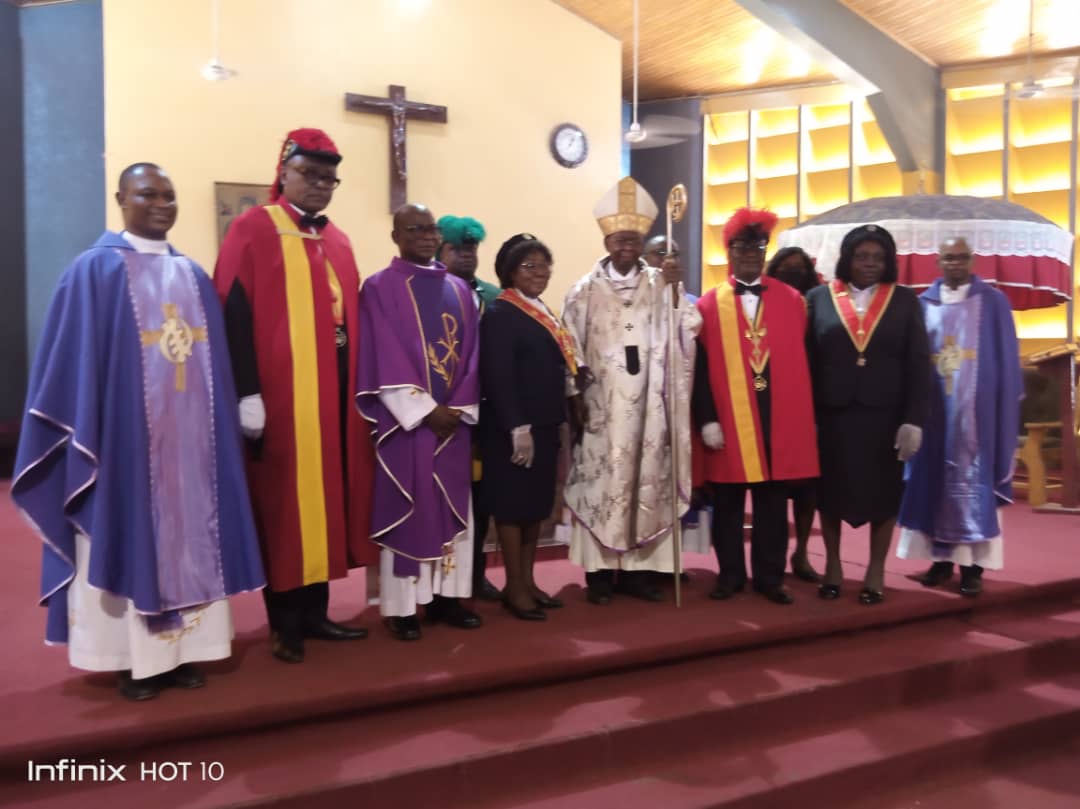 The President of the Ghana Catholic Bishops’ Conference and Metropolitan Archbishop of Tamale, Bishop Philip Naameh, has lamented the 3% drop in adherence to the Catholic faith according to the 2020 Population and Housing Census.

He said that percentage has shifted into Pentecostal and Charismatic churches.

Rev. Naameh therefore commissioned the Noble Order of Knights and Dames of Marshall, a Catholic fraternal society, to assume the role of catechists in imparting the faith to members.

He said this during the launch of the 50th anniversary (golden jubilee) of the Noble Order of Knights and Dames of Marshal in the Ecclesiastical Province of Tamale (TEP) at the Cathedral of Our Lady of the Annunciation in the region of North.

The Archbishop noted that the same census exercise produced interesting context and figures with the percentage of Christians in Ghana still at seventy one percent (71%) among others.

“I would like to draw your attention to the population census which has just been completed. If you look at the numbers and the analysis in some context, it’s very interesting.

“The number of Christians remained the same at 71% but the Catholic Church lost 3% and we (Ghana Catholic Bishops’ Conference) want to believe that this 3% went to the Pentecostal churches and not paganism nor paganism. Islam,” Archbishop Naameh noted.

According to him, Islam has also increased, “but theirs is due to natural numbers because for every child a Catholic has, his counterpart in the Muslim faith has three to four children.

“Because for them it is a missionary substitute to have as many Muslims as possible and it is also their faith. We must respect it.

“Because for many other quarters, the Catholic Church seems to ride better with Muslims than other Christian denominations, especially on issues of ethics and respect for women and children,” Bishop Philip Naameh said.

He also said that as part of measures to further reduce the decline, they are increasing the presence of the church in chaplains and non-Catholic schools so that Catholic children who attend are not unnecessarily drawn to Pentecostal churches. and charismatic or One Man churches.

Reverend Philip Naameh also commended the Knights of Marshall for impacting the spiritual growth of its members through the various leadership roles played inside and outside the church.

He, however, urged them to enter catechism, adding: “The first thing that comes to mind is the assumption of the roles that our catechists play. You (the Knights and Dames of Marshall) have done very well but you are not doing the Catechism.

“At the University of Cape Coast, you will have a teacher who teaches catechism. He knows faith and he influences it,” he said.

“Some of our people who leave and enter some of these Pentecostal churches, it is also because they do not know the faith of the Catholic Church. But the spiritual formation that you continue to give to brothers and sisters helps you to mature, and a mature faith sees nothing but imparting faith to others.

“And I think with your help, we can connect effectively to prevent all of these things from happening,” Bishop Philip Naameh said.

The Noble Order of Knights and Dames of Marshall is a Catholic fraternal society. It was founded in Ghana in 1926 at Sekondi-Takoradi and also in 1972 at Tamale, marking the beginning of the Knights of Marshall in the northern territories of Ghana.

The Order also exists, among other things, to rally Catholic men and women for an effective apostolate and the advancement of fraternal relations, charity, unity and the service of God.

The one-year anniversary was launched jointly by Supreme Knight Sir Knight Brother Patrick Kobina Anumel and highly respected Grand Lady Sister Elizabeth Anderson-Yeuah with a call for members to continue to improve their spiritual formation for the growth and development.

The Supreme Director, Sir Kt. Vt. Bro. Cdr. Sir Edmund SK Kwaw whose speech was read for him by Noun Sir Kt. Pal. Anthony Coblah Kemavor, said the 15 Brothers of Council 27 Foundation, Tamale, philosophy has been a great success and it is the result of the tireless efforts of the brothers and sisters to go from failure to failure without loss of enthusiasm.

And it requires all to be enjoyed like the mustard seed sown on September 16, 1972 in the Archdiocese of Tamale which has now expanded to include the other four dioceses of the Ecclesiastical Province of Tamale.