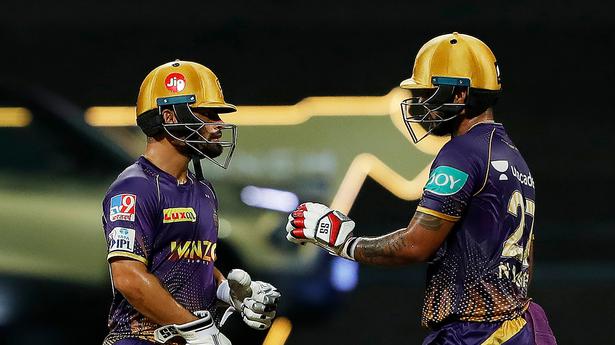 Spinners Anukul and Narine limit Royals to 152 before Shreyas, Rana and Rinku kick off

Spinners Anukul and Narine limit Royals to 152 before Shreyas, Rana and Rinku kick off

The spinners of the Kolkata Knight Riders proved too tricky for the batting Rajasthan Royals, helping the team to a seven-wicket win in their return leg at Wankhede Stadium on Monday.

Versatile Anukul Roy shone with the ball in his first-ever outing in purple and gold, finishing with numbers of 4-0-28-1 as KKR finally got their campaign back on track after five straight defeats.


Sunil Narine has been impressive as usual – but not on the pitch – conceding just 19.

After Shreyas Iyer’s men opted to bowl, Umesh Yadav provided the breakthrough with a blinder from his own bowling alley to send Devdutt Padikkal back to the dugout.

Karun Nair then fell to Anukul, who cleverly brought his length back. Riyan Parag also resumed the long walk soon after.

Samson, meanwhile, huffed and huffed to fifty before throwing a full delivery to deep midwicket.

Knight Riders quickly found themselves in a familiar situation at 32 for two of six overs.


The Royals had two of the three bowlers who took the most wickets against the Knight Riders in their ranks – Ashwin and Yuzvendra Chahal.

Rana, who wasn’t fired by Ashwin in the IPL, took the off-spinner in the 11th, hitting it for two fours and a six.

The 60-run, 43-ball partnership ended when Samson confidently asked for a referral after a wide call.

The call of UltraEdge


Although it looks like Shreyas played and missed, UltraEdge suggested otherwise.

Reimagining school through a Buddhist lens