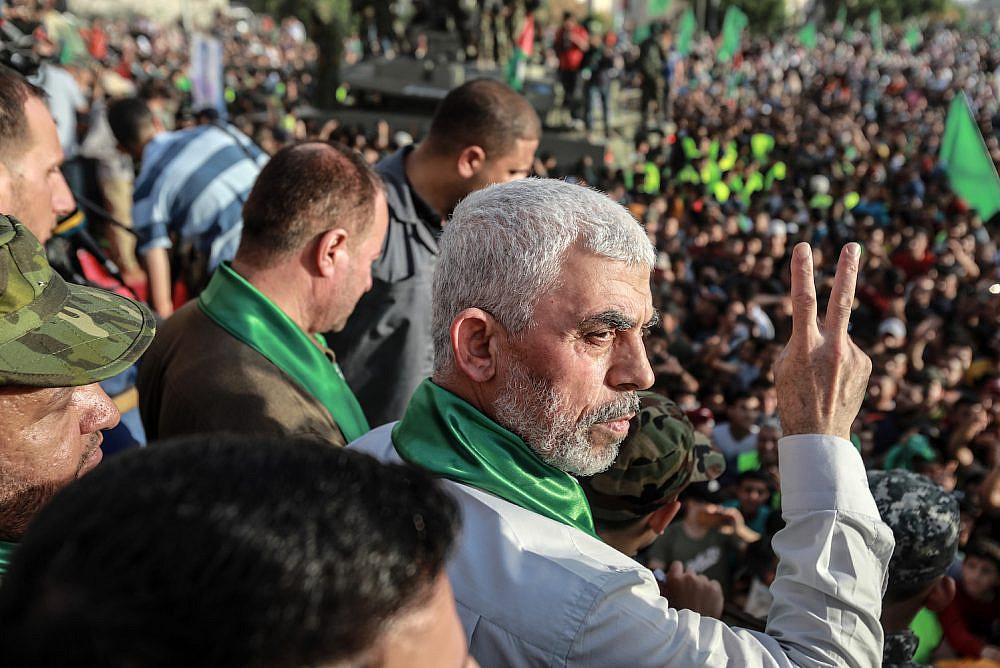 Hamas leader Yahya Sinwar and his intelligence staff didn’t need to tune into Channel 12, Israel’s most-watched TV channel, on Friday night to understand which way the wind is blowing in Israeli politics. They had probably already read veteran Israeli journalist Ron Ben-Yishai on Ynet, a popular Israeli news site, whose article launched the new push to kill the Hamas leader. A few days later, Channel 13 launched a poll asking Israelis if Sinwar should be assassinated. Almost 60% said yes, 20% said no and 21% said they didn’t know.

According to Ben-Yishai, Sinwar intentionally pursues a strategy of starting a regional religious war, similar to how Yasser Arafat started the second Intifada. In order to avoid this, Israel must choose between assassinating Sinwar or destroying Gaza’s infrastructure. This violent debate quickly made its way into the mainstream media and politics of Israel.

From his diagnosis to his prescription, there is not a single one of Ben-Yishai’s hypotheses that cannot be refuted, or at least seriously questioned. Moreover, the solution he proposes has already been tried on Arafat. Former Israeli Prime Minister Ariel Sharon staged an operation to assassinate him, and only President George W. Bush prevented it from happening. Instead, Arafat was physically besieged, which may well have hastened his death.

The Palestinian Authority establishment led by Arafat was destroyed during Operation Defensive Shield in 2002, when the Israeli military directly reoccupied West Bank cities at the height of the Second Intifada. In its wake, Israel allowed the reconstruction of the Palestinian Authority, this time under Mahmoud Abbas, on the condition that it operate as a contractor to the occupation on behalf of Israel. Meanwhile, the drastic harm that Israel has done to the people of Gaza, and its recurrent and systematic destruction of the Strip’s infrastructure, need not be specified. Ben-Yishai’s article testifies to the “success” of these actions.

It is important to stress that the problem is not limited to Ben-Yishai’s personal position – it is found throughout Israel’s political and security establishment. It is an approach that stifles new ideas, while anger at serious Palestinian terrorism is linked to political and leadership crisis and short-sightedness. Added to this is considerable frustration on the stronger side, when it becomes clear that the use of force is not bringing the expected results.

There is a vague feeling in the air – albeit suppressed and denied – that something has nevertheless changed in the fundamental parameters of the conflict over the past few years. I will summarize these changes in the context of recent acts of terrorism as well as Operation Guardian of the Walls/Sword of Jerusalem in May 2021.

Contrary to the perception that one man, Sinwar, is orchestrating the conflict – and that Hamas is responsible for clashes in Jerusalem and among Palestinian citizens of Israel – Hamas is instead trying to capitalize on the turmoil caused by Israel’s actions to Al- Aqsa Compound. The waving of the Hamas flag and the praise for Sinwar seen there is a show of support for a hard line against Israel, contrasted with submission and inaction on the part of Abbas.

This bubbling is genuine and bottom-up, not the result of incitement: Palestinians reject Abbas more than they are attracted to Hamas. In fact, it is a direct result of the governments of Benjamin Netanyahu and Naftali Bennett failing to enforce Netanyahu’s public pledge that Jews will not pray on the Temple Mount/Haram al-Sharif. 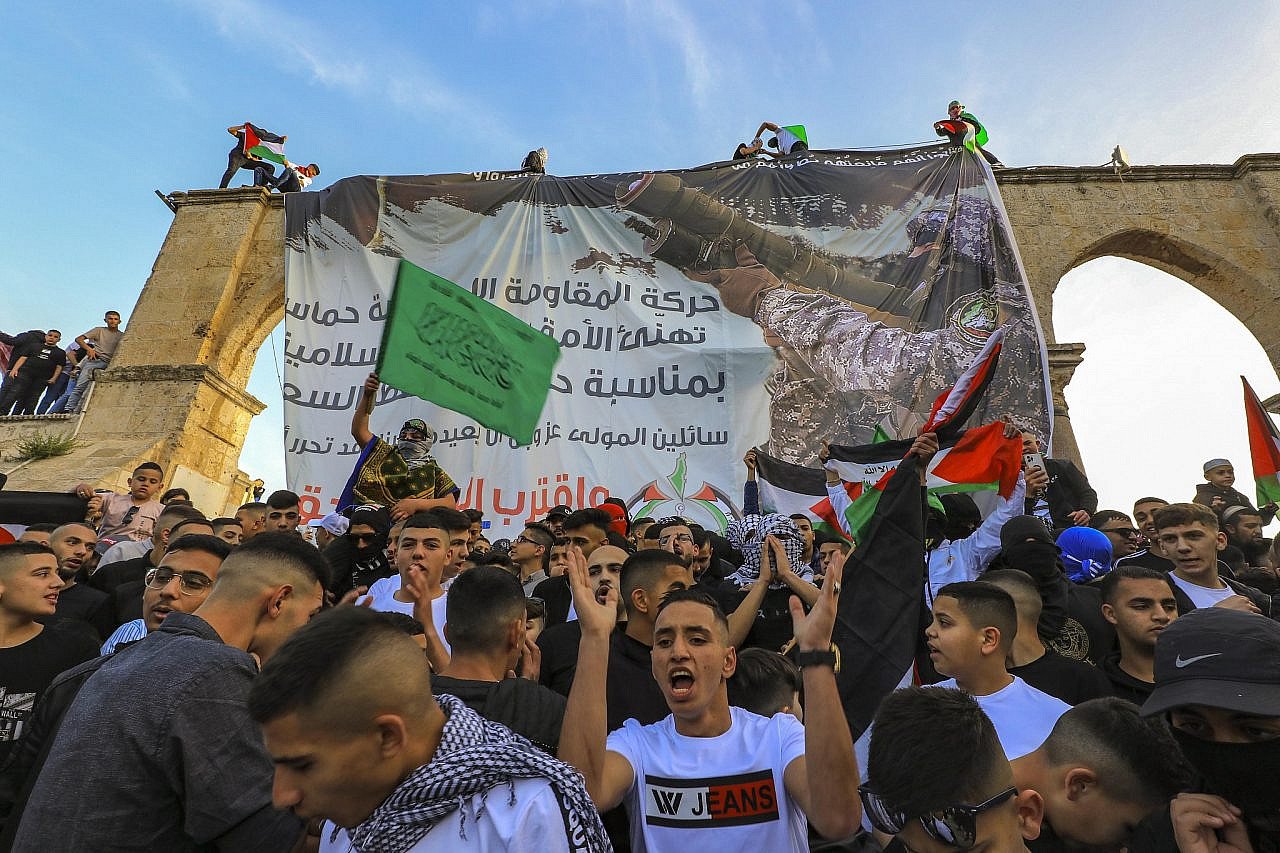 Palestinians raise flags and banners in support of Hamas at the al-Aqsa compound in Jerusalem on Eid al-Fitr, May 2, 2022. (Jamal Awad/Flash90)

An Israeli Democracy Institute survey released last week found that a majority of Israelis believe the government should impose Israeli sovereignty over the Temple Mount and allow Jews to pray there. This is a significant achievement for the Temple Mount movement, a term for various extremist Jewish groups that seek to overturn the long-standing religious status quo and “restore” Jewish sovereignty over the Mount. As can be seen in the photographs of Jewish worshipers and visitors to the complex, Haredi Jews, as opposed to national-religious Jews, are by no means a negligible minority among them.

This is not the same as tourists who happen to be Jews visiting the Temple Mount, as happened in 1967. Jewish visitors, almost all religious, are seen in Arab media as settlers – the driving force behind the expansion of Israeli sovereignty. The Temple Mount is where Jewish ritual, Israeli territorial expansion and crass nationalism collide.

In other words, the focal point of the Israeli-Palestinian conflict is not the Gaza Strip, but rather Jerusalem and the Temple Mount. The latter has always been the symbolic center of the conflict, but now it is also the active center, and extends from there to cities across Israel.

Contrary to the perception that clashes in Israel’s so-called mixed towns and Arab communities are only linked to the fringes of the West Bank and Gaza Strip, through “radical Islam”, this is a fundamental change. From the colonial fringes of Israeli expansion – the heights of the West Bank – the focus of the conflict has shifted to the country’s capital and major cities inside the Green Line. 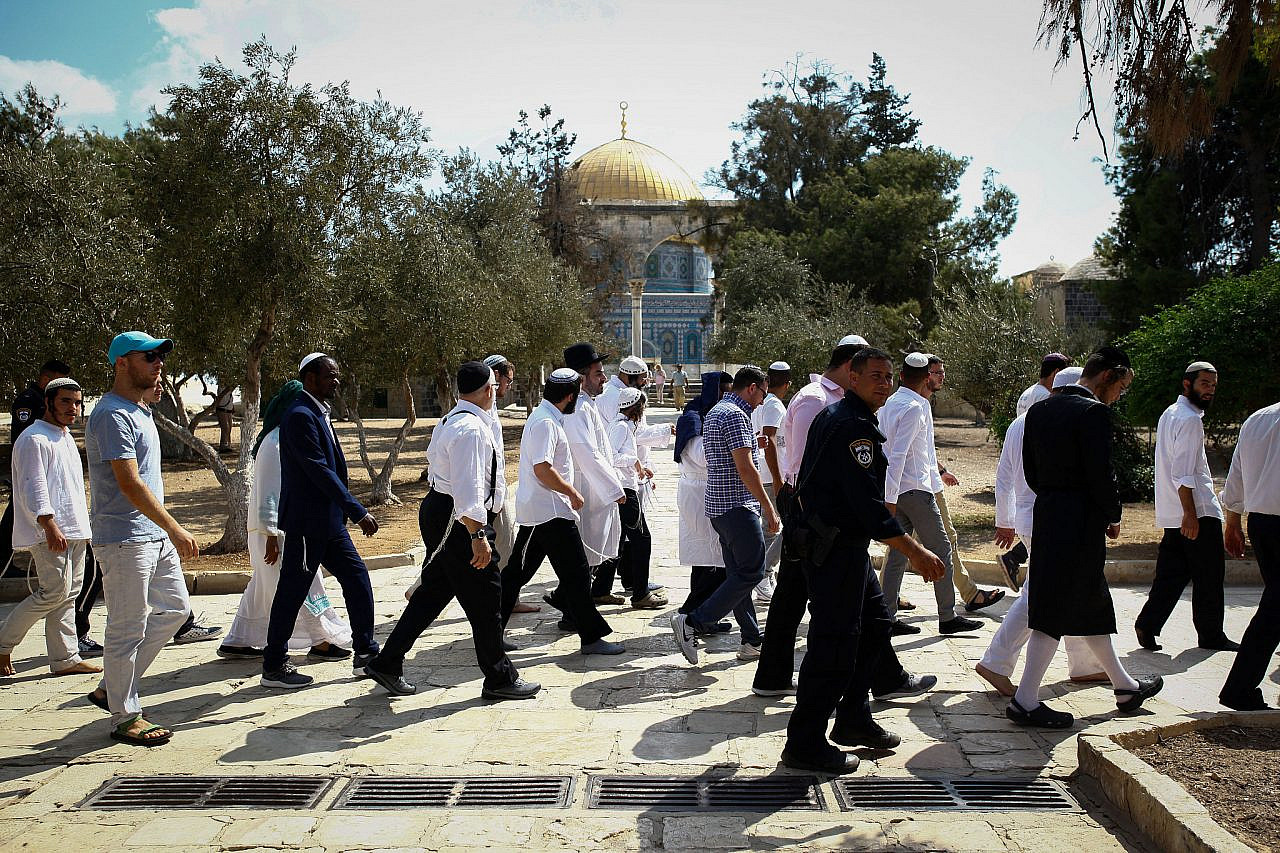 In previous years, the geographic and political fragmentation of Palestinians that Israel aimed to exacerbate could not prevent a unity of vision and symbolism between Palestinians in the West Bank, Jerusalem, inside Israel and in the Gaza Strip. But in reality, each community had its own priorities, which determined what to do here and now.

These divisions persisted until Israel lost its majority between the river and the sea, until a single Israeli regime was established in this area, and until there was hope for a border between the 1967 Palestinian Territories and the 1949 Sovereign Territories of the State of Israel.

Israel’s hope of maintaining this reality has evaporated with the expansion of the settlements and their de facto annexation. The geographical divide between territories with different legal statuses has collapsed. In its place is an ethnic divide, more entrenched than before, between Jews and Palestinians across the country.

This process had a direct impact on the Palestinian citizens of Israel. They are integrated into the predominantly Jewish society, but are also shunned by it — as the ethnic base of the state has grown considerably stronger, at the expense of the limited civic foundations offered to Palestinian citizens.

The younger generation of Palestinians in Israel are middle-class, educated and opinionated. They stand tall in their Palestinian identity and demand equality on the basis of their citizenship – not as a gift of kindness from the majority. As much as the Palestinian citizens of Israel are rejected by their fellow Jews, who fear the loss of hegemony, the former also identify with their own people. Through the narrow political interests of the Arab parties, it is possible to identify this pendulum swing within Ra’am, the Islamist party that is part of the current coalition, and between Ra’am and the Joint List. 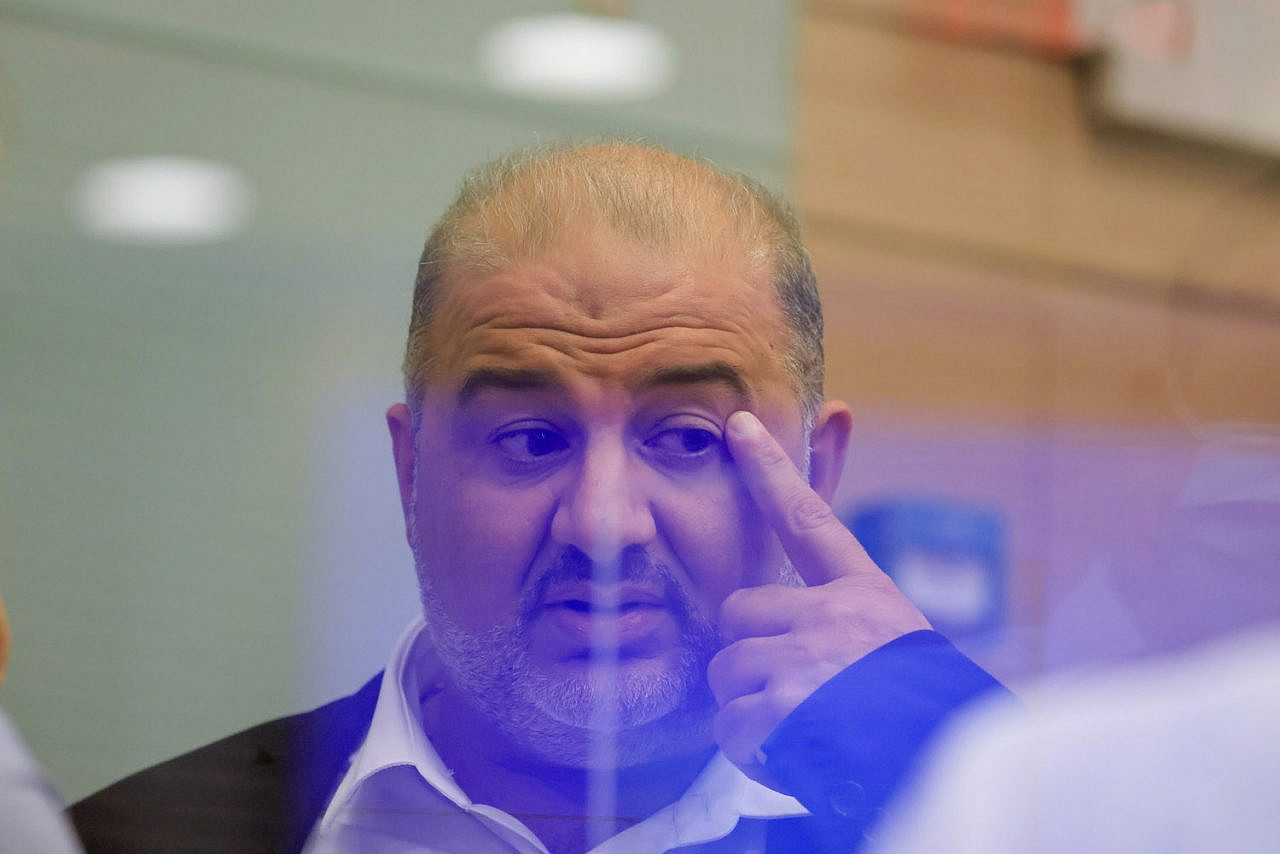 Contrary to its intentions, Israel’s policy of increasing work permits for Palestinians in Gaza and turning a blind eye to undocumented Palestinian workers entering Israel from the West Bank, does not “reduce the conflict”. On the contrary, the absence of Palestinian sovereignty and Israel’s reluctance to negotiate the establishment of a border, as well as the growth of settlements, have bound the entire region together under a single regime. The Abraham Accords, the pride of right-wing governments, transformed the Palestinian issue from a pan-Arab foreign policy issue into an internal Israeli issue.

These changes are mainly due to Israeli policies. The security establishment does not work to propose a different policy, but can only suggest how to maintain the status quo. Security forces may have even avoided pointing out the folly of the existing policy, given that they are full partners in its design and execution.

The political system is in permanent crisis, both politically and in terms of legitimacy. It is intellectually stagnant, blind and lacks courageous leadership in the center and left. Will only total collapse lead to policy change?

This article first appeared in Hebrew on Local Call. Read it here.