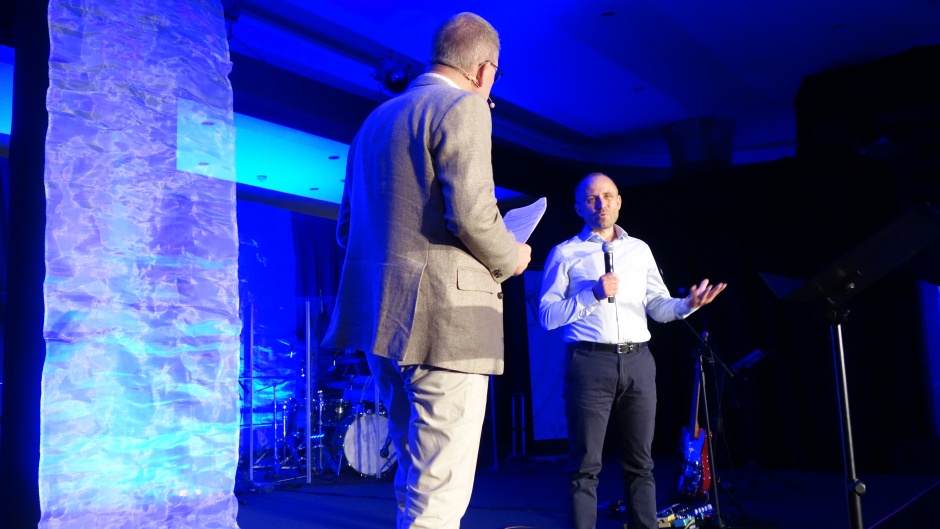 During the first evening of the European Leadership Forum (ELF), which this year brings together between 500 and 600 evangelical Christians, the war in Ukraine was one of the first topics of discussion. ELF Steering Committee member Stefan Gustavsson interviewed Jaroslaw Lukasik, who leads the forum’s work in Eastern Europe.

The core group of the Eastern European Leadership Forum (EELF) network is formed by Russian-speaking Christians from Belarus, Ukraine, Russia and Moldovaamong others.

“Ukrainians have lived in fear of this war for a long time. What is the reason for Russian aggression against Ukraine? asked Gustavsson.

“In the West, we have forgotten what war is, but war is always part of humanitybegan Lukasik. He said there were many reasons why Russia went to war and had no doubt about the main reason: “From my point of view, it is about the spirit of communism, which does not never left Russia after the fall of the Soviet Union. We condemned Nazism, but we did not condemn Communism. So when Putin saw the weakness of the West, that spirit came back, maybe with seven even worse spirits,” Lukasik said, referring to Matthew 12:45.

“It’s about rebuild the empire“, continued Lukasik. “The first victims are Ukraine and Belarus, which many Russians believe do not exist as separate nations. But Ukraine exists, and all the resistance Ukrainians put up is a testimony to the existence of the Ukrainian nation,” the pastor stressed.

“The Christian church must be under enormous pressure in this situation. What was his answer, what happened between the people of God? asked Gustavsson next. “Followers of Christ should be where there is pain and suffering, and I don’t know of any church in Ukraine that is not active. For example, many Christians help evacuate people from dangerous places. Churches have taken in hundreds of thousands of refugees,” Lukasik said.

According to the Eastern European Leadership Forum, there are over 14 million displaced people in Ukraine. The majority of them are still in Ukraine, in the west of the country, but many have also crossed the borders. In Poland alone there are 2.8 million refugees.

“At the beginning of the war, churches functioned as hospitals. It is also a great opportunity to give spiritual help to people, because people really want to pray now. War is a situation where you face evil, and then you need love,” Lukasik emphasized.

So how can other Christians pray for Ukraine and Ukrainian churches? “Do it! We need prayer, we need God. I believe that only God can help us. No one knows what will happen in a week, a month, six months. But we trust in God, so we have to pray,” Lukasik stressed, and clarified, “We should ask for victory. About victory for justice, for only justice can bring lasting peace, and on victory for the truth. I believe that prayers are precious to God when we can also act on our prayers. In the midst of this disaster, we see many beautiful responses in the form of solidarity, care and love from all nations. It’s great to get all this love,” Lukasik said.

A practical example is to start a partnership with churches or organizations that provide support to Ukraine. “And it’s important to be aware that the war can last a long timeand that the need for support can also be long-lasting”, concluded Jaroslaw Lukasik.

Adam Szabados leads the work of the European Leadership Forum in Hungary. He recalled one of the objectives of the ELF, namely to renew the biblical church and bring Europe back to the gospel.

Szabados spoke of a man he met while on a relief mission he visited in the western part of Ukraine. the the man had fled Irpin. Two weeks before the start of the war, his pastor had spoken of Acts. “The pastor told this man’s congregation that if we don’t obey Acts 1.8, what he says will happen”. In this verse, Jesus tells the disciples that “you will be my witnesses in Jerusalem and in all Judea and Samaria and to the ends of the earth”.

“It is about the scattering of the church in Jerusalem. ‘Maybe’, said the man I met, ‘God is doing something in Europe by spreading a lot of Ukrainian Christians in Europe’”.

Szabados showed a photo of a 16 year old boy who had been hosted by a family of his congregation. On his arrival, his first question to the family was this:Are you Christians? Because I am.” And he gave them a Bible he had brought with him. His parents aren’t Christians, but he is, Szabados said, continuing, “Two to three weeks later, I took the boy with me to a Hungarian high school, where he gave his testimony in front of at least a hundred students.

When the war started, Ukrainian refugees flooded into Hungary. According to Szabados, approx. 700,000 people were helped in Hungary, and about a third of the Hungarian population was involved.

There was chaos in stations, because every day tens of thousands of Ukrainians arrived. Groups of Hungarian Christians then went to the stations to clean the toilets so that the tired refugees could access clean toilets. It was a testimony to non-Christians in Hungary about Christian charity, Adam Szabados said.

Ukrainians are suffering greatly from Russian aggression. Millions of people have left their homes and many are homeless.

“Let us pray that the Lord will provide for them, perhaps through us, said the moderator of the forum”, and added something that was also close to his heart: “There are no Russian Christians here at the ELF conference at the moment. A new iron curtain has collapsed in Europe. Let us pray for those who are behind this iron curtain now, so that they can be good witnesses for their own nation in these dark times”.

The Soviet Union invades Hungary in 1956. “My father saw the Soviet tanks coming. He was a fierce opponent of communism all his life, but he always told us: ‘Don’t hate the Russians, they are suffering too,'” Adam Szabados said, concluding with a appeal: “Let us pray that this war may to renew Europe by the wondrous ways of God, and renew the church and help us evangelize. Let us pray for Ukrainian Christians and for the Ukrainian people, that God has mercy on them and that they know grace and justice”.

This article was first published in Norwegian in Sambaandet and used with permission.